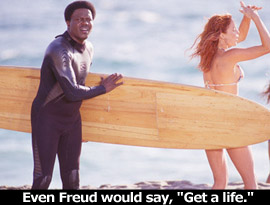 by Walter Chaw Even its subtitle an onanistic entendre, McG's excrescent Charlie's Angels: Full Throttle takes self-awareness to the level of pornography in what boils down to one of the most queasily interesting train-wrecks in recent memory. It leaves the joyful goofiness of the first film in the dust of the "wanton slut" school of feminism, uncomfortable innuendo (incest just isn't all that funny), and a parade of star cameos that would have derailed the film were it not already a mere series of references to other films. What the picture represents, in a very real way, is the death of cinema, swallowed whole by the same instinct that drives television: strobe cuts, shallow titillation, barely subsumed fetishism, gleeful stupidity... all fuelled entirely by a knowledge of medium. The picture doesn't have any sort of meaning outside of the cinematic--it's essentially a warm spasm of pop cultural goop, an extended succession of money shots with none of that distracting filler (plot, character, tension, purpose) that weighs down pictures exhibiting some measure of non-commercial ambition.

Alex (robotic Lucy Liu), Natalie (emetic Cameron Diaz), and Dylan (Drew Barrymore, terrifyingly, the brains of the outfit) are the titular "angels" at the intercom-beck of faceless Charlie (voice of John Forsythe)--a trio of vacuous life-support systems for doll-eyed female sexuality with a penchant for disguising themselves as burlesque dancers, lost Swedish backpackers (touring Mongolia in hot pants), and surfers in order to trap international criminals who get a good look before getting sent up the river. God bless America. Though it's fruitless to talk about it in much detail, Charlie's Angels: Full Throttle is about two rings, the witness protection program, three romances, Alex's inexplicably white father (John Cleese), Bosley's (Bill Murray, wisely not in this film) inexplicably black brother (Bernie Mac), lots of jiggling, and Demi Moore making a comeback as some sort of glassy-eyed lizard. The highlight of the piece arrives with Crispin Glover as his hair-huffing mute is given backstory in a convent (set to the goatherd song from The Sound of Music, of course) and a heroic moment on a rooftop.

Paced with the rudeness of a heart attack, Charlie's Angels: Full Throttle isn't a narrative so much as a checklist. To wit: it opens with a ripper of Raiders of the Lost Ark before touching base with Mission: Impossible II, The Thorn Birds, Cape Fear (1991), M.C. Hammer, and Terminator 2. Troublingly, T2's Robert Patrick plays a corrupt spook while evil Irish mobster Seamus (Justin Theroux) inexplicably replicates Patrick's liquid terminator's walk through a wall of flame, similarly unscathed. Reason has no place in the pursuit of rip-off, it seems, making the movie a lot like the not-really-anticipated conclusion to the Airplane! trilogy.

Meanwhile, people like Bruce Willis, Robert Forster, Eric Bogosian, the Olsen twins, and Pink strut and fret their flickers on stage, effectively trumping anything resembling an illusion of coherence, which again doesn't matter because Charlie's Angels: Full Throttle isn't really a movie. Three dance sequences exist in a vacuum (testing the sequel maxim that if one of something works in the first, three of that same something must work better in the second), Barrymore proves that she can't act in not one but three languages, and Jaclyn Smith turns in what may be the most bizarre self-referential cameo in recent history.

In fairness, there are two moments in the picture that hear the music. The first is the finale, set on a stage with Greek Tragedy scenery that ends, smartly, with a deus ex machina; the second is during the film's closing credits, when, for no particular reason, the girls spray each other down in the standard B-exploitation gratuitous car-wash sequence. Charlie's Angels: Full Throttle has, alas, too few moments in which it skewers popular culture and personal peculiarity--and too many moments that mistake being a neo-Dennis Miller wisenheimer for being intelligently post-modern. (Demonstrating that you paid attention during Flashdance isn't the same as knowing what made it work for its time, and why's it ironic in this time.) Charlie's Angels: Full Throttle is low entertainment for low men and impressionable little girls best described as "boom-boom" in all three implications of the colloquial onomatopoeia: the explosive (the non-stop pyrotechnics), the exploitive (the non-stop tits and ass), and, of course, the fecal. Originally published: June 27, 2003.