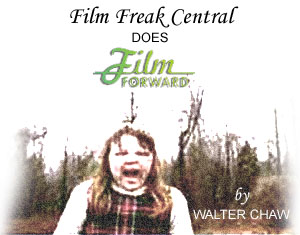 May 13th, 2003|An interesting move from an interesting company, Madstone Theaters is releasing six undistributed films, each for a one-week alternating run called "Film Forward". The first thought that comes to mind is that undistributed films are most likely that way for a reason. There's an old Tinsel Town axiom that applies to most of the stuff that winds up shelved for a lengthy period of time (View from the Top, A Man Apart, The Weight of Water): studios often don't know when something's good, but they almost always know when something's bad. The idea of "Film Forward" should be appealing, at least intellectually, for the movie-savvy audience that Madstone is trying to cultivate; the question with currency is, as it always is, whether self-confessed movie snobs will put their money where their mouths are.

"Film Forward" is therefore an extremely risky endeavour for both the audience and for Madstone. It's a gamble all but completely dependent on the courage of an audience that has consistently proven itself fickle and unpredictable, and on the judgment of Madstone's programmers in winnowing out the wheat from the volumes and volumes of chaff. Shot in a variety of mediums on a variety of shoestrings, the half-dozen pictures in the series are a mixed bag: a couple of genuinely excellent films (Soft for Digging and Bunny) share billing with a couple of unmitigated disasters (Seven and a Match, Te amo), with the remaining two films different shades of mediocre. Audacious to say the least, whether or not "Film Forward" proves to be a financial success for Madstone, it should be applauded as the sort of vital audience experiment in which niche theatres should be engaged. It doesn't matter so much in the final analysis whether the films are worth a damn; what matters is the guts to demonstrate that the fringe is a dangerous, unpredictable place nonetheless worth exploring.

BUNNY
directed by Mia Trachinger
The best Spike Jonze film not directed by Jonze, Mia Trachinger's Bunny is allegory writ large on the gritty canvas of American tragedy--an examination of the ways in which immigrants are treated as both scapegoat and romantic icon and of the manifest difficulties of interconnection. A ferociously unsentimental fable with a streak of surrealism and a deft comic touch, Bunny manages to capture the essential sadness of the human condition. Magnificent performances by Petra Tikalova and Edward Dratver as an Eastern European couple seeking asylum from their war-ravaged homeland anchor the picture's absurd story of a company that hires people to dress in pink bunny suits and bounce wordlessly on street corners. Issues of identity and occupation, of divorces human and societal, and even of the plight of the homeless and the diseased health care state are raised without actually being raised. Bunny is understated and beautiful, an unofficial adaptation, if you will, of Matt Groening's "Life is Hell" strip. We have here a film and filmmaker actually worthy of the overused description of "promising." ****/****

SEVEN AND A MATCH
directed by Derek Simonds
Glib to call it "Return of the Guilford Seven", though it occurs that "glib" is a pretty good term for Seven and a Match--that plus "derivative," "plodding," and "interminable." It's another reunion at another scenic locale commemorating another death (this time of central character Ellie's (Tina Holmes) parents); the best things about the picture are its use of Van Morrison's "Sweet Thing" over the end credits and a flat-out stellar performance by Heather Donahue that should be proof positive that her performance in The Blair Witch Project was, in fact, a performance--and a great one at that. Donahue's turn is all the better given the insipidness of Simonds's script, which, when it's not rehashing the plot points of John Sayles's Return of the Secaucus Seven with dogged loyalty, involves the usual uncomfortable dinners, unfortunate sexual liaisons, and inappropriate outbursts. Ellie is so poorly conceived and irritating, in fact, that it's a distracting head-scratcher first why she's so upset (the title refers to her insurance scam scheme to burn down her dead folks' million-dollar home), then why anyone in their right mind would put up with her shit for five minutes, much less this long, lost weekend of self-discovery. Seven and a Match is trying and tiresome, exactly the sort of film that gets made for its similarity to successful projects and exactly the sort of film that rots on a shelf when distributors identify, correctly, the unmistakable stench of mold. */****

SIDE STREETS
directed by Tony Gerber
A gentle roundelay structured around five immigrant groups struggling through the hottest day of the year in Manhattan, Tony Gerber's Side Streets sees the potential story in a literal melting-pot scenario, but squanders it in favour of meteorological symbolism and trite resolutions. Valeria Golino scores a few points with her iteration of the After Hours frustration of a struggling dressmaker, while the best part of the film centres on the Indian Raj family, consisting of a Bollywood legend, Vikram (Shashi Kapoor), who hijacks the middle-American home of cousin Bipin (Art Malik). The potential for the multi-cultural revelations springing from this variety of over-pond misunderstanding and class struggle are reduced in the other four stories to tales of serendipity and small victories. Side Streets goes for the heart-warming instead of the incisive, in other words, and at 131 minutes, it's easily half-an-hour too long. Shot with a nice, clean eye, the picture boasts of a certain technical proficiency and a game cast, but cliché writ sleek is cliché all the same. **/****

SOFT FOR DIGGING
directed by J.T. Petty
Shot for $6,000 on Super16, J.T. Petty's Soft for Digging serves as an often fascinating companion piece to Gore Verbinski's remake of The Ring in that both are nihilistic horror films revolving around little girls born utterly, irredeemably bad. While The Ring locates its enfant fatale as unapologetically evil, Soft for Digging finds itself on the side of its bad seed--to the extent that her therapeutic murder by trusted authority figures is something to be avenged rather than applauded. More importantly, The Ring, removed from its Japanese predecessor Ringu, is less about technological horror than progeny discomfort, informing the driving discomfort of Soft for Digging, with its two infertile protagonists (an old man, a little girl) merging to essentially fabricate a third, chimeric, crusading entity. Its special effects are startling and effective, and its almost complete silence (the first line is "murder"--the next line doesn't come for another hour) boils the genre down to its sinew and bone. With a wicked sense of humour and a few suggestions and images that are genuinely disturbing, Soft for Digging is an exercise in craft economical and brilliant. ***½/****

TATTOO, A LOVE STORY
directed by Richard Bean
A mini-budgeted version of Laurel Canyon substituting a rundown tattoo parlour for a swank home recording studio (and a Thelonius Monk-loving biker tattoo artist for a legendary record producer), Richard Bean's Tattoo, A Love Story is a mannered romantic comedy that's generally charming if ultimately a little stiff. Megan Edwards is lovely and dedicated (and shockingly thin in the Beckinsale fashion) as third-grade teacher Sara, desperately needing to loosen up. The all-grip wrench to her stripped hex bolt is Virgil (a cuddly Virgil Mignanelli), a tattooist tortured by endless inscriptions of Grateful Dead bears. Undeniably fun in a comfortably predictable way, the film follows the mutual flowering of the odd couple: Virgil eating sushi and unlocking his inner artist, Sara musing a career change and, of course, a tattoo. The standard conventions all in place (down to a sex-obsessed, comic relief best buddy (Benjamin Burdick) for the dude; uptight confidant (Kathryn Cherasaro) for the chick), Tattoo, A Love Story ultimately feels over-written and overly rehearsed. A talky, Don Roos-esque dramedy (with Woody Allen interludes ruminating on random tattoo experiences), it's not bad, but it's really just a decent version of something with a tremendous number of versions already. **½/****

TE AMO (MADE IN CHILE)
directed by Sergio M. Castilla
Harmony Korine without the poetry, Sergio Castilla's Te amo (made in Chile) is a vérité disaster, a film peopled with characters so grating that it adds up to 102 minutes of pure torture. Supporters will most likely argue that the picture presents teenagers at their most natural in a slice-of-life taken from the outskirts of modern Santiago, Chile, but the question should be whether there's actually any insight to be gained from depicting teens at their most annoying. Gravid high school philosophizing shares the Dogme stage with horrible ersatz Chilean folk-singing while Sam (Adrián Castilla), Brooklyn-born and cornball, has an illicit Oedipal affair with his insane nanny Ema (Tamara Acosta). It's a South American rendition of the suburban milk-fed blues, punctuated by shaky handheld work as the kids film their own home movies that, natch, reflect their unease through embryonic horror flicks. Te amo can be described as more of the same: amateurish and horrible. It's an endurance test that might pass the sniff test in terms of the insufferable lightness of being a teenager, but stinks to high heaven in terms of watchability and true value. */****