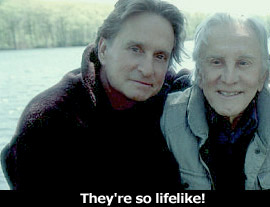 by Walter Chaw Appalling at its best, Fred Schepisi's It Runs in the Family is a congenital disaster best described as an interminable episode of "Old People Say the Darndest Things". Between this and Last Orders, Aussie director Schepisi seems to desire cornering the market on gravid meditations on decrepitude and death. He finds himself here a far cry from his Seventies output (The Devil's Playground, The Chant of Jimmie Blacksmith), which, much like countryman Bruce Beresford's early work, announced an important filmmaker who has, in the intervening years, become a hired hand and a coin of considerably devalued worth. It Runs in the Family is so relentlessly mawkish that it does give insight into the state of mind that allows condescension to become comfortable status quo by habitually marginalizing the elderly and demented as adorable dispensers of quaint homilies and spunky vulgarity.

Mitch Gromberg (Kirk Douglas) is a year removed from a debilitating stroke and the founder of a powerful law firm in which his son, Alex (Michael Douglas), has passed up a partnership. Finding himself at one of those mid-life crises the late-life Douglas loves to play, Alex flirts with a fatal attraction at the soup kitchen, earning the enmity of his mush-mouthed wife (Bernadette Peters), his loser son (real-life loser son Cameron Douglas), and his creepy youngest son (creepy Rory Culkin). (The film is not to be confused with Rory's brother Kieran's It Runs in the Family, the sequel to A Christmas Story.) Attempting to parallel the generation's storylines with a trio of love interests, a trio of similar disastrous resolutions, and a soft-headed reunion made literal in a perverse sleepover, It Runs in the Family sports the worst dialogue of the year in the service of what amounts to be an excuse to show real Douglas-family pictures and play with the puerile fantasy of parents long-divorced (Michael's mom Diana Douglas play's Kirk's wife) sharing a nice, long dance shot from multiple angles.

In the pursuit of that insistent self-love, all the women in the film either lust after or forgive the Douglas men (and Culkin, the honorary Douglas man) while nearly every one of the multifarious subplots is suddenly dropped in favour of endless golden-tinged tableaux. The high-gloss sheen of self-aggrandizing bullshit almost overpowering in of itself (the worst of it coming in the mass soul-saving of its final minutes), what really offends are the ways in which It Runs in the Family seeks out opportunities to function as a funeral pyre for the elder Douglas--a pulpit from which Kirk might wear his yarmulke, dance with Michael's mom, and struggle through a florid bouquet of embarrassingly transparent monologues that clarify the difference between "pathos" and "bathos." Heaped on top of the already considerable problems of the film is a certain inappropriateness as each generation of Douglas man "scores," then compares notes. It's a deeply unpleasant libido affirmation punctuated with hideous optimism by Paul Grabowsky's excruciating score.

It Runs in the Family has severe dysfunction in its editing and directorial decisions as well, featuring a surplus of exterior establishing shots that make no sense in context and lend a vague aura of peeping-tom voyeurism to the whole mess. In a way, Schepisi's decisions can be seen as a devastating critique of the film itself, demonstrating as they do the idea that the picture is essentially an unsolicited invitation to share in the Douglas clan's desire to make a shrine to the Douglas clan. It's a family freakshow complete with legless crooners, extreme flatulence gags, and Michael shrugging in a "he's so crazy" sort of way at Kirk's crusty bon mots. It Runs in the Family is a hundred minutes of long-takes and mugging and eight-year-olds who say "mug" when they mean "face." It's garbage of an unusual reek, and, ironically, destined to be memorable, after all, because of it. Originally published: April 25, 2003.