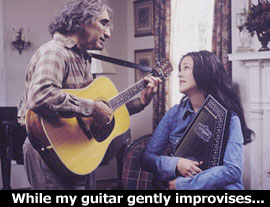 Undeniably funny for long stretches, there are moments in A Mighty Wind that take swipes at targets that can only be described as "easy." Transvestism and cults are addressed in ways condescending and obvious ("It's not like we ride around on brooms and wear pointy hats... Well, we don't ride around on brooms"), while Levy's character appears to be engaged in some sort of peculiar Jesse Jackson impersonation. Spontaneous moments of panic are as irritating as improvisation can be, and the film's centrepiece reunion concert indulges in a few faux-folk performances too many. Where the picture works is in its understanding that folk music, for a time, was meant to change the world: A Mighty Wind captures the deflated idealism of the movement--hijacked by corporate interests and fame--in the lingering hint of pre-hippie delusions of self-importance.

The genius in the details (particularly a series of album covers that in the film's subtlest moments takes on Simon & Garfunkel's best album "Bookends" and Crosby, Stills, Nash, & Young's "Déjà Vu"), the biggest laugh for me in the film is for the presentation of a gag rather than the gag itself: the audience's hysterical reaction presented as background, off camera (and via intercom), when a character introduces himself as "Terry Bohner." What A Mighty Wind lacks in consistency it gains in its spurts of inspiration; ultimately, though, the gimmick of the fake documentary feels stale and obvious, becoming an exercise in observing actors improvising rather than being taken by compelling characters interacting. Though there's nothing here as egregious as the literal two left feet of Best in Show, neither is there something as transcendent as Parker Posey's Dairy Queen monologue in Waiting for Guffman--placing A Mighty Wind north of unkind, but far south of inspired. It just sort of middles there in the doldrums between, funny by comparison to the rest of the drivel out there masquerading as comedy, and peculiarly stuffy because it knows it. Originally published: April 16, 2003.