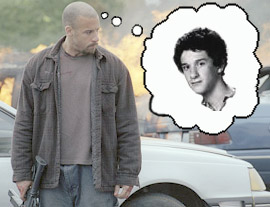 by Walter Chaw The one an absurdist sketch, the other just absurd, both Aki Kaurismäki's The Man Without a Past and F. Gary Gray's A Man Apart use violence as a catalyst for existential introspection, but while Gray's emetic excess deadens with its Death Wish-cum-The New Centurions wish-fulfillment fantasy, Kaurismäki's gentle fable finds grace amongst society's victims. Gifting their respective stars each with a hospital scene and subsequent resurrection and new lease on life, the two protagonists are paired with a lady love once back on the street--Kaurismäki's hero with a Salvation Army matron (Kati Outinen), Gray's with a ridiculously loyal partner (Larenz Tate) who discards his role as conscience to become an extension of a revenge plot that's made more ludicrous with a heaping dose of morality and a Lethal Weapon graveside penance.

Sean Vetter (Vin Diesel) is a hotshot DEA agent who brings down evil Columbian drug lord Meno (Geno Silva) only to have his wife (Jacqueline Obradors) gunned down and his angst aroused. (Diesel gives it his best shot, but he's not really an actor after all.) After recovering from his physical wounds, Vetter passes through a series of scenes carefully set up around moments where Diesel can intimidate each "bad" character in turn, preferably in a strip joint, before literally beating someone to death and losing his badge. What serves as a twist ending for A Man Apart, and the only thing genuinely resembling surprise in the bloodbath, is that Vetter gets his badge back just in time to be sanctimonious at the picture's finale.

Unrelentingly violent and unapologetically ridiculous, the picture is entertaining for long stretches based almost exclusively on Diesel's photogenic, David-Schwimmer-on-'roids presence and Gray's images-per-second, music video-honed savvy. It doesn't so much matter if the messages are excrescent and the action is impossible to follow, in other words, so long as the rigid guidelines of the action movie buddy pic are honoured. If not for my notes, in truth, I wouldn't remember five minutes of this picture without confusing them with other samples of the genre. As it happens, I do recall not understanding how a DEA officer can afford a Malibu beachfront property, which can't do much to recommend the piece.

Kaurismäki's The Man (Markku Peltola) on the other hand, appears to be some sort of metalworker who, on a trip to the big city, is brutally beaten, robbed, and left for dead. Flatlining for a while, The Man stumbles out of the hospital and into a subsistence level of existence in a broken-down trailer, a stray flea-bitten dog his only companion until he catches the eye of Irma (Outinen), a charity worker intrigued by his quiet good nature and work ethic. Robbed of name and the first part of his life, The Man is a Kafka or Beckett protagonist--a hero forced to mine his essential humanity for courage and clues to existential verities universal and essential. Recalling Socrates' "an unexamined life is not worth living," The Man Without a Past is endlessly hopeful about the ability for man to persevere in a capricious world; A Man Apart is unconsidered nihilism painted in broad, bloody strokes.

Robbed of their respective identities, where Vetter sets himself on the path of self-destructive machismo and preening, The Man locates true maturity not in vengeance and chest-pounding, but in the courage to forgive and evolve. Each film riding to some extent on its director's distinct storytelling style, where Kaurismäki trusts his cast to long rhythmic takes and excessively subtle moments of humour and grace, Gray's washed-out, seizure-inducing staccato takes on the confused flash and sizzle of a sloppily contained car wreck. The two approaches highlight the differences in not only technique, but also in a general philosophy of manhood--the comparison providing an eloquent expression of the two strategies for existence. In the most reductive terms, the two films are the turmoil of the Old Testament and (particularly in the unexplained resurrection of The Man) the imperfect covenant of the New.

There's a lesson to be learned in the disparity between the films: While A Man Apart bends over backwards to shock and excite, the only thing memorable about the piece (which sat on a shelf somewhere for over two years and was originally titled Diablo) is its courage (?) to be a "hard" R--this year's Swordfish without Halle Berry's million-dollar tatas. The Man Without a Past is packed with lasting images that speak to the heart of the travails of the human condition and, amazingly, to the strength to persevere that is mankind's gift and curse. Although Diesel's flexathon is certainly the wrong message in the wrong time, the only harm it can do is through the aggregate culmination of like-minded films--by itself it's instantly forgettable and just another mind-cluttering life drain. Kaurismäki's picture, on the other hand, is something of a minor classic that proves the dictum that whispering breeds listeners and shouting is only the worst kind of deafness. Originally published: April 4, 2003.