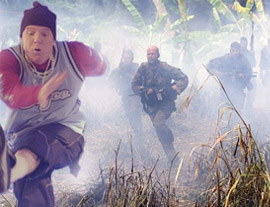 by Walter Chaw Antoine Fuqua's curiously timed Tears of the Sun is an unpleasant bit of jingoistic bullroar that seeks to redress the Clinton administration's refusal to intervene in the Rwandan genocide by offering up a small band of American special forces soldiers as saviour bwana bravely risking all for a white woman and, incidentally, restoring the son of a slain tribal leader to power. A lot like Schindler's List, for all the devastating scope of human tragedy involved in its story, the film is about the survivors and the white heroes, not the victims.

Martyr complex fully engaged and full speed ahead, Bruce Willis is AK Waters (apparently named after the gun), a stone-faced lieutenant in the Schwarzenegger "Dutch" mode leading a band of highly-trained übermensh on a mission of mercy. The similarities to Predator over the first half of Tears of the Sun are startling (complete with unwilling female charge, token black soldier, pursuit in jungle, and the guerrilla raid of small village); the only real difference is that where John McTiernan's film is a model of the action genre (and, along with Back to the Future, the defining film of the 1980s), Fuqua's Tears of the Sun is an exercise in style over disturbing message.

A propagandist piece for the United States' policy of intervention, the film conspicuously uses an incident in which we didn't intervene (see Steven Silver's brilliant The Last Just Man) as a device to offer some sort of atonement as well as rewrite history. Would that propaganda and revisionism were all the film was invested in; rather, Tears of the Sun sets its sights on racial issues (Token Black Soldier says at one point, "Lt., these Africans, they're my people. You're doing the right thing"), concluding on a pair of speeches offered by a tearful black nurse. The first promises The Bruce that the collective We "will never forget you," the second gushes to noble (and hot) doctor Monica Bellucci that the again collective We "we will always love you." The picture becomes at this point a snow job of the first order: The end-title quote of Edmund Burke's dictum about bad things happening when good folks stand idly by is at that point just atonal overkill (reminding a great deal of The Contender's closing dedication "to our daughters"), and the carefully staged fawning and Indiana Jones native supplication is simply out of place in a movie that takes on a deadly serious topic with occasionally graphic imagery.

The film is noble-savage racist and flag-waving in equal measure--and even misogynistic in not only Belluci's hand-grabbed charge, but also in offering a white priest an on-screen martyrdom as a white nun gobbles helplessly when the scene shifts, fixed eternally in a state of hysteria. Fuqua, an African-American director who's been trying his best to be David Fincher over the course of his sepia-stained career, stages a reasonably compelling village-liberation sequence (and a ridiculously over-hyped finale), but spends the rest of the time indulging in new-millennial action devices like cell phone communications, the GPS chase, and the laptop computer shuffle. Trying to add some excitement to scenes that are basically calls between Willis and commanding officer Tom Skerritt, Fuqua has Skerritt standing on the deck of an aircraft carrier as planes take-off and land behind him--good for reception, probably not so great for the eardrums. As the cavalry rides in at last to evacuate our great white hopes (though the black soldier survives, he's incapacitated and, unlike The Bruce, without the loving ministrations of a ridiculous romantic subplot), the awe that the heretofore desperate refugees massed at the Nigerian border displays for our Yankee whirlybirds doesn't suggest a citizenry hardened from years of modern Civil War, but rather a band of savages genuflecting before a Zippo.

As much as Fuqua is to blame for Tears of the Sun, Queen Latifah is to blame for the casually racist Bringing Down the House. Listed as one of the executive producers of the piece, Latifah's film isn't so much racial satire (like Blazing Saddles) as it is racial caricature (like the Friday series), positing every African-American character in her film as apparently unemployed or criminal and every white person as old, bigoted, and a CPA. A Mrs. Doubtfire conceit that finds the estranged father going drag as a black person to earn his "cool points" with his just-dating daughter and little dyslexic son, Bringing Down the House strip-mines the purported comedy of Steve Martin and Eugene Levy (and Joan Plowright) waxing Ebonic, while Latifah perpetuates every negative stereotype of the brassy African-American woman in what amounts to pride these days. Like the higher-middlebrow aspirations of Frida, Latifah's picture identifies feminism and racial pride as standing in contempt of "patriarchal" values like respect for others and respect for self--mistaking braggadocio and exhibitionist egotism for being proud of who you are.

A scene wherein Latifah pours liquid laxative all over an unpleasant old bird's (Plowright) dinner is stunning not for the old bird's crowing of a "Negro spiritual" but for Latifah's silent, burlesque gesticulations and expressions, which pay homage to the sort of grotesque Stepin Fetchit entertainments of yesteryear. But worse, that Martin even has a pink house-servant costume for Latifah to wear for Plowright's surprise visit suggests a dysfunction far more deeply embedded in the film's (and our collective) psyche. Two extended dance sequences allow Martin to display some of the insouciant freedom of his early work (and indeed, what is Bringing Down the House but a chance for Martin to unlock his inner Jerk? (A far superior racial satire, by the by--"You mean my skin's always gonna be this colour?")), yet the rest of the film (including a pair of woman-hating subplots concerning an Anna Nicole gold-digging sister-in-law and a cradle-robbing ex-wife) is a deadly trudge through the valley of hit and mostly miss.

That a few things are funny in a film about a crass woman who insinuates herself into a lonely guy's life through blackmail, bullying, criminal trespass, criminal misrepresentation (it's increasingly less of a surprise that Martin finds himself in this film: Between the boardroom presentation of The Out-of-Towners, the dinner discomfort of Dirty Rotten Scoundrels, the club hijinks of his wild and crazy guy, the home invasion of HouseSitter, and so on, Bringing Down the House falls out as something of a career highlight reel) isn't ultimately so very surprising. There are a few funny things about most alleged comedies. At the end of the day, it's more fruitful to identify whether we're laughing with the film (as in a scene where a drunken Martin gets love tips from Latifah) or at it (when Latifah speaks "white;" when Martin dresses up in hip-hop gear and affects the sort of ghetto-ese of which he's shown himself entirely incapable the rest of the film)--and that when we're laughing at something, we're not involved in a process of satire as much as we're celebrating (and by celebrating, perpetuating) exactly the sort of racial misunderstandings that are the furthest thing from hilarious. Originally published: March 7, 2003.