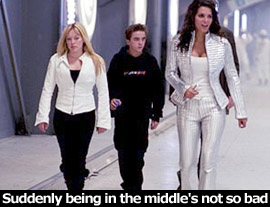 by Walter Chaw A pint-sized version of a James Bond film, Harald Zwart's Agent Cody Banks locates that series' fascination with modes of conveyance and breasts and places it cannily in the realm of early adolescence. It belongs there, after all, but burying Frankie Muniz's face in Angie Harmon's breasts (a second attempt is recognized and discouraged) is filmed statutory rape, even if he's not complaining. Its screenplay by committee (four writers, with a fifth credited with story) is flat and uninvolving (and feckless), with the sole highlight coming in a background PA announcement asking the owner of a silver Aston Martin to move it from the handicapped parking zone. Otherwise, the picture is just a collection of teensploitation formulas ("the bet" chief among them) married to a few weak gadgets and the same sort of world-saving wish-fulfillment fantasy that Bond has long since made stultifying and passé.

Cody (Muniz) is a fifteen-year-old CIA spook who finds himself recruited to woo T.S. Eliot-loving prep school tart Natalie (Hilary Duff), the daughter of a brilliant nanotechnology scientist (Martin Donovan) who's fallen in with the wrong crowd. Arch-villain Brinkman (Ian McShane) and his henchman Molay (Arnold Vosloo) have designs, it seems, on the destructive powers of the good doctor's microscopic robots and it's up to Cody to save the world--and get laid.

Sporting a sadistic ending that reminds a good deal of the one in Jackie Chan's terrible and similarly aimed super-spy spoof The Tuxedo, Agent Cody Banks deals in Bond-ian currency (like the opening action sequence, the suave party, the infiltration of the impenetrable fortress, the talking villain, and on and on) while indulging in kid-larks like a team of highly-drilled agents who do homework and chores. The picture is all too faithful to the James Bond franchise, in other words, feeling a great deal like Big Tobacco's efforts to make adult illnesses and addictions attractive to children. Its jokes generally predicated on leering at Harmon, leering at children, flatulence, and recognition of insular Bond tropes (most of which will be over the head of the picture's target audience anyhow), Agent Cody Banks is irresponsible and dull. Just another threadbare, gravely puerile James Bond movie, then--but marketed directly at your children, which is something to think about. Originally published: March 14, 2003.