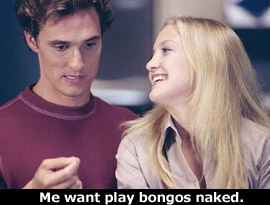 by Walter Chaw In the rush to anoint Gore Vidal blood relation Burr Steers the next Dylan Kidd (writer-director of Roger Dodger), I wonder how many people suspected that Steers's follow-up act to Igby Goes Down would be the conceptual lollapalooza of habitual bad director Donald Petrie's How to Lose a Guy in 10 Days. Only one of three scribes to blame for this mess, Steers seems to have contributed a certain smug misanthropy to the picture of the variety that fuelled the overpraised Salinger ape Igby, with Brian Regan and Kristen Buckley, the brain trust behind 102 Dalmatians, apparently responsible for the sentimental slapstick garbage that comprises the rest of the piece. What emerges is a shrunken chimera of a movie, hobbled by a pair of competing mainstream romantic movie contrivances ("One of them is lying. So is the other," assures the tagline), a self-knowledge of its own crapulence coupled with an inability to do anything about it, and a middle that, surprisingly, doesn't totally stink.

Andie Anderson (Kate Hudson) writes for one of those insulting women's magazines that a lot of women seem to really like and Benjamin Barry (Matthew McConaughey) is an advertising executive on the trail of a large diamond-retailer account. How to Lose a Guy in 10 Days is, at its empty core, a weird blend of that unwatchable "Just Shoot Me" TV show and Mel Gibson's unwatchable What Women Want--a misogynistic, hideously-scored excuse to elevate product placement to the level of an Austin Powers movie. Andie decides to write an article about how to act like a heroine in a Julia Roberts/Ashley Judd romantic comedy and thus scare away a man in ten days; Benjamin, in order to win the diamond contract away from a pair of scheming women dedicatedly joined at the hip like the Siamese cats in Disney's Lady and the Tramp, makes a bet that he can make any woman (read: Andie) fall in love with him in those same ten days. Oh the irony, how delicious. Wait, it gets better: this film was based on a book.

In truth, there are about twenty minutes in the middle of this shipwreck that work well. The disruption of a boys-only poker night, the creation of a virtual "family album," and the redoing of Benjamin's apartment in "early country estrogen" are strokes of mad brilliance that deflate, to some extent, the strange dementia that celebrates garbage like Sweet Home Alabama and the last ten Sandra Bullock films. The rest is a series of meet-cutes, lose-cutes, women with degrees from Columbia who believe that a fashion rag will one day allow them to write searing exposés on Russian splinter states, and men with six-packs and Grecian hair who also happen to be preternaturally well-adjusted bad-boy archetypes with a loving family. The visit to that family, by the way, is one of the more unlikely turning points in the entire antagonistic love affair genre--and but one way How to Lose a Guy in 10 Days swiftly becomes that which it so handily (for that twenty minutes) appears to be harpooning.

Titled like an edifying platitude, How to Lose a Guy in 10 Days actually instructs that if you suspect you've already seen it a hundred times, you probably have. That if things seem to be going badly, it's time to start looking for a party scene where the heroine can appear and turn heads; that star-cross'd lovers should watch out for well-meaning friends and stages and/or podiums with unguarded microphones; that Matthew McConaughey, after the 2002 he had (Frailty, Reign of Fire, 13 Conversations About One Thing), deserves to be in better stuff than this and The Wedding Planner... In a New York where Knicks playoff tickets are as easy to score as front row to the Céline Dion concert (Nora Ephron's), where it's funny to try to get your boyfriend killed by thugs and vegans (Woody Allen's), and where everyone appears to drink Budweiser out of immaculately displayed bottles, I guess we should just count ourselves lucky that the final reunion on a bridge doesn't involve Benjamin on horseback and Paul Young on the soundtrack. Originally published: February 7, 2003.