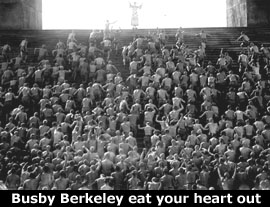 Even its supporters have no real use for its simplistic narrative, which reduces class resentments to the level of a lavish cartoon. Metropolis posits a cruel dystopia where a parasitic leisure class lives in the vast skyscrapers above ground while a subterranean working class works to keep it running; the latter are naturally restless and eager for change. They are promised a mediator "between the hand and the head" derived from "the heart" by Madonna-prophetess Maria, and sure enough, along comes Freder, son of Metropolis overseer Joh Fredersen, who falls in love with Maria and, in seeking her, uncovers the horror of the overworked masses. Unfortunately, Joh seems to see Maria as a threat, and, with the aid of mad scientist Rotwang, sends a robot Maria in to incite the masses to pointless riot. This, unfortunately, knocks the foundation of Metropolis out from under it and plunges the city into chaos--leaving Freder to uncover the truth and bring the two classes together.

Which is ridiculous. The dullest among us knows that quasi-spiritual figures like Maria are the toast of oppressive societies, as they distract them from meaningful action against material enemies--that's why Marx called religion "the opiate of the masses." In reality, the false Maria would stall the revolution indefinitely, quelling the riots instead of instigating them. Unfortunately, there's no big finish if that happens, and no wishful-thinking "reconciliation" to send you out in the open. And while the digital restoration that Kino has on offer shows us much more of the story--including a personal connection between Joh and Rotwang, and a subplot involving a worker who switches places with Freder--than previous cuts, there's still no getting around the fact that the narrative is a total boondoggle.

This needn't have been a big problem--silent films, by and large, are not noted for their narrative complexity. But there's a lack of feeling here that the best silent films use to transcend their material (think Pabst's poetics of tawdriness, or Murnau's sensual fluidity) and make you respond on a primal and emotional level. Lang, despite his reputation as a master, doesn't bring a personality to the film--it's not a work of camera poetry so much as an attempt to take in its brilliant and enormous sets with a minimum of nonsense. Nonsense, however, is exactly what this movie needs, as it would lift the clunky narrative and boxy camera placements into a metaphorical level that it so desperately needs to retain credibility.

It is easy, however, to see why someone might choose to overlook these matters, as the film's design is justly famous and responsible for a handful of indelible images. There is the eerie tableau of a man turning what looks like the hands of an enormous clock, trying to catch the lights that appear beneath the numbers. There is the skyline of Metropolis itself, in its mad art-deco extravagance and excess. And there is the haunting vision of the robot Maria, surrounded by discs of flame and showered with electricity, as it goes from gaunt-eyed machine to hot-blooded vixen. These are all images that the film-obsessed must see, as much for their value as referents as for their intrinsic qualities--but I must stop short at faint praise, as I find Metropolis more interesting as a source for other filmmakers than as a work in its own right. Like its city gone mad, it lacks a heart to mediate between its hand and its head, resulting in a film that is big, beautiful, and ultimately sterile. Originally published: January 15, 2003.