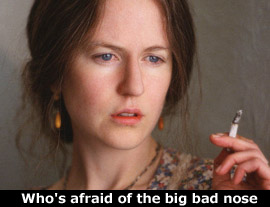 by Walter Chaw Nicole Kidman is a wonderful Virginia Woolf--a distracted mess in a film that is a literalization of that description. The only real problem with Kidman's performance is her prosthetic nose--it's a no-win situation in which The Hours finds itself: allow Kidman to look like Kidman as Woolf and there will arise such a clamour of voices; make Kidman look like Woolf and not only is it impossible to stop looking for the line at the bridge, there will still arise such a clamour of voices. The problematical manipulations and presumptions of the rest of the film are as difficult to overlook as the nose stuck on Nicole's face: The Hours is mannered to no good purpose, glowering with no good justification, and the sort of artificial construct that presents life lessons writ large by a cadre of talented performers who recognize a mainstream prestige piece when it presents itself. The only thing that separates The Hours from garbage like A Beautiful Mind (last year's odds-on favourite to disappoint people who care while pleasing people who don't really give a damn and don't remember the morning after anyway) is that its marquee disability is being a woman and, apparently, being a lesbian.

Like the Pulitzer Prize winning novel, Stephen Daldry's The Hours is interested in how birds are metaphors for women (nests, eggs, and so on), how water's mutability is also a metaphor for women, and how infertility can cause even the staunchest of feminists some existential problems. Woolf opens the film by trying to drown herself in a river; Laura (Julianne Moore, essentially reprising her role in the superior Far From Heaven), trapped in the 1950s, continues the film by failing as a homemaker and contemplating suicide in a deluge of a magical realism; and Clarissa (a wan Meryl Streep) in the present finishes The Hours as the embodiment and namesake of Woolf's Mrs. Dalloway (the novel Woolf writes throughout the film and Laura reads). The thread of historical depression/feminine oppression, then, lays heavy on Daldry's loom but not nearly so heavy as the weight of symbol and subtext dragged screaming into text. It's a testament to Kidman's performance that she almost carries off playwright David Hare's adaptation (between her turn here and Daniel Day-Lewis's ramble through Gangs of New York, two Oscar winners have all but been chosen); it's a testament to the insurmountability of the problems of this particular adaptation that Streep and Moore appear wholly incapable of lending weight to their oddly insubstantial characters.

Lying jealously down in tall grass next to a dead bird, Woolf contemplates her unknowable deeps--a passable melodrama made unbearable by a train station monologue in which articulation dispels the soft night of suggestion. Likewise, Laura's fluttery incapacitation and her ineffectual husband's (professional ineffectual husband John C. Reilly, and haven't we all had enough of him now?) dim-witted toe to the status quo (compare to Christopher Walken's amazing performance in Catch Me If You Can just as you compare Moore here to Moore in Far From Heaven) are passable melodramas again made simpering by Hare's overwritten screenplay and, to an extent, Michael Cunningham's source material, exposed on film as simple-minded bodice-ripping on a literary scale. The worst of the temporal sisterhood is Clarissa who, fussing over a party for her AIDS-stricken cause and ex-lover, poet Richard (Ed Harris, running completely now on a sense of self-satisfaction), has a breakdown over lobster bisque, contemplating the unbearable lightness of her being.

The film is about escape from societal restrictions, Blake's "mind-forged manacles" perhaps, and perhaps again of the women's own devising. Laura's grave apologia for her rejection of the patriarchal idea of order ("That was death. I chose life") is also a puzzling rejection of progeny, timing her abandonment as she does after the birth of her second child. (The Hours appears to want its anti-patriarchal and anti-matriarchal cakes and to eat them both.) Her firstborn son, also named Richard, is extremely sensitive to his mother's plight and will, in time, probably write his own morbid, autobiographical novel-length allegory and take flight in imitation of Woolf's doomed bird. Afflicted by her sister's (Miranda Richardson) rowdy boys, Woolf finds any biological progeny a distant, distasteful impossibility, dismissing her severe niece with a "goodbye, little girl" that sounds more like another literary lament than a detached farewell. That all three storylines are invested to some extent in a non-biological reproduction--and that Clarissa's ultimate triumph seems to be in somehow having birthed a compassionate girl-child (Claire Danes, remarkably good)--is just one of those things that is best mentioned to incite and then dropped in polite company.

Too meticulously arranged and too simplistic by half to merit the kind of gravitas ladled upon it by Daldry and company, The Hours is a hypnotically dull, relentlessly downbeat, laughably predictable wail pitched to the cadence of a depressed fifteen-year-old's suicidal poetry. It's unseemly to laugh at, but it's almost too embarrassing not to--the combination of Daldry's cutesy cross-temporal matching shots and the script's heavy-browed dedication to marching into the river with a pocket full of rocks so loaded and posed that its message that women just gotta have a room of their own almost matches Magnolia's message of "be nice to your children" in terms of the "no shit" factor.

And yet all would probably have been forgiven if The Hours hadn't taken such pains to tie every loose end to an expository anchor. The picture's condescension is what ultimately provokes so negative a response: the belief that no matter how overpoweringly simple the underlying message, that its projected audience will need a hand to guide them. It is that (in a film directed by a man and adapted by a man from a novel by a man) that should ultimately inspire the most pause in an audience ostensibly full of women presumed to not only need their problems reduced to patriarchal homilies, but to also have that reduction explained to them in the broadest possible terms. Originally published: December 27, 2002.