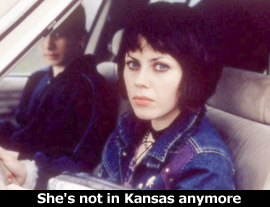 by Walter Chaw Three short films about three women and the men who mistreat them, Rebecca Miller's DV triptych Personal Velocity: Three Portraits is a fine-looking film that plays a little like Catherine Breillat-lite--a series of iterations of Yeats's "Leda and the Swan" that suggest the evil that men do to women only makes women stronger. Emancipation for Delia (Kyra Sedgwick), battered wife and renowned slut, comes in the form of a handjob given a grateful backwoods hokum in the front seat of his beater; for book editor Greta (Parker Posey), in the separation from the mediocrity of her milquetoast husband and pocket dictator boss; and for runaway Paula (Fairuza Balk), in the latent maternal instinct she discovers through the betrayal of a young hitchhiker.

The last segment is the least optimistic of the three: In resolving with our heroine deciding to keep her baby, it caves in to the sort of nuclear tradition dissected in the first two segments. About a betrayal, it is, in fact, a betrayal of the feminine nihilism of the rest of the film; that Ms. Miller wrote this segment after knowledge that her book of short stories would receive a cinematic treatment is interesting in light of its air of pandering. Delia's and Greta's stories, ending as they do in cheap sexual empowerment for the former (bittersweet, to say the least, but possessed of some currency in the Britney Spears/Christina Aguilera forged feminism) and a rejection of home and hearth for the latter, both locate themselves as a variety of entertainment invested in exploring the gender divide while giving short shrift to the male of the species: ineffectual parasites or vicious predators.

At the least, Personal Velocity finds a home for a trio of courageous performances from its main actresses: a performance by Sedgwick invested in her desperate willowy physicality; by Posey in a more piquant version of her familiar castrating intelligence; and by Falk in a heightened, frenetic emotional intensity. The trio, well cast according to their strengths, are given opportunities to form fully-fleshed characters with the aid of a nicely metered narration and innovative direction incorporating still photography and an excellent soundtrack. Its highlight the middle section starring Posey and concerned with the toll that masculine pursuits like predatory promiscuity and career aspirations sometimes have on devalued institutions like marriage and family, more's the pity that Personal Velocity ends with its weakest segment. The picture is a noble experiment, made nobler by the opportunity for strong characterizations for women, but it also confuses its message with an ultimate desire to please--contorting itself into an idea of expectation is the last thing any of these three actresses, nor their characters, deserve. Originally published: December 20, 2002.