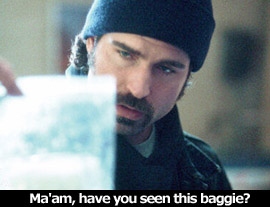 by Walter Chaw Anchored by a powerhouse performance from Ray Liotta, Joe Carnahan's Narc is a police procedural buddy psychodrama that reminds a great deal of Sidney Lumet's underappreciated Q&A. The first film mounted in part by Liotta's new production company, the film is fond of the kind of fluid tracking shots popularized by Martin Scorsese (and Goodfellas, as it happens) and has a crackling ear for dialogue that sadly doesn't translate into a gift for monologue. Still, there's a rough intelligence and visceral edge to the film--hewn from its tough-talking vernacular and graphic violence--that feels great in an era where both sides of the ratings divide: PG and R, are hell-bent on edging into the grey PG-13 arena where mental adolescents and the easily-diverted play. Narc works largely because it's a mature film for adults, smoothing over some of the rough spots where the film begins to lose itself in a labyrinth of flashbacks and surprise revelations.

Detective Oak (Liotta) isn't nearly so solid as his namesake, one of those lawmen who's lost a wife and is working through his psychopathic shellshock on the bowed backs of the unfortunates under his jurisdiction. Detective Tellis (Jason Patric, playing the same role he played in Rush with slightly less facial hair) is the catalyst for truth that his namesake implies, one of those lawmen who's losing his wife when he's drawn back into a profession that he's sworn to abandon. When the case of who killed Det. Oak's partner is given to ace undercover narc Det. Tellis (on permanent hiatus since his accidental shooting of a pregnant woman), the two find themselves in an uneasy partnership that threatens to expose a sordid history of corruption, violence, and the general ugliness of life in the drug underbelly of a big city.

Its plot clearly not the selling point, Narc works, when it works, because of the conviction of its leads (Patric can be an exceedingly dull actor, but he's excellent here) and a dirty flamboyance that only exceeds second-time filmmaker Carnahan's ability a time or two. The opening sequence, shot with a blue filter and a frenetic handheld perspective, is harrowing and disturbing, while a few middle sequences of interrogation and investigation bristle with invention and menace. (The standard bulletproof-vest cheat is neatly avoided, and an interview with a venereal disease-afflicted junkie has an off-kilter unpredictability that is genuinely memorable.) Clearly aspiring to be a film with a '70s sensibility, it ultimately betrays the courage of its performances with a conclusion that, besides being slightly confusing, appears to let everyone off the hook--a critical quailing that most of the classic cop dramas of that seminal decade avoided and one that ultimately dooms Narc as not much more than a mood piece and an actor's workshop. Originally published: December 20, 2002.