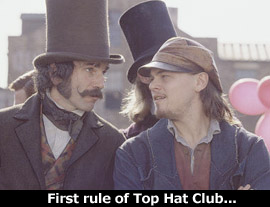 by Walter Chaw Beginning as Martin Scorsese's Apocalypse Now, Gangs of New York, at the end of the auteur's thirty-year dream of it, more resembles his Titanic. Buoyed on a tsunami of dark rumors of behind-the-scenes clashes (the line "Please don't make that sound again, Harvey" registering as either a jab or a plea to Miramax head Harvey Weinstein), eleventh-hour cuts, and release delays pushing the film nearly a year from its projected release date, the picture is a booming, period-exact mess: disinteresting, unbalanced, and burdened by the weight of too much ambition blinding an artist to his celluloid offspring's congenital, mortal defects--hubris redefined for the postmodern age. Though sprawling, it reduces to a series of vaguely-connected dramatic snippets that largely fail to anchor the film to any specific place (exception being a visually, viscerally arresting stream of coffins unloaded from ships ferrying the dead from the frontlines of the Civil War). It's a malady exacerbated by the fact that the same five or six characters--played, with one stunning exception, as tepid variations on banal--seem to be everywhere in New York at all times.

Amsterdam Vallon (Leonardo DiCaprio) as a child sees his father (Liam Neeson) murdered in an 1846 street brawl between Irish gang "The Dead Rabbits" and a nativist uprising led by the terrifying/hilarious Bill the Butcher (Daniel Day-Lewis, in an already legendary turn). Flash-forward sixteen years as Amsterdam gets off a boat from somewhere, throws his Bible into the waters of the new world, and vows that avenging his father's death is his sole purpose. To that end, Amsterdam befriends furtive Johnny Sirocco (Henry Thomas), beds cutpurse Jenny (Cameron Diaz), and makes his way to the trusted right hand of Bill, who, with his glass eye turned forever to an American eagle and armed with a giant cleaver and belt of throwing knives, rails on about the evils of Abraham Lincoln and the distastefulness of the Irish.

There can be no real complaint about the expense lavished on the production. The sets representing nineteenth-century bellum New York are as detailed as they are hollow and showy. With a similar amount of swooping aerial perspective shots of a teeming, filthy landscape on the verge of anarchy as Peter Jackson's The Lord of the Rings: The Two Towers, Scorsese by his lack of context and odd detachment adroitly comments on the difficulty of crafting an epic that balances the needs of the few with the demands of circumstance. In attempting to address that gulf, Gangs of New York succumbs to the worst kind of patronizing condescension as Scorsese first inserts a perfunctory love triangle (dismissed offhand by fictional Bill at one point, Scorsese refuses to let go), then relies on the sort of footnoted flashbacks that remind the audience periodically of what's happened and which characters have already been introduced in a different context. A unifying symbol of a blood-stained straight-razor is even cross-referenced to mark the beginning of the film's finale--a narrative crutch more indicative of a first-time director unsure of his ability to compel and cohere (and contemptuous of his audience besides) than a man revered by many as one of our greatest living filmmakers, if not the greatest.

Performances by Day-Lewis and Jim Broadbent as back alley politico Boss Tweed (the cavalcade of ridiculous character and gang names ("Slaughterhousers," anyone?) is less side-splitting than wearisome) demonstrate the sort of eccentricity required to transcend the bombast of the production--they're the only two in the film (save a wasted Brendan Gleeson, perhaps) to understand that Gangs of New York can only really be taken seriously as, ironically, a melodrama. Images of a stage production of "Uncle Tom's Cabin" ending in an actor playing Lincoln being pelted by vegetables hint at the sort of picture this should have been; images of an elephant rampaging through the Draft Riot streets suggest that bread and circus dispenser P.T. Barnum's dictum was mostly correct.

The violence of the picture is extremely uneven. Except for its opening rumble (a shocking failure, given Scorsese's gift for screen violence) and its closing rumble (ending in a fountain of blood that's funny given the squeamishness of the build-up), Gangs of New York spends a great deal of time looking away. Though a pig corpse gets a lot of abuse in one of the stupider Oedipal bonding moments in recent memory, in the picture's universe, punches don't bruise, neck wounds don't bleed, and what's meant to be a horrifying disfigurement turns out to be a tiny cherry-coloured scar easily consumed by the shadow of DiCaprio's perfect cheek bones, or handily obscured by his dainty locks. The potential balance provided the film by Irish barber/sheriff Monk (Gleeson), a figure as imposing and dangerous as The Butcher, is squandered with a fecklessness both puzzling and lamentable. Asking petite milquetoast DiCaprio to play the role of foil to Day-Lewis's Method madness is sadly just the most glaring of a multitude of miscalculations.

DiCaprio and Diaz are a ruinous pair: neither can hold their accents, though the strain of trying seems to sap all discernable energy suggesting that the film would have benefited, Prince of Thieves-like, by the decision just to let them speak as they will. They are a vortex at the centre of the film, an unlikable, unbelievable hero and his plot-device wench (thief, whore, mother protector)--an abyss made worse by Thomas's plot-device nebbish (ally, betrayer, martyr). Gangs of New York is three hours of barren harangue that essentially serve as a showcase for Day-Lewis to receive his second acting Oscar. Having frittered away about 140 minutes on teen romance and obscure portentousness, its half-hour finale is edited so desperately that it almost satirizes the rest of the film--subtitles announcing locations affected by the Draft Riots (and wouldn't Bill be on the frontlines of such an event rather than ignorant of it utterly?) function mainly as a reminder that we've just spent a long, long time not having the first clue where anything is by itself much less in relation to any other place.

With myriad questions unanswered (unasked, even) and an impressive set impotently waiting for something interesting to unfold upon it, Gangs of New York is a major disappointment. Day-Lewis is either in the wrong film or the one that should have been, his ham-eloquent excellence a perfect evocation of the Scorsese anti-hero (Bickle, Pupkin, LaMotta, Hill) in all its baroque swagger and psychopathic menace. That he stands out sharply from the rest of the production (and that his character's twisted code is ultimately betrayed by the horrible screenplay of co-writer Jay Cocks (script doctor for Cameron's Titanic--physician, heal thyself)) is a sad commentary on just how derailed Scorsese is at the helm of an epic and at this point in his career. Gangs of New York lacks artistry, vision, coherence, and fascination--a familiar yet confusing yarn that feels for all the world like a runaway train, its conductor's last recourse faith, reputation, bullying, and the hope that his next collaboration with Leo and Harvey, a biopic of Howard Hughes (!), can pull him out of his tailspin. Originally published December 20, 2002.