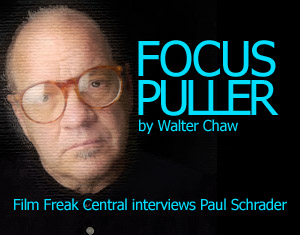 December 17, 2002|A pivotal member of the small group of film-school 'brats' to single-handedly manufacture in 1970s America what is arguably the most important and vital decade in the history of the medium, Paul Schrader (screenwriter of such seminal texts as Taxi Driver and Raging Bull and writer-director of Hardcore, Blue Collar, and Light Sleeper, to name a few) follows up his brilliant Affliction and his disappointing Forever Mine with the new film Auto Focus. Another in a line of Schrader-helmed biopics (Mishima, Patty Hearst), Auto Focus follows the rise and mysterious murder of "Hogan's Heroes" star Bob Crane, locating the TV actor as a man discovering his masculinity in an ascetic, downbeat way reminiscent of the work of Schrader's hero, director Robert Bresson.

FILM FREAK CENTRAL: Your long-running themes of celebrity and addiction resurface in Auto Focus.
PAUL SCHRADER: Well I don't know if it's so much about celebrity. I see Bob Crane pretty much in the same way I saw Wade Whitehouse (Nick Nolte's character from Affliction. -Ed.). I'm interested in characters quite often--but not always--who act in counter-productive ways: people who want to do or be one thing but behave in a way that undermines it, which I guess is the heart and soul of Freudian analysis. Certain people live it large--in a case like Bob Crane, who was walking around saying, "I'm normal, I'm a family man," while all the while a tail trails out behind him... In a case like his celebrity just becomes an enabling factor that allows him to become more counter-productive and self-destructive.

So you saw Crane as another version of the classic oblivious Schrader protagonist?
(laughs) I sort of like these clueless characters. But usually in the films I've done, the character sees the picture for a moment--Wade Whitehouse sees the picture, he has to kill his father, but Bob (laughs), Bob never sees the big picture--he doesn't get it.

Which is certainly ironic given the title of your film.
Right, right--the film is set before the invention of the auto-focus device on cameras so the title is sort of a play on that word--something that literally means "self-absorption."

After you were given the script for Auto Focus (based on the book The Murder of Bob Crane by Robert Graysmith), what changes did you make--what drew you to this project, another biopic?
I had kind of been turned off by biopics, I'd been offered so many of them: John Holmes, the Mitchell Brothers, but my agent said, "You should really read this one," so I did and at that point in its development it was really more of a conventional biopic, but I saw underneath it this really fascinating subplot which was sort of an American, heterosexual, TV star version of Prick Up Your Ears plus the fact I saw my familiar protagonist in Crane: someone who's sort of (laughs) clueless and can't line up his behaviour with his self image. I was able to rewrite it and bring out the elements that were interesting to me.

Why are you attracted to these types--do you see yourself reflected in them to some degree?
I'm not sure--I like them and I think I'm good at them--I am attracted to the psychoanalytic process, y'know, trying to sit there and figure out "if I want 'A' then why am I doing 'B'?" That's really what's at work here. Fortunately Crane wasn't that well known--sort of like Jake LaMotta in that way. You had enough room to reach into his life to create scenes and themes that would be credible and also have that power of fiction.

Besides Ozu and Bresson, of course, I know that you admire William Faulkner. What's the commonality and how do they all influence your work?
That's rough, let me think. The openness of the myriad possibilities of life and how you don't scrimp on the detail, you don't simplify the psychological realism. The way you keep a viewer or reader involved without simplification really strikes me as the pinnacle to which an artist should aspire. You have to remind the actors not to simplify. Conventional Hollywood cinema dictates that you simplify everything--each character has a simplistic throughline so that the audience is supposed to know very clearly by the end what to feel. If you're not careful an actor can fall into that trap and make their characters very much more simple than the actors are in real life, and so you have to remind them that it doesn't necessarily all make sense. I'm not sure why he's saying that, I don't know why he's doing this--you have to give actors the confidence to act within an ambiguous context.

There's also the element of the microcosm unfolding against the macro of the story in these artists' work that I think you touch on.
Truth is always in the details--it's never in the big statement and whenever you see a work that leads to a big statement, you know that truth is not being served.

In dealing with truth, how do you decide how far to go with fictionalizing true events?
It's a balance. There're two responsibilities, the first is to history as you know it and as you know, history is not a simple thing. We can both walk away from this meeting with two very different versions of what happened, but you have to be very faithful to the facts as you discern them. And secondly you have the responsibility to drama which is not necessarily the traditional truth--it has to do with themes and tensions, the exploration of issues--and at some point you strike a balance and say, "Okay, this is fair enough to history--and this is fair enough to drama, and I'm okay now." You can go over the line, you can do things dramatically that they are such an affront to history that they undermine the credibility and drama of your story.

Tell me about working with an independent and independently raised budget.
It's rough, it's rough y'know, we had seven-and-a-half million bucks and thirty-three days, but it has its pros and cons--the con is that it's not much, the pro is, it's enough.

Part and parcel with that budget is the necessity for your actors to work on scale or deferred payments--am I right in saying that this is your fourth collaboration with Willem Dafoe?
Willem's a friend--I met him on the set of Last Temptation [of Christ] and worked with him on Light Sleeper and then used him again in Affliction.

You seem attracted to a different quality in Dafoe--what is that quality and does it play into your theories about non-simplification?
A number of directors like to use Will for sort of his over-the-top quality, that manic energy. I've always found that other aspect of him more interesting--that is, his vulnerability and his neediness. I think when he plays weak characters he's always more interesting. That and the fact that I knew him and could get him to work within the price--and that he looked a little like him--is why I wanted him for John Carpenter. I also liked the way that Will and Greg [Kinnear] played off each other--sort of "Oscar and Felix make a porn movie." (laughs) I think that building a character is about the accretion of detail. It's not about the big scene, or the big speech, it's about how all the little details build up--sometimes they line up, sometimes they counter-pose each other, and finally all those details start to have a combined weight which is greater than all the little pieces.

You do get final cut with that budget.
Oh yeah, I mean whatever I could do with that money and those thirty-three days, I did and it was mine. It's interesting because now I'm just about to embark in my first major studio film in twenty years. It has a lavish budget--at least lavish by my standards--and I'll be interested to see how my indie sensibility embraces that expanded freedom.

You're talking about The Exorcist prequel? Are you in pre-production?
Not yet, just about. It's the Lancaster Merrin (played by Max Von Sydow in 1973's The Exorcist -Ed.) story in 1946--as soon as I'm done with a few more things around here, I'm flying down to Morocco. (Editor's note: filming is now underway for a 2003 release.)

And did I hear that you got Stellan Skarsgård for Merrin?
Yeah, wonderful, wonderful actor. Liam Neeson was going to do it but for one reason or another Liam started to have second thoughts. He was involved before I was involved when [the late John] Frankenheimer was going to do it and as soon as Liam started getting weak knees, I said, "Goody." I wanted to get Stellan in there and we made it happen.

Do you feel trepidation taking on a franchise and a big budget?
No, they came to me with the picture, my first big budget mainstream project in twenty years, and besides I've always had confidence in myself. If there's something I see that I can do and is worth doing--confidence-wise, I've never had a problem. This Exorcist picture does precede the Georgetown story by twenty-five years or so--it's 1946 and in Africa so I'm really relatively free of all that baggage. It's a script by Caleb Carr that I've rewritten and I figured that if I can trace something of interest to me and exploit the inherent interest that comes with the franchise, then maybe we'll have something that works as both a personal film and a widely appealing one.