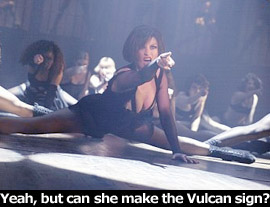 by Walter Chaw As adaptations of stage musicals go, Rob Marshall's film of the Bob Fosse revue Chicago is professional and slick, if lit too darkly and oddly flaccid. Its musical set-pieces are generally excellent, with a trio of performances from Renée Zellweger, Catherine Zeta-Jones, and Richard Gere that surprise with their versatility and verve, but the unevenness of Marshall's direction lends the picture a sort of confused rhythm that threatens to stall it during every narrative stretch. Buoyed by Sam Mendes's recent Broadway revival of another Kander and Ebb classic, "Cabaret", "Chicago" suffers from a distinct slightness, its attack on the evils of media culture not so much current as battered to death by decades of same. Chicago offers no surprises, then, only really coming to life during a press-conference scene with Zellweger the dummy and lawyer Gere the ventriloquist and puppet master. It's gorgeously shot and choreographed and throws the malaise of the rest of the picture into sharp relief.

Roxie Hart (Zellweger) is an aspiring burlesque chanteuse in dark Chicago, married to a schlep (John C. Reilly, professional schlep) and banging a furniture salesman (Dominic West) on the side. When things go sour and Roxie plugs her lover with three shots from hubby's snubnose, she finds herself in the slammer under the iron fist of Mama Morton (Queen Latifah) and block-mates with fallen songstress Velma Kelly (Zeta-Jones), herself doing hard time for killing her lover and her sister in flagrante delicto. Hiring celebrity defense lawyer Billy Flynn (Gere), Roxie becomes the toast of the town--at least until the next big thing.

Never firmly locating itself in either reality or theatrical fantasy, Chicago undermines its own forward momentum time and again. Exteriors have a nice CGI-recreated look to them, while the fanciful stage interludes do a nice job of advancing narrative in that rugged Fosse way, but there's something jarring in the frenetic cutting of the dance and the lazy tracking of the exposition. Less exciting and innovative than Baz Luhrmann's bombastic Moulin Rouge!, Chicago tempts championing as a return to the movie musical--sufficient to say, however, that nice performances aside (Zellweger, in particular, surprises), the film is more promising as a continuation of a welcome trend than an unqualified success. Originally published: December 27, 2002.