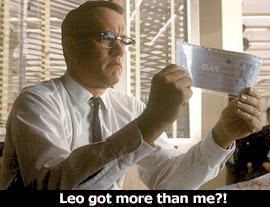 by Walter Chaw There's an old Ray Bradbury story from 1948 called "Touch and Go" (since reprinted as "The Fruit at the Bottom of the Bowl") that tells the tale of a burglar who surprises the homeowner in his house and accidentally kills him. Erasing his fingerprints from a few surfaces, the burglar panics and starts wiping objects in rooms he hadn't visited and items, such as the fruit at the bottom of a bowl, he could not have handled. When the police find him hours later, he's in the attic polishing old silverware. Like Bradbury's thief, Spielberg is getting away with murder in most of his films post-Close Encounters of the Third Kind (particularly A.I., Minority Report, Schindler's List, Empire of the Sun, and Saving Private Ryan) until self-doubt and paranoia consume him, seducing him to a fatal eleventh-hour appeal. Spielberg is the bad test-taker, changing his answers to damn his instincts.

Desperate to be taken seriously as an adult filmmaker, he submarines his strengths (the cult of childhood, his visual genius) with the untenable weight of his pretension (and unintentional condescension, embodied in his stale association with composer John Williams)--enough so that his films are among the few that can actually be completely undone by their conclusions. Without its concluding half-hour, Minority Report would be among the best films of the year; without its "cufflink" speech, tying the film uncomfortably to the structure of E.T., Schindler's List would deserve the popular reverence laid at the foot of its pandering pedestal. (The less said about the appalling final twenty minutes of A.I., the better.) Spielberg asks at the end of his beautifully puerile flights that they be reconsidered as think-pieces as profound as they are technically meticulous, and they simply do not--cannot--bear up under that kind of scrutiny. Scrutiny, in fact, is the last thing his films can withstand--something that early escapist fare from Spielberg like Jaws, Raiders of the Lost Ark, all the way back to Duel, understood. Catch Me If You Can is perhaps the first of his pictures that survives a deeper analysis.

The opening credit sequence of Catch Me If You Can (by graphic arts company Kuntzel & Degas) harks back to the animated geometric lines of Hitchcock's North by Northwest, and its main character, Frank Abagnale, Jr., reminds of that film's Oedipally-arrested chameleon Roger Thornhill. (The films even share an interest in hotel room numbers, women as commerce and camouflage, the mistrust of contracts and written communication, and modes of transportation.) But, fascinatingly, Catch Me If You Can resembles Hitchcock's pictures in general in its self-mocking self-awareness: Spielberg's film is a canny satire of American culture and cinema, and, shockingly, a sly auto-critique of his decades-long pandering to the lowest common denominator; to the blinding flash of materialism; and to his almost pathological desire to restore nuclear order at the cost of any faithfulness to theme and mood. The picture's Rockwellian denouement is first a red herring, then, in its obligatory end-cards, dark and ironic, verging on the derisive.

The movie is not without its moments of ham-fisted manipulation (there remains whiffs of Spielberg's panic that no one notices he's being clever), but Catch Me If You Can is the sort of film rich with subtext and a healthy self-deprecation missing too long from, and admittedly believed to be beyond, Spielberg's canon and ability. Seventeen years after Spielberg's first attempt at growing up (his egregious misfire of an adaptation of Alice Walker's The Color Purple), the enfant terrible of American cinema at last has matured. This is his best (and by that I mean to say "closet nastiest") and meatiest since Close Encounters of the Third Kind.

Frank (Leonardo DiCaprio) is the son of charismatic failure Frank Sr. (Christopher Walken) and his French war bride, Paula (Nathalie Baye). Like Spielberg's own parents, Frank's separate, leaving the kid to his own imaginative coping mechanisms, which, in both cases (Frank's and Spielberg's), parlay into limitless riches and a constant terror of being found the fraud or, somehow worse, taken as a fool and a naïf. Desperate to make enough money to somehow facilitate a parental reunion, Frank impersonates a Pan-Am pilot, a lawyer, and a doctor while perfecting his "paperhanging" check forgery technique. Hot on his trail is FBI fraud investigator Carl Hanratty (Tom Hanks), who lives a life of Spartan modesty while constantly outwitted by his slick quarry--the contrast between the moral searcher and the immoral reveller made repeatedly in matching shots of Frank in luxury and Carl in institutional squalor. (Even its opening sequences in a French prison present Frank, ill and bedraggled, cast in a Dumasvian romance and Carl doing his best not to be soiled by a persistent, humiliating leak.)

Shooting Catch Me If You Can's authority figures and seduction scene in the same reverential low-angle, Spielberg's camera comments on both the director's latent anxiety/infatuation with institutional power (see also: E.T., Schindler's List, The Sugarland Express) and the same anxiety/infatuation with sexual women that makes the majority of his films' arrested Oedipal waltzes around fetishistic power figures, sexualized children (Frank, 16 as the film begins, uses his mastery of artifice to get laid with regularity--similarities to Spielberg's life conjectured), and awkwardly asexual mother figures and castrated fatales. A fake check left to press and dry in a Bible, a master conman's tutelage before the flickering machine-aphorisms of "Dr. Kildare" and "Perry Mason" (and a family tableau facilitated by Mitch Miller's "Sing Along with Mitch"), even gently self-chiding vignettes involving a trio of Jewish printers and a fixation on comic books (no accident that the Spielberg-directed episode of "Amazing Stories" ("Mission") features a cartoon deus ex machina) further serve the picture's richness and possibility for auteur examination.

Frank's squeamishness masquerading as an emergency room supervisor, nauseated before the bloody aftermath of an African-American child's bike accident (!), comments on Spielberg's sometimes-confused treatment of race, children, and violence, and a final, pathetic sequence in which Frank discovers that he's been replaced doubly in his estranged mother's affections is presented with a looking-glass separation that, again, is a shrewd metaphor for the impotence of Spielberg's litany of manufactured appeasements. With a fascinating scene in which the contents of Frank's wallet are revealed to be a collection of product labels he's obsessively debrided from various packages, the picture provides thrilling (and thrillingly mute) commentary on the ties between advertising, media meta-culture, and the modern cinema defined in large part by Spielberg's contributions to the medium. That Frank's habit of ripping off labels is later used as a breadcrumb for Hanratty and, farther on in the same sequence, that Spielberg makes a brilliant reference to Hanks's Forrest Gump character in a floating C-note, are choices that ring with a cinematic savvy we should expect from a man who is possibly our greatest living visual filmmaker. Until Catch Me If You Can, however, that expectation has been frustrated and betrayed.

Catch Me If You Can's technical perfection is matched by a performance by DiCaprio that rekindles the actor's early, pre-Titanic (pre-Gangs of New York) buzz, as well as a turn by the always interesting Walken that captures the actor's warmth and autocratic air of melancholy. Hanks is the weakest of the three principals, saddled with a bizarre Hyannis Port accent that serves the idea of separation between Spielberg's godheads and mortals, but the alien-ness of which tests credibility on a narrative level. The picture, save that minor misstep (and Hanks is likable enough a presence to overcome his affectedness), is a breezy entertainment matched by a wonderfully nourishing subtext--a film that allows Spielberg to flex his visual muscle while exploding the criticisms and tenterhooks that have made many of his most celebrated films adolescently obsequious or pitiably naïve. The director gets away with murder in this, his most personal film: With Catch Me If You Can, he finally leaves the silverware polishing to us. Originally published: December 25, 2002.