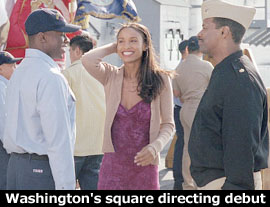 by Travis Mackenzie Hoover Taking one look at the cover of my press kit for Antwone Fisher, a critic friend of mine sneered and said simply, "Ah. Oprah meets Dr. Phil." But he was more right than he could have ever imagined, because it's the whole culture of obsessive therapy which that gruesome twosome represent that poisons and kills what could have been a real movie. Instead of training its eye directly on the events that traumatized its eponymous lead (and real-life screenwriter), Antwone Fisher substitutes people talking about them in a therapy setting--a terrible mistake that robs the film of any dynamism and does little to distinguish it from the mountain of inspirational stories that pile up on daytime television.

It pains me to come to that conclusion, because the film is clearly well-meaning, and the triumph over a cruel past it depicts is real. The film finds naval petty officer Fisher (newcomer Derek Luke) in trouble for the umpteenth time for his hair-trigger temper; he's clearly got some wells of anger inside, but in therapy-melodrama style, nobody is sure why. Landing in the office of psychiatrist Jerome Davenport (Denzel Washington), he stays on and reveals his terrible childhood--his father was murdered when he was very young, his mother gave him up to foster care, and his foster mother was a self-hating black woman who beat him at every possible convenience. But Davenport takes a liking to Fisher, and mentors him as he struggles with his secrets and hits the road to recovery.

As the film progresses, more is revealed, and in theory one should be moved by the confessions as they shed light on Fisher's condition. But it doesn't happen. The film's construction as an extended therapy session gets in the way of coming to grips with these events: they are so completely and easily explained by the Davenport character that they prohibit a more experiential understanding. The film seems to know all too well what Fisher's problem is, and while it's hard to deny credence to the screenwriter's own story, he's not very good at evoking--instead encapsulating--the patterns that governed his life. The therapy structure denies an active role for the audience in which they realize for themselves what happens instead of assuming that the filmmakers know, and as a result the film becomes a series of cue cards without dramatic weight.

But if the filmmakers are less than adept at narrative construction, they're more than up to the challenge of repeating a series of hoary Hollywood clichés. Joy Bryant is given the thankless task of being Fisher's movie girlfriend, the kind with no personality of her own, existing purely as ballast for the male lead--and she's forced to be smiley and genial at the expense of her sense of character. She's joined by a series of plot points from deep in the vaults, from hostile characters who give information when it's required to uses of (bad) poetry to reveal sensitivity. And Washington's direction, while professional, is just as standard and familiar, using too many master shots and not enough visual imagination. The point is not simply that it's gauche to approach the story this way, but that it reveals the boxy thinking of the filmmakers, who rely on convention movie past for expression as opposed to finding their own language for the very specific challenges of the material.

Like I say, it's hard to pan a movie with this much pain and goodwill behind it: it seems akin to denigrating the experiences it tries to evoke. But a movie is not just a series of traumatic events told in flashback--it's a perspective on those events, an ability to generalize about them and find new ways to contextualize them. Those looking for a successful Antwone Fisher are advised to look in Terence Davies's oeuvre, or in Lynn Ramsay's Ratcatcher, as they are eloquent enough to make their traumas live in the mind and eye. Instead, we have a film that approaches the podium, reads off the facts, and beats a hasty retreat, explaining at once too much and not enough. Originally published: December 20, 2002.