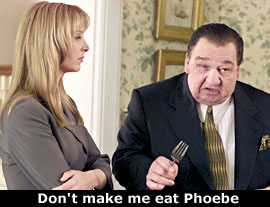 by Walter Chaw The first mistake that directors make with actors who need to get brought up sharply against the reins now and again is that they sometimes request of them to feign that which they already are. Case in point is asking Robin Williams to be a gibbering velvet clown, asking Melanie Griffith to be a side of beef with a betsy-wetsy voice, and now asking of Robert De Niro to feign mental illness and sociopathic tendencies. De Niro jumping on a table and singing selections from West Side Story isn't one of those cinematic moments for the ages, but rather one of the more tragic examples of self-delusion and career torpor.

The newest De Niro movie once a cause for celebration and excitement is now a visit from the demented uncle fallen on hard times: every Showtime, The Adventures of Rocky and Bullwinkle/City by the Sea/The Score/15 Minutes/Men of Honor/Meet the Parents is another example of a veteran actor on cruise control (compare his corpulent late career with Jack Nicholson's splendid one) who, with every one of his new roles, seems intent on darkening of every one of his past performances. In Analyze That, the sequel to feather-light mug-fest Analyze This (and the predecessor to the inevitable Analyze the Other Thing), De Niro, perhaps running out of classics to deride, resurrects the mistake of his crooning Jimmy Doyle from New York, New York--bad idea the first time, bad idea again.

Incarcerated mob boss Paul Vitti (De Niro) fakes mental illness to get out of the slammer and into the protective custody of Jewish shrink Ben Sobel (Billy Crystal) and his brittle wife Laura (Lisa Kudrow, who plays brittle better in The Opposite of Sex). Ostensibly an arrangement for Sobel to prepare Vitti for a parole hearing (and wouldn't Sobel be bright enough to note that Vitti isn't up for parole?), the real reason for Vitti's release is for the inept feds to tail him and arrest his evildoing cronies. Sitcom situations cascade and implode into one another like a rusty Slinky jerking its way down diminishing sequel returns as Crystal does his thing and De Niro does his thing. An orgasm joke reminds of a better orgasm joke in Crystal's When Harry Met Sally, a baseball bat joke reminds of better baseball bat jokes in De Niro's The Untouchables (or Bang the Drum Slowly), and Reg Rogers as the director of a "Sopranos" riff reminds of a better Nathan Lane joke.

Jumping from a Mel Brooks-ian farce to a jarring psychodrama (complete with "home movie" flashbacks to Vitti's dulcet childhood) to a whimsical heist intrigue with nothing in-between approaching rhyme or reason (the careless, rushed quality of the piece demonstrated by boom shadows and hideously mismatched shots), Analyze That is a disjointed vignette mob comedy lacking the rhythm of Demme's Married to the Mob and the cheerful awfulness of Johnny Dangerously. At one point Ben asks, "It's gonna get worse?" To which Vitti sagely responds: "It ain't gonna' get better." When a film so succinctly criticizes itself and the future of its franchise, it saves all of us a lot of time. Originally published: December 6, 2002.