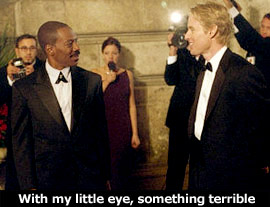 by Walter Chaw The best bit of dialogue in Betty Thomas's abysmal I Spy, a film saddled with a hack director and a too-many-cooks scenario that translates adroitly into the screenwriting process (the script is credited to Marianne Wibberley, Cormac Wibberley, Jay Scherick, and David Ronn), is a bit where Eddie Murphy "Cyranos" Owen Wilson to the tune of Marvin Gaye's "Sexual Healing." That out of a mercifully-brief 90-minute film the best moment comes courtesy a cheap gag involving an R&B classic and a flash of panty is, really, statement enough about the wisdom and ingenuity of the entire enterprise. Proof positive, if more proof is needed of the fecklessness of this shipwreck, is the fact that Wilson, easily the most gifted screenwriter on set, was not among the many asked to put pen to paper for I Spy.

Alex (Wilson) is a second-tier spy (sort of like the Spy Kids in Spy Kids 2, now that you mention it) in a super-secret spy organization. Equipped with second-rate equipment and fond of second-rate quips, Alex is sent to find an invisible airplane (shades of Wonder Woman, I realize wondrously) in really-cheap-to-film-there Budapest. Because there is to be a middleweight title fight in Hungary for whatever reason, middleweight champ Kelly Robinson (Murphy) is taken into the spy fold and used as the means to infiltrate the good graces of bad guy Gundar (Malcolm McDowell).

It goes without saying that Murphy's now-patented animated jackass performance is grating and racially unpleasant, but the question of the hour is how much Wilson's inward-looking wryness is a stereotype of "whiteness." Partnered now in a second franchise in which he plays the cultural majority straight man to a disagreeable racial caricature, Wilson scores now and again with his self-conscious mumbling just as Murphy occasionally elicits a chuckle with his jackhammer jibber jabber--but it occurs to me that both are mining the same well of racist stereotypes for character and humour. I Spy is facile and low, the sort of entertainment where no one is trying very hard because no one really has to: the built-in audience for this kind of garbage all but guarantees at least one sequel and the kind of box-office that sends the Dickensian message of "more, please."

I Spy has nothing to do with the late-'60s television series from which it takes its title--and everything to do with Rush Hour and Shanghai Noon. It's loud and by turns winking and self-congratulatory, one of those films that is immediately in the process of being forgotten even as it's being watched. Famke Janssen, who proved that she could act in stuff like Rounders and Monument Ave., reprises her Xenia Onatopp performance before becoming an eleventh-hour fatale in the middle of a series of double-crosses and twisty-turns that can only be described as "intensely stupid." Though it is the height of futility to rail against machines like the one I Spy is destined to become, all I can say is the reason we keep seeing the same movie with roughly the same people every year is because so many of us keep going and then, out of embarrassment or stupidity, not warning anyone. Break the chain. Originally published: November 1, 2002.