Harry Potter and the Chamber of Secrets (2002) 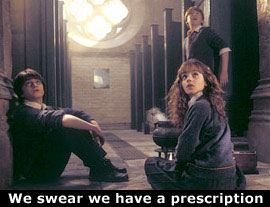 by Walter Chaw Harry Potter and the Chamber of Secrets (hereafter Harry Potter 2) treats its audience with respect while comporting itself with intelligence, wit, and passion. The things missing from the first film have been satisfactorily addressed in the second: the crucial racial bullying subplot; the unfortunate attention on special effects as spectacle; and the lamentable lack of character development. Perhaps most importantly, the sense of darkness and fear endemic to any great children's story has been honoured in the sequel. I completely expected to dislike Harry Potter 2 (as I disdain the films of Chris Columbus in general and Harry Potter and the Sorcerer's/Philosopher's Stone in particular), but the picture is more winningly indicative of screenwriter Steve Kloves's (The Fabulous Baker Boys, Flesh and Bone) dark character studies than of Columbus's childish desire for frothy restorations of a nuclear order.

The disturbing Harry Potter 2 boasts of a Holocaust subtext as rich and fertile as the Lodz Ghetto parable imbedded in George Miller's remarkable Babe: Pig in the City, and it features a betrayal by a Freudian dream symbol of a castrating mother (a giant spider) in an allegorical womb that is haunting in its uncompromising meanness. In the simplest terms, the picture--besides being overlong and burdened by a terrible performance from one of its three leads--is wonderful.

Harry (Daniel Radcliffe, getting too old for the role) is kept prisoner in his unctuous uncle's home until his friend Ron (Rupert Grint, frankly terrible) breaks him out with a flying car to spirit him away to the Hogwarts School, where, over the course of seven years, youngsters with magical ability study to become witches and warlocks. Their brilliant, bookish friend Hermione (Emma Watson, excellent) is revealed to be born of "muggle" ("non-magical") parents, leading to her persecution by an Aryan creep Draco (Tom Felton) and his terrifying father Lucius (Jason Isaacs), who are bent on cleansing Hogwarts of "mudbloods." Meanwhile, Harry falls under suspicion for the mysterious petrifactions of several students because of his knowledge of serpent's tongue, and an enslaved and abused house elf named Dobby (voiced by Toby Jones) tries in vain to warn our hero and perhaps secure his own emancipation.

Seen in one way, Harry Potter 2 is an adept fairy tale of transgression, with a hero forced to face his legacy in a situation that finds him as both its "wrong man" accused and only saviour. It's telling that the pivotal solution in a film laden with conflicts involves a symbol for reinvention (the phoenix) and the physical manifestation of Harry's self-knowledge (a choosing hat) vomiting up an Excalibur-surrogate as the instrument of negation for a chthonic serpent loose in the provocatively titled "chamber of secrets." The moral of the story is that Harry's confidence in himself is ultimately the key to exorcising the bogeys of his hazy past and troubled subconscious--Harry Potter 2's message is timeworn, yet its execution is fresh and exhilarating.

Seen in another way, the picture is a fantasy that's bracing in its energy and invention. A Quidditch match (a sport played on broomsticks in the air above a verdant pitch) is executed with CGI flair and a fair degree of menace (so far superior to the previous film's match that it hardly bears comparison); a chase through a dark wood is handled with verve and heat; and a quieter series of events in an abandoned girl's bathroom smartly mixes the creepy with the pathetic. Kenneth Branagh is fantastic as a pin-up blowhard, Isaacs wonderfully fascist as a deceptively complicated man of privilege, and as dour Professor Snape, Alan Rickman is pure delight.

Harry Potter 2 is a picture that allows its narrative to dictate its special effects and juggles an extraordinary multiplicity of grave subplots with grace and humility. Best of all, its makers understand that in a magical alternate universe, the sight of an animate tree or a moving painting is as mundane as a daisy or a toaster. That the film is a worthy swan song for Richard Harris, a man of a storied career, is first a surprise, then an incalculable relief--and destined to be the proudest legacy of Harry Potter and the Chamber of Secrets, a beautifully-crafted dark fable.