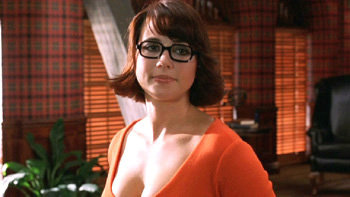 by Walter Chaw At one point in Raja Gosnell's Scooby-Doo, Shaggy (Matthew Lillard) tells the titular pooch, "We're like two trippin' peas in a freaky pod, man"--and the counter-cultural freak flag just keeps on flyin' in a live-action film more for the late-twentysomethings who grew up with the subversive Hanna-Barbera-Iwao Takamato cartoon than the kids of today being weaned on the much tamer, direct-to-video "Scooby" fare. I love that the reviled Scrappy-Doo is given a much-deserved vilification ("Puppy power! He's not even a puppy--he's got some kind of glandular thing"), that there's a scene in which Shag and Scoob are unseen in the Mystery Machine--while smoke billows out of its sunroof to a reggae refrain Shaggy can be heard rapturously intoning, "So toasted, soooo toasted," and that when Shaggy gets a girlfriend (the smokin' Isla Fisher), her name is Mary Jane ("That's, like, my favourite name!"). I love that Velma gets slyly "outed" ("I'm going on a journey of self discovery"), and I love that one of the main villains is a Telemundo wrestler.

What I don't care for is the rest of it. The film follows the same basic structure as the cartoon. The "gang" (burnout Shaggy and his drug hallucination Great Dane Scooby, pretty boy Fred (the unbearably bad Freddie Prinze Jr., who is at least consistent), damsel in distress Daphne (Sarah Michelle Gellar), and brainiac Velma (Linda Cardellini)) are asked to solve a mystery in a spooky locale that inevitably ends with the discovery that the evil creature is a guy in a monster suit. Scooby-Doo's prologue plays with the animated series' formula, with Daphne abducted, Fred flummoxing, Velma's plan foiled, and Shaggy and Scooby accidentally saving the day by virtue of their cowardice. As tired of the conceit as the rest of us, apparently, the gang splits up, and two years pass before mysterious Mondavarious (perhaps a play on Montovani, the king of "light orchestra") invites the kids to island theme park "Spooky Island" to solve a hazily-defined mystery involving the zombification of his spring-break revellers.

Redundant, I know. Scooby-Doo's central mystery plot is unnecessarily weighed down by mumbo-jumbo that introduces actual monsters (where evil janitors in suits would have sufficed), a strange and occasionally terrifying "body snatchers" theme, and some genuinely bad computer-generated animation. (Irritatingly, the actors appear to have a hard time looking in the right place, finding themselves more often than not peering over Scooby's shoulder or somewhere around his collar.) Prinze Jr. and Gellar, in a display of couple's unity, are equally flat and horrendous (though Prinze has a nice moment when he wants to get "talked down" from spiked root beer and Gellar pleases her "Buffy" fans by breaking out the kung fu), while Cardellini seems focused on impersonation instead of interpretation.

The star of the show, as evidenced by audience reaction and the fact that the film's promotion is hinged on him, is Lillard (who has now upstaged Prinze in at least four films), whose Casey Kasem burner act is dead on and strangely human. His timing is perfect, and an indescribable moment where he switches bodies with Gellar and moans, "Aw, Daph, what's wrong with you? Don't you ever eat?" is the highlight of the film. Sadly, he's asked to engage in a flatulence contest with an invisible dog, making one wonder how that would've flown in Harvey.

With attractively cartoonish set designs and enough eyebrow-raising material to please that segment of the audience perversely delighted by the subversive corruption of other people's children, Scooby-Doo counts as a minor surprise. It doesn't take itself very seriously, and while Chris Columbus apprentice Gosnell doesn't suggest that he's capable of pacing a film, especially during an overlong, overloaded conclusion, Scooby-Doo has a script (by James Gunn) several times more interesting than I would have expected. Paraphrasing another sprung children's tale, I don't think the film means what you think it means, and that sneakiness forgives a great deal of its slapstick banality and overall sloppiness. Maladies unavoidable in big-budget summer fare; be thankful that at the least Scooby-Doo demonstrates a little bread to go along with its circus. Originally published: June 15, 2002.

THE DVD
by Bill Chambers Though I have no regrets about waiting for DVD to see it, Scooby-Doo did not get my blood pressure up, and as someone who always resented the inception of Scrappy-Doo, I got a kick out of the revile for the character demonstrated by the filmmakers. I also appreciated of the experience of watching Scooby-Doo on home video the opportunity to study the CGI-laden picture's most glorious special effect frame-by-frame. (Velma.)

Warner presents Scooby-Doo on DVD in a 1.78:1 letterboxed transfer enhanced for 16x9 displays. (Fullscreen version sold separately.) Both sound and image--an alternately gritty/clean affair--are a mild disappointment, given Scooby-Doo's big-budget, tentpole origins; bass is reserved for a series of arbitrary pop songs while a sequence featuring flying souls scares up almost nothing in the surrounds despite ample motive. I'm not blaming the mastering of the Dolby Digital 5.1 audio so much as the perpetrators of this unimaginative mix.

Faring better are the supplements, with the exception of two mostly dead-air yak-tracks. In the first, the comments of director Raja Gosnell are interspersed with those of producers Richard Suckle and Charles Roven, who each provide some interesting background on the project, just too little of it. Stars Lillard, Prinze, Gellar, and Cardellini reunite for a second commentary but seem distracted by the film at hand. Elsewhere on the disc is the surprisingly informative promo piece "Scooby-Doo: Unmasking the Mystery", the majority of its twenty-two minutes devoted to the CGI trickery. Included within are a number of unaltered shots in which cast members interact with either a dwarf dressed as a dog, men in disconcerting green masks, or, in the case of Lillard's boxing match with Scoob, thin air.

Three featurettes play like outtakes from the abovementioned making-of. In "Scary Places" (4 mins.), production designer Bill Boes walks us through a handful of the film's twenty-five sets. Boes returns for "The Mystery Van" (1 mins.), showing us a number of re-imaginings of The Mystery Machine they had in mind before thankfully taking an if-it-ain't-broke-don't-fix-it attitude. The final piece, "Daphne Fight Scene" (2 mins.), shows Gellar practicing her wire-fu--note that her stand-in more closely resembles the Daphne of the TV show.

Gosnell's optional commentary for seven Deleted Scenes proves that the test audience had final cut on Scooby-Doo; the result of this democracy was the deletion of Velma dancing in a bikini with other scantily-clad young women (#5, "Locker Room"), which I think deserves a zoinks. (Alas, the rumoured kiss between Velma and Daphne remains AWOL.) Outkast's video for "The Land of a Million Drums," a two-player "Spooky Island Arcade Challenge" (actually a multiple-choice trivia quiz), and ROM-exclusive links and games aimed at the juvie crowd (nine in all) round out this adequate DVD release. Originally published: October 5, 2002.