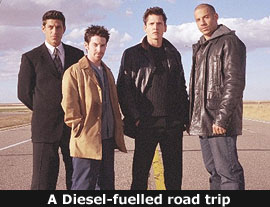 by Walter Chaw Counting on one's desire to see a legendarily hammy actor--a pair of them in fact--unleashed without fetters onto the unsuspecting world with nary a warning, Knockaround Guys is a surprisingly likeable kitsch artifact that astounds for its casual pretension and dangerous level of cheese. The film has John Malkovich trying unsuccessfully to channel his Valmont through a Brooklyn-made Guido and Dennis Hopper still out of control in a role intended, I think, to be bookish. Gathering dust on the shelf for a year or so now, the picture is finding a release in the early-fall doldrums one presumes for the meteoric rise of Vin Diesel, but stealing the show, as he so often does, is veteran character actor Tom Noonan as a laconic, nowhere Montana sheriff.

The delight of the piece, however, is how good it feels in between its deadly narrative passages (and make no mistake that a lot of this film is just awful) and how much fun it can be to see a/an actor/s without shame proceed to be shameless. As a 12-year-old in a difficult-to-watch opening sequence, Matty (Barry Pepper), the son of infamous mob under-boss Benny "Chains" (Hopper), demonstrates that he's too soft for "the life." Years of disappointment and failure later, Matty hopes for a chance to prove himself to both dad Benny and oily uncle Teddy (Malkovich); the chance comes in the form of an out-of-state cash pick-up undertaken by Matty's ex-druggie pal Marbles (Seth Green), which, predictably, goes awry somewhere in the middle of Montana. Along for the ride are lothario Scarpa (Andrew Davoli) and monologue-happy enforcer Taylor (Diesel), all taking on the hick sheriff (Noonan) in what amounts to a minor reversal of John Irvin's schlock-classic Next of Kin.

With Oedipal complexities handled with the same amount of care as a showdown in a rusted-out meat rendering factory, Knockaround Guys--brought to us by the same screenwriting team (making their joint directorial debut) responsible for the similarly interesting and similarly artificial Rounders--tends to hamstring itself with overlong dialogue sequences. The look and pace of the piece--provided by Keith Gordon's regular cinematographer Tom Richmond, production designer Lester Cohen (Forces of Nature), and editor David Moritz, a two-time Wes Anderson collaborator--throb with a lonesome forced-realism, muted and dusty.

Knockaround Guys demonstrates what it could be when Noonan struts on-screen with his careful reptilian gait and a picture that betrays what it might have been (while entertaining in a high-fromage sort of way) when Hopper and Malkovich do their peculiar things. The real failures of the film are, in other words, its uncontrolled glee with its veteran cast; too much faith in its freshman players (Diesel, a fine physical presence, can't deliver a line and almost single-handedly sinks the film during one barroom oration); and not enough time spent in the company of Noonan. Originally published: October 11, 2002.