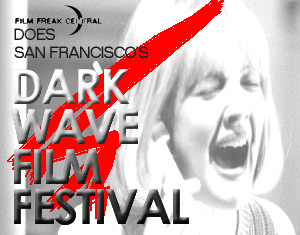 by Walter Chaw The question, and it's a question with currency, is why anyone in their right mind would subject themselves (and their long-suffering editors) to coverage of two concurrent film festivals. A pair of answers: the obvious is that I'm not in my right mind, but as obvious is the fact that San Francisco's Dark Wave, which ran from October 18-20, is one of the most exciting "small" film festivals in the United States. I wouldn't pass up the opportunity to talk about it, in other words--ulcers be damned. Presented by the hale San Francisco Film Society evenings and midnights at the historic Roxie, last year's presentation included one of this year's best films (Larry Fessenden's superb Wendigo) as well as the finest example of retro euro-horror (Lionel Delplanque's Deep in the Woods) since Dario Argento lost his marbles.

The devaluing of scare cinema since long about just after John Carpenter's The Thing is a product of a kind of generalized snarkiness born of raised eyebrows, self-referential post-modernism, and a brutal disrespect for audience and tradition. Between Dark Wave and New York City's exciting Scary Movies: 30 Years of Horror at The Walter Reade Theater in Lincoln Center, the resurgence of the horror movie as a pithy throughline to the Jungian shadow of cultural zeitgeist takes on a kind of scholarly lustre that is thrilling, warranted, and overdue in the modern era.

What Dark Wave presents are films (mostly foreign, note) that push the boundaries of what is possible within the genre. FILM FREAK CENTRAL is proud to present our coverage of this young and vital festival. Consider it dedication to a kind of picture and ethos in filmmaking that is not only passionate, but our passion. In a very real way, Dark Wave represents the reason that we at FILM FREAK CENTRAL do what we do.

British soldiers find themselves on a training operation in the Scottish Highlands, where they happen upon a special-operations jerk who's the sole survivor of some kind of attack that's left a crew of highly-drilled commandos a red smear in a clearing. The victims of werewolves, it seems, the squad retreats to an abandoned farmhouse (more than shades of Night of the Living Dead), waiting for the sun to rise. The film is exuberantly gory (an eviscerated sergeant objects that his spilled guts won't fit back in his body cavity as a chum tries to shove them back in) and self-aware of its place in the genre in a Howling sort of way; the only real weakness is its casual disinterest in werewolf lore. The night in question takes place during a full moon, but questions of silver are parsed (until the finale) in a way that makes one wonder about the effectiveness of shooting thousands of rounds at the beasties. Said lack of reverence makes Dog Soldiers less a werewolf movie than a really well-done genre knock-off and indie action flick. Shot on what must have been a zero budget, the film's monsters have the wonderful look and presence of Stan Winston's old school, non-CGI model and karo syrup creations. They look like guys in werewolf suits--and it's wonderful. That Neil Marshall's hyphenate debut is essentially an exceptionally well-written, well-edited, well-directed, well-acted, bald-faced rip-off of Aliens--its plot developments, conflicts, and characterizations identical to those of James Cameron's sci-fi action classic--is a matter of course, yet there's something to be said for energy and craft in any endeavour no matter how derivative. Besides, it's worth it for a hilarious end-credits sequence that answers a question asked during the film and clarifies exactly how seriously Marshall, et al have taken the entire exercise.

Dripping with style and a seedy noir sensibility, Juan Carlos Fresnadillo's feature-length debut Intacto is an extraordinarily good-looking film that doesn't quite have the goods to justify its 108-minute running time. Playing like the poetic dark fantasy of Dan Simmons's forlorn, guilt-ridden fiction, the picture follows the fortunes, literally, of several archons of chance who deal in luck as a commodity. A scene in which the lucky are winnowed from the luckless in a mad dash blindfolded through the woods is one of the most startlingly original moments in modern thriller cinema--as hilarious as it is unsettling, it's a sequence so right that one wonders why nobody thought of it before. Max Von Sydow plays master gambler Samuel, capable of stealing good fortune by touch and tortured as the sole survivor of his concentration camp. (Samuel's character recalls Dan Simmons again in general and his novel Carrion Comfort in particular.) The interplay of guilt and exhilaration in Sydow's character describes the euphoria of gambling in terms both elegant and succinct. The problems with Intacto begin with a storyline too conventional for the brilliance of its premise. Apprentice Federico (Eusebio Poncela) offends master Samuel and has his luck stolen; seven years later, with an apprentice named Tomas (Leonardo Sbaraglia), the sole survivor of a plane crash, Federico hopes to avenge himself against his former master. Though it's overly familiar in its basic narrative, there are enough moments of beauty and ferocity to push Intacto from intriguing failure to marginal success. At the very least, it's an extremely promising debut for Fresnadillo.

A minor updating of Cat People that sort of reminds of Abel Ferrara's oddly neutered Body Snatchers in both degree (both are third hacks at a source) and relative success. Falling far short of Jacques Tournier's marvellous version and even Paul Schrader's take, which is redolent with carnality, Danish director Martin Schmidt's Kat is visually interesting and occasionally frightening but also victim to too much familiarity. Lovely Maria (Liv Corfixen, a fleshier Bridgette Wilson) is having a nice glass of herbal tea (not really, but I'm painting a picture here) with her good girlfriend Isabella (Charlotte Munck) when Isabella's nutty grandparents drink chicken blood, hold hands, and accidentally summon a cat demon that possesses Maria's beloved kitty. The idea of an evil cat being redundant, perhaps, Maria is cursed by the ability to see through the were-cat's eyes (the appearance of the creature is something of a cross between Stan Winston's creature in An American Werewolf in London and the CGI construct from Brotherhood of the Wolf, on a miniscule budget), an ability that causes her to feel pretty badly about things--not aided at all by her trouble with her idiot boyfriend. The sexual subtext of this classic story of the id is handled pretty poorly--subtext that's so textual tends towards the leaden and the pretentious. Although a few late gore images and a nicely handled point-of-view murder of a terrified couple satisfies, Kat is ultimately a modest film on a modest budget that neither fails spectacularly nor aspires to greatness--a monster movie without much bite.

An uncommonly beautiful and thoughtful horror film marred now and again by laggard pacing, Masato Harada's painterly Inugami is a version of the Oedipus myth retold through a Cat People prism--that is, an essentially masculine journey filtered through a fear of feminine sexuality. From an involuntary hysterectomy to an infant emerging from the paper glue basin to a grandmother withered by the fire of young desire, the picture is an insidious parade of subtle fertility horrors. It's a statement about the immutability of tradition and the paradoxical inevitability of change; its central character a woman Miki (an amazing Yuki Amami) who may very well be 1,060. We're introduced to Miki, a member of the secretive Bonomiya Clan sequestered away on rustic Shikoku Island, as she makes paper by hand over a basin filled with resin and starch. The slow craft of making paper will be the central metaphor of the film: a meticulous discipline destined to be marred by the hand of another. A sudden gust of wind announces the arrival of young Akira (Atsuro Watabe) amidst the Bonomiya and with him a sexual sea change within spinster Miki who, as her infatuation with young Akira deepens into lust, begins to manifest her arousal with an increasingly youthful appearance and occasional flashes of possibly supernatural fury. The connections with the Western succubus mythology more plentiful than the film's titular assignation of evil dog spirits ("inugami") awakened by the inattention of the Bonomiya women, Inugami is trance-like and disturbing to the core.

It's a little Frank Henenlotter, a little Takashi Miike, and a little Ingmar Bergman (with a dash of Ms. 45 for the attack-feminists and a shot of RoboCop for the Verhoeven apologists), but what Nam Gee-Wong's Teenage Hooker Became a Killing Machine in Daehakroh (hereafter Teenage Hooker) seems to be the most is a terrifying satirical gloss on some of the thornier social maladies that afflict South Korea. The transformation of a pregnant high-school prostitute into a cyborg death-bot at the hands of deranged teacher/preacher is composed almost entirely of maniacal giggling and lurid DV zoom shots; Teenage Hooker is easy to dismiss as amateurish until a couple of hours after its viewing, when the exploitive quality of its images (including a vivisection, the aftermath of which reminds a great deal of the legendary Japanese faux-snuff flick Guinea Pig: Flower of Flesh and Blood (and the film's zero-budget look owes a great deal to the Guinea Pig series)) stick in the viscera like a bit of indigestible grue. Extremely short at one hour, Teenage Hooker still runs long. Its only useful moment of magnification comes when the evil preacher/teacher does a dance to Nipponese juke rock. A perverse student film that plays like a compendium of admired gurus (John Woo, Robert Rodriguez, Ringo Lam, and Luc Besson join the unapologetically "honoured" by its conclusion), for as vital as Teenage Hooker feels now and again, in the end it's just a delirious ten-minute short padded out to fill a sixty-minute frame.

Hideo Nakata's return to the horror genre after a brief sabbatical following the first of the Japanese "Ring" sequels (Ringu, Ringu 2), Dark Water (based, like Ringu, on a novel by Japanese horror master Kôji Suzuki) revisits the auteur's themes of single motherhood, children at periods of crisis, baptismal floods of menstrual wet, and personal technological invasions. The picture is rich with atmosphere and archetypal discomfort, a horror film rife with possibility and teeming with an angry, almost ugly, energy held just beneath its deceptively placid surface. Its portrait of the maternal instinct and responsibility reminds of the operatic "rightness" of the final scene of Rosemary's Baby, while its setting in a decaying tenement recalls elements of Kubrick's Overlook Hotel (the elevator-born deluge, in particular, is updated to terrifying effect). The primal implications of a single mom housed in a slum with a negligent landlord fighting for custody of her small child as a growing stain of wet drips down in a symbolic tattoo develop with an inexorable patience that infects and terrifies. The strength of Nakata's pictures is his essential romanticism, his nostalgic belief in the sanctity of parental responsibility placed at odds to the animal logic of procreation. Dark Water presents the trauma of childhood as a dark fairytale and, in truth, the uses of enchantment are such that childhood in most respects is every bit the dark fairytale. The picture is melancholy remembrance and its sources of fear are intimate and brilliant.