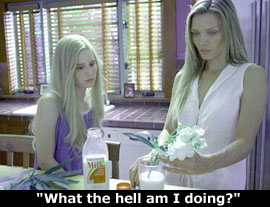 by Walter Chaw Anchored by an already-lauded (and justifiably so) performance from semi-newcomer Alison Lohman, veteran television director Peter Kosminsky's White Oleander manufactures a trio of unlikely neo-feminist empowerment workshops, loosely tying them together with an orphanage/prison trope and a ridiculous framing motif of sad dioramas in a row of suitcases. White oleander is a poisonous flower (we learn in one of many unforgivably scripted moments of wispy narration), and the film of that same name is a broad, melodramatic estrogen opera that's pretty toxic in its own right.

Michelle Pfeiffer is murderous artist Ingrid, the poisonous bloom of the title: beautiful and deadly, of course; the metaphor is better suited for a Raymond Chandler pot-boiler, though her purpose as femme fatale in the picture is the same. The hardboiled detective of this Judy Blume (or V.C. Andrews, perhaps?) noir is Ingrid's daughter, Astrid (Lohman), sent on an Oedipal quest for self-discovery by her mother's assassination of evil male Barry (a criminally wasted Billy Connolly, whose only line is "Aaaagh, y'bitch you"), who, by the end of the film, is exonerated and dismissed like the rest of the men as boys just being boys. It's a feckless slight that doesn't grate simply because the picture casts women in every bit as broad and culturally straitjacketed a light--it just happens to offer a selection of stereotypes for the ladies.

There's a quick mélange of faux-poignant images (artist Ingrid on the rooftop, feeling the wind--can you dig it?) before Astrid finds herself in the foster care of bible-thumping trailer hussy Starr (Robin Wright Penn) and her earthy carpenter husband, Ray (Cole Hauser), then pinched failed actress Claire (Renée Zellweger, bravely trotting out her own clip from Texas Chainsaw Massacre 4) and her globe-trotting husband Mark (Noah Wyle), and finally inexplicable Russian gypsy Rena (Sventlana Efremova), who operates a stall at the flea market and dispenses nuggets of Cyrillic-accented Oprah-wisdom. In between, Astrid does time in a minimum-security orphanage (where she falls in love with the eternally grinning Chauncey-Gardner-esque simpleton Patrick Fugit) and visits her evil, Hannibal Lecter-esque mother in prison, where her only pals are women's studies majors and defense lawyers.

Its message one of self-actualization, White Oleander uses a giant crayon to sketch out each of the speed bumps on that pot-holed narrative highway. Starr and Ray allow Astrid to explore her class prejudices (as they pertain to education), religious curiosity, and Elektra complexities before being shot; Claire and Mark allow Astrid to explore her class prejudices (as they pertain to art appreciation) and her growing resentment of her manipulative mom fatale before rolling over on a corpse; and Rena allows Astrid to become as egotistical and wheedling as Ingrid before...before nothing, I don't know what happens to Rena. For as much as White Oleander preaches a message of choosing one's own path, it seems uncomfortably dedicated to providing for Astrid a string of one-dimensional types to carve out Astrid's path for her. After all, even her final emancipation is one carefully orchestrated by her puppet-master mama.

Poisonous flowers in milk split time with the Leonid meteor shower (representing the souring of mother's succour and the dashing of childhood dreaming in the simplest terms possible), while a short epilogue sums everything up in so tidy and literal a package that it devalues the two long hours that came before. Rena's fate aside, nothing is subtle or unclear about White Oleander. Decisions aren't made so much as sermons on mounts engaged in and endured, each fastidiously overwritten line drop-kicked from a gilded pulpit. White Oleander is a medieval morality play recast with a Darwin chart of the modern damaged woman (Springer veteran to broken diva to childless entrepreneur to martyred Steinem feminist)--and at the centre stands Lohman, sweet and unaffected, in search of a movie worthy of her performance.