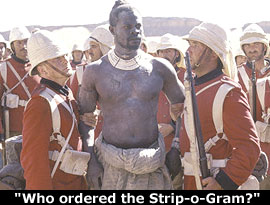 by Walter Chaw An old-fashioned epic of the type only Bombay attempts anymore, The Four Feathers (directed by a Bollywood ex-pat, natch: Shekhar Kapur)--the fifth film version of A.E.W. Mason's turn-of-the-century, Count of Monte Cristo-flavoured tale of valour, redemption, and derring-do--is indicated by a feather-lightness at its heart that undermines the sweeping, operatic pretensions of the piece. The picture just doesn't possess the kind of gravity that would hold together its broad strokes and gaping panoramas; all that remains is youngsters playing at dress-up, Kate Hudson cycling through both of her expressions, and one war set-piece that is very simply breathtaking while succumbing to nearly every "arrogant officer folds, religious soldier freaks, valiant soldier tragically wounded" cliché in the travel-worn war-movie book.

Harry Faversham (Heath Ledger) is a member of the British Army who resigns his commission on the eve of being shipped out to suppress an uprising in colonial Sudan. Angering his mates and doll-eyed fiancé Ethne (Hudson), Harry receives four white feathers (probably chicken feathers), one from each of his friends and his girl, symbolically branding our dashing hero with a fowl artifact of cowardice. Inspired (we have to guess) by his cultural shunning, Harry stows away to the Sudan, hires a camel caravan led by a French Legionnaire (his first mistake) to take him to his disloyal chums, and, disguised as a native Sudanese (uh huh), contrives to prove his courage and return the four feathers. The increasingly-unlikable Wes Bentley clenches his jaw as Jack, Harry's one friend to resist bestowing the badge of dishonour but also obviously evil from the start with designs on the wilting Ethne. Stealing the film, however, is the striking Djimon Hounsou as Abou, Harry's man Friday, who washes out by the end as the sole heroic figure in the entire mess.

The insult is presented so obliquely and the romance played out in such a trifling way that The Four Feathers is, more than anything else, confusing and rootless. Harry appears to be suicidally impulsive and ill-considered, relying time and again on Abou to risk his own life to pull Harry's fat out of the fire; Ethne seems so mercurial and simpering that her desirability is always in question. The picture is compacted and truncated in such a way that the passage of time is hazy, the relationships between the major players is tenuous and built on stereotype, and the dialogue is the sort of stuff that plays like the awkward rip-off of The Man Who Would Be King that it is. Kapur's gift for costume drama epics, displayed most recently in Elizabeth, suffers here for the lack of a Cate Blanchett anchoring the soap melodrama.

The absence of a solid centre becomes more obvious as The Four Feathers flies apart even as its visuals (including an amazing prison tableau that looks like something out of Hieronymous Bosch) threaten to make the plot pointless anyway. As passionless and slipshod as almost any other big-budget spectacle this summer, The Four Feathers seeks to substitute the grand image for any real substance, and though its surfaces are indeed impressive from costume to location, without a compelling motive for any of its characters or any real human connection to all the dust sturm und drang, all that remains is an attractively-staged camel opera that's unintentionally funny and imminently forgettable. Originally published: September 20, 2002.