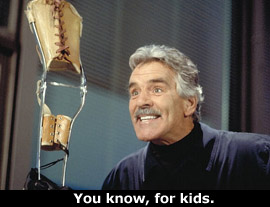 by Walter Chaw A virtual clone of Jake Kasdan's Orange County, Bruce McCulloch's Stealing Harvard takes the same premise (low-aspiring kids get a chance at a prestigious school), the same quirky sensibility, and the same characters (Jason Lee fills in for Colin Hanks, Tom Green for Jack Black, and Leslie Mann (who is also in Orange County) for Schuyler Fisk), and does considerably less with them. Taken as bookends to 2002 up to the awards season or as a peculiarly precise comparison of how minor differences in screenplay, director, and cast can subtly push a somewhat dreary premise into a vaguely good film or a vaguely bad one, Stealing Harvard at its heart remains a picture that never finds a way to balance the laconic style of Lee with the erratic jitter of Green. Its inability to find any sort of cohesiveness (the same malady afflicting Albert Brooks's and Brendan Fraser's The Scout) dooms Stealing Harvard to long stretches of irritating torpor punctuated by the occasional line delivery that reminds, mainly, that Megan Mullally (as a character straight out of Drop Dead Gorgeous) has impeccable comic timing.

Noreen (Tammy Blanchard, making her film debut) is the daughter of trailer-park hussy Patty (Mullally) and the niece of nice guy John (Lee), and against all odds, she's been accepted to Harvard. After Noreen calls in a promise made about a decade previous, John discovers that he's morally bound to pay the balance of Noreen's tuition, which just happens to be the amount of the nest egg he and his fiancé Elaine (Mann) have squirrelled away as a down-payment for their starter home. Afraid to ask Elaine for the money, John enlists his clearly unbalanced friend Duff (Green) to come up with a few larcenous schemes to produce the cash.

Stealing Harvard is less a narrative than a vignette comedy featuring Green doing his familiar song-and-dance of putting disgusting things in his mouth and falling down with Lee doing his familiar thing of being too smart for the movie in which he finds himself. Besides the two comedians not jibing, the picture itself appears to be three separate storylines that have nothing to do with one another: the central story of John and Duff botching burglaries and robberies; a domestic triangle intrigue involving John and Elaine and Elaine's father (Dennis Farina); and a trailer park mixer with Patty and Noreen. Its familiarity resting uneasily with its discordant structure, Stealing Harvard's greatest crime is its overreliance on a recurring bit of business involving cross-dressing that yields minimal comedic gains (while being surprisingly integral to the resolution), and a couple of tantalizingly disturbing subplots about Elektra complexes and the serendipitous interdiction of destiny at a horse race left to lie fallow.

Ultimately, like Orange County before it, Stealing Harvard is indicated by that glow of potential peaking around the corners of the actual product sprawled on screen. Green suggests an interesting presence should he ever find a director capable of channelling his idiosyncrasies into an actual performance, while the idea that higher education is a prize to be won at any criminal cost is deliciously subversive. The Paper Chase by any means is a definite step forward from the celebration of puerility and idiocy in the American Pie teen genre; a shame that Stealing Harvard is too busy getting in its own way to be anything but frustrating, boring, and forgettable. Originally published: September 13, 2002.