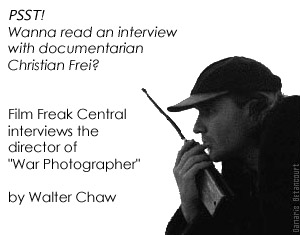 September 30, 2002|While flipping through a magazine on a flight to Chicago in April 1997, Swiss director Christian Frei became acquainted with the work of photojournalist James Nachtwey, one of the most decorated artists in his field and the subject of Frei's remarkable documentary War Photographer, which debuts this week in Denver at the Argus Human Rights Festival. A fascinating, almost Lacanian separation of observer and observed indicates the piece, a film shot with a specially designed camera-mounted camera that provides an intimate point of view of the photographer at work. I had the pleasure of speaking with Mr. Frei this morning on the telephone to Switzerland as the director, fresh from a trip to Kabul researching his newest project, The Giant Buddhas, spends the next week and a half in his homeland.

FILM FREAK CENTRAL: What precipitated your interest in the documentary film medium and format?
CHRISTIAN FREI: Seventeen years ago I went to a teaching school. On the way to it I'd pass the walls of a monastery and every day I'd wonder what was going on behind those walls. So when I had the opportunity to take a super8 film class and we were given the option to choose a documentary film topic, I said immediately that I wanted to document life behind those monastery walls and I was intoxicated by this medium. With a camera I could enter into a hidden a world--a world which for me would not have been otherwise accessible, and I was fascinated by the pure documentary approach: how do these people live, how do they deal with sexuality, what were the conflicts in the monastery. It was a cute little 40-minute film that got some distribution on Swiss TV, and enjoyed a pretty good level of success for that sort of thing.

Was being nominated for the Oscar for War Photographer helpful to your career?
Well, yes and no. I'm proud of our Swiss film system of subsidies but as you have to apply for those subsidies anyhow, an Oscar nomination doesn't really help. When I started my Afghanistan project, however, it definitely opened a lot of doors for me--I felt very appreciated there and folks were excited to have me make a documentary there.

Why did you create the Swiss Effects micro-camera?
You can't do a documentary about a photojournalist by surrounding him with a normal camera and sound crew. You'd interfere with his work, you'd destroy it really, enough so that the moment that we perfected the technology was the same moment that Nachtwey agreed to do the piece. James told me, "Listen, this has to be done in an unobtrusive, professional way--it can't interfere with what I do by even one percent," and I knew that if we couldn't honour that he'd just give us back our agreement and bid us good day. He's just too dedicated to his profession. So that was the challenge I placed before [tech company] Swiss Effects. Micro-cams are pretty widely available now, but we needed something that was rugged and almost completely automated--just an "on/off" switch and we're ready to go. We'd travel around and he'd see something and be ready to go almost immediately so it was understood that we wouldn't interfere with his need for flexibility and spontaneity.

So he had some sort of remote--or you did?
It was all controlled by a computerized remote in his backpack and it was built to run for twelve straight hours: both mini-DV cams were totally remote and "war proof" in a sense. James really put them to the test, too, lots of running and hiding. Again, if it didn't work he would've very politely said, "Thank you, Christian, but it's just not working." Thankfully, it never came to that.

There is some additional footage in the field, however--what kind of crew did you have?
My photographer Peter Indergand used a Beta Digicam and I'd trail along about fifty feet behind, keeping track of the six audio tracks, the two mini-DVs, the battery levels, and so on, just making sure that everything was going smoothly. It was essentially just a two-man crew. War Photographer really wouldn't have been possible without the new digital technologies.

Was there a learning arc for the new technology for Nachtwey?
I tell you, I remember the first day James was shooting with the micro-cam in Indonesia and we looked at the tape and he was very disappointed. I mean, still cameras, of course you don't hold them out like a video camera as you're approaching people so the footage was the shaky mess, it wasn't even usable as avant garde--he didn't like it, so he did learn to hold out the camera a little bit. But as soon as he started taking pictures he forgot all about the video camera--as soon as he gets his subjects he's totally absorbed.

One of the issues raised in the film was the policy of non-involvement--how do you stand on that?
This is one of the deepest problems of that profession. I never had to make that choice in making War Photographer, luckily, filming in Ramallah for instance and capturing the ritual of throwing stones--or in Kosovo right after the war. Injury was so common in those places that there were always emergency crews around so we were never presented with the quandary of should we help, should we just document. Ironically, in doing my new film in Afghanistan this last week I was interviewing people living in these atrocious conditions in caves near the Taliban-destroyed stone Buddhas. When I told them I was leaving but that I'd be back in April to finish the movie, they cried that they wouldn't survive the winter. For me, the film was forgotten at that moment--I saw one child, a two-year-old baby suffering from severe malnutrition and my decision was made. We bought supplies for them, we tried to help.

Your new film is about the Taliban and the destroyed stone Buddhas?
No. That's certainly an entry point, but the story goes beyond that incident into the general destruction of cultural heritage in Afghanistan. The working title, though, is indeed "The Giant Buddhas".

Have you learned any documentary techniques from Nachtwey?
Two things--maybe they're even the same thing--I don't know if it's the correct term, but Nachtwey uses a "low key" method. Just with body language he'd manage to convey dignity and respect. In the example of the family that lived between the railroad tracks, Nachtwey wouldn't say a word to them, he'd shake hands with the patriarch and show his respects and then he'd turn away so that the children didn't feel as though they needed to bond with him. This strange "uncle," you know what I mean--they wouldn't try to play with him or be curious about him, and it seems brutal but it has to be this way and it has a lot to do with this ability to become invisible. It's more complicated than it seems and though I already employed many of those techniques as a filmmaker, I learned a great deal about not just how to improve it, but just how vital it is to the truth.