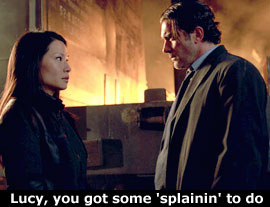 by Walter Chaw Walking away with the title of Most Incomprehensible Film of 2002 (walking away is also, incidentally, what you should do when presented with the prospect of seeing this film), Wych Kaosayananda's ponderously branded Ballistic: Ecks Vs. Sever is a collection of puzzling explosions married to a series of alternately stunning and hilarious line deliveries of, to be fair, unspeakable exposition. It hopes to obscure its awfulness with its volume or, failing that, to dress up its stupidity with backlit shots of a woman communing with a captive manatee.

Characters change sides and names with no warning or reason while the mystery of why a bunch of American law enforcement entities are running amok in Vancouver, BC is never once addressed. (Canadians wondering if Yanks have become less arrogant in their perceived status of feudal lord over the Great White North need wonder no longer--as far as Ballistic: Ecks Vs. Sever is concerned, the "Dukes of Hazzard" county line is up somewhere around the arctic circle.) Ultimately, after having given up on the plot halfway through, the only real questions I was left with were how Antonio Banderas's and Talisa Soto's characters had an Amer-Asian child and how Lucy Liu's character could be a good guy after slaughtering half an innocent constabulary.

Agent Ecks (Banderas) is one of those wounded action heroes who lost his wife to a car bomb and Agent Sever (Liu) is one of those emotionless, remorseless automatons played by Chinese people. Agent Sever kidnaps the Amer-Asian kid of Caucasian Zane or Clarke (Roger R. Cross) and Puerto Rican Vinn or Rayne (Soto), inciting Zane (or Clarke) to send his henchman Darth Maul or Ross (Ray Park) in pursuit. Turns out that Sever is mad at Zane for killing her family, just like Ecks is mad at Clarke for killing his family, and then, whaddayaknow, it turns out they're actually looking for the same guy ("looking for" not exactly the right term), and then it seems that Ecks's family isn't dead after all (though Sever's is still dead, I think) and the kid (who remains Amer-Asian, it seems, no matter the ethnicity of his parents in the film) has been impregnated with some kind of microscopic robot assassin, except that he's not and then someone else is and then... Truth is, I have no idea what this picture is about, even though I was paying attention for at least a quarter of its running time.

Judging by the size and duration of the plentiful explosions, everything in Vancouver is dangerously saturated with airplane fuel, and judging by how close to crossed Lucy Liu's eyes are, she must have wicked binocular vision. The wait for Ray Park to throw down and drop some kick-fu on the posing Liu is far too long (and anti-climactic besides), and the hordes of unmotivated, neo-Woo slow motion shots had most of a stunned screening audience in stitches for the majority of the last grotesquely protracted hour. (I've had shorter semesters than the last hour of this movie.) Don Davis's now-angel chorus/now-yesterday's trip-hop score squats in the middle of every scene like a nose pimple: painful, embarrassing, and socially awkward--better to pretend you don't notice. Meanwhile, Liu and Banderas engage in a gravid staring contest where the audience is the ultimate loser. Cataloguing the myriad offenses of this chaos (displaying his only moment of self-awareness, director Kaosayananda goes by the moniker "Kaos") is a task requiring of a constitution considerably hardier than mine. Originally published: September 20, 2002.