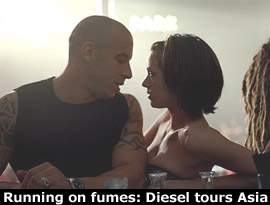 by Walter Chaw The first film of the summer to actually make my ears bleed, Rob Cohen's xXx is a lightshow wrapped around an idiot plot that may or may not become a franchise based entirely on how hungry audiences are for another poorly-made boom-boom fest and how susceptible they are to a marketing machine intent on repackaging a cheap updating of Condorman as "the next James Bond." Vin Diesel (apparently separated at birth from his sister, David Schwimmer) plays monosyllabic Neanderthal Xander "my friends call me 'X'" Cage, an extreme-sports political activist who steals conservative senators' cars and drives them off bridges with pal Tony Hawk. When a dapper tuxedoed NSA (don't ask) agent is assassinated at an industrial concert in Prague, lone wolf spymaster Gus Gibbons (Samuel L. Jackson, in Batman supervillain Two Face makeup) does a Dirty Dozen and recruits the shadowy agency's next superagent from a pool of dangerous criminals.

Attempting to list all of the film's screaming incomprehensibilities is madness, while the inclination to do so is rightly identified as a pastime reserved for people who came to the theatre with some expectation of coherence. xXx is a series of regularly spaced action sequences that, despite being incoherent (how does a motorcycle jump over a house without a ramp? Why jump out of an airplane to start an avalanche with grenades when grenades can be tossed out of the airplane? Etc.), at least have the decency to shake the fillings out of your teeth with an agreeable level of PG-13 irresponsibility. It's the kind of movie I can imagine a hormone-addled version of myself about fifteen years ago enjoying a great deal, remembering that--like most fourteen-year-olds--I was an emotionally-fragile virgin with self-esteem issues, violent fantasies, and an adolescent taste in film predicated on the quantity of tits, ass, and explosions on parade. All others need not apply. Originally published: August 9, 2002.