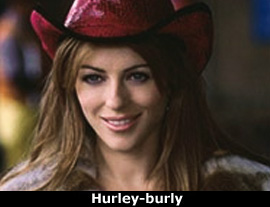 by Walter Chaw Reginald Hudlin's Serving Sara is a miserable, listless, pathetic excuse for a movie. It's already dreadful by the time Matthew Perry finds himself shoulder-deep in a bull's rectum, after which it defies a few natural laws by somehow getting worse. There are no laughs to be found in the whole of this lugubrious shipwreck--even the sight of Perry getting the tar beaten out of him by a pair of Italian caricatures is a sour, joyless affair. Seeing as being physically humiliated is Perry's sole silver-screen reason for being (see also: The Whole Nine Yards), that his getting kicked and punched is not ever at all amusing says a great deal about the relentless excrescence of this exercise. I would add that at least it's better than the amazingly awful Perry vehicle Almost Heroes, except that it's not.

Perry is Joe Tyler, a service processor who has a flustered, jive-talking black boss (Cedric the Entertainer) and an idiotic Italian intra-office archrival Tony (Vincent "Big Pussy" Pastore). Given the task of serving divorce papers to the titular Sara (Elizabeth Hurley), the smart-alecky Joe (imagine his "Chandler" character from "Friends" magnified, bitter, and without comic timing) is convinced to "flip the card" and serve Sara's husband (an utterly wasted Bruce Campbell) instead for the tidy sum of one million dollars. The reasoning for this tomfoolery has something to do with Draconian divorce laws in the state of Texas--and, indeed, Texas takes a great deal of flack in this film, along with fat kids, women, and various ethnicities. It's one thing to take on socially mandated concepts of correctness, it's another altogether to take badly-aimed cheap shots.

Wisely, people still hiring Hurley in speaking parts appear to have written into her contract that she must spend half the film or more dressed in a Catholic schoolgirl's outfit no matter how contrary to logic such a wardrobe might be to her character. Without this blessedly puerile distraction, I suspect that Hurley's indescribably horrific acting career would already be over. (When one is edited out of an Austin Powers movie for reasons of quality, one should take this as a message delivered in no uncertain terms.) The sad fact of the matter is that the lovely Ms. Hurley turns in a one-note, graceless performance--and outperforms everyone else in the cast. Perry is wholly disinterested and completely uninteresting, a nasty amalgam of tics and badly timed wisecracks wrapped in an ill-fitting leather jacket. That he and Hurley end up romantically linked in the film isn't so much preposterous and predictable as shrug-worthy; more troubling is Cedric the Entertainer's failure to elicit so much as a paternalistic grin with his incessant racial mugging.

Serving Sara joins The Master of Disguise and The Sweetest Thing in an unholy trinity of 2002 comedies that aim for the absolute lowest of the lowest common denominator. The picture, scored by a perversely cheerful Marcus Miller accordion/harmonica/banjo abomination, is a monument to bad in all its florid variety. Though much more can be said about the ways in which our entertainment machine fails us, sufficed to say that Serving Sara stinks as much as Chandler's arm. What a sad state of affairs when that actually means something. Originally published: August 23, 2002.