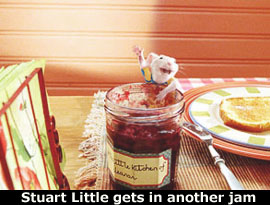 by Walter Chaw As boring as it is generally well-intentioned, Stuart Little 2 takes a page from the Hunchback of Notre Dame II playbook by presenting a wilting fatale with a heart of gold (Melanie Griffith voices a larcenous canary) adopted as an orphaned chick by an evil criminal mastermind (James Woods, speaking for a falcon) and infiltrating a kind family's good graces for the purposes of pilfering. The family in question, based loosely on that described in E.B. White's beloved Stuart Little, consists of a cheery mom (Geena Davis), a cheery dad (Hugh Laurie), an insipid kid with a giant head (Jonathan Lipnicki), and an adopted mouse named Stuart (voiced by Michael J. Fox), whom the Littles treat like one of their own. No wonder--Stuart can talk, wear clothes, walk upright, drive little toy cars and, in the standard sequel amplifications, fly a little toy airplane and fall in love with something outside his species.

Penned by Bruce Joel Rubin, the scribe perhaps best known for his infernal couplet of Ghost and Jacob's Ladder, infuses Stuart Little 2 with a fair degree of disturbing subtext. The young vermin and his ladylove watch Vertigo while pre-mating, predicting the picture's femme deception, preoccupation with heights, and oddly, religion (in a cut-away to a nun crossing herself for no good reason); Davis's June Cleaver bit takes on a hot degree of fey sexuality ("Little hey, little ho!"); and Nathan Lane-voiced family cat Snowbell's status as a second-class citizen robbed of voice and easily bribed by processed meat becomes more of a puzzlement in Stuart Little's increasingly anthropomorphized world.

Unfortunate carry-overs from the original include easy racial and scatological gags that get kids into the swing of casual prejudice and feckless joking early (mean, gibberish-spewing Chinese restaurateurs; Arab cab drivers; ruminations on the contents of falcon poop), and an essential failure to generate much in the way of excitement in its extended digitally-rendered set-pieces. The result of the mixing of darkness in Stuart Little 2 with a variety of brightly-lilt cartoonish hyper-reality amounts to far less than George Miller's dead brilliant Babe: Pig in the City (which addresses many of the same size-and-pride issues with far more intelligence), leaving the highest praise for Stuart Little 2 that it is most successful at being marginally better than the first film.

The picture's main appeal is that it will raise a few questions that parents will have to cagily dodge, interspecies sex notwithstanding (and, after all, we had Kermit and Piggy). Stuart Little 2 is the kind of film that does its very best to be inoffensive while slipping in a couple of sly references here and again so that parents have something to chuckle about over their children's heads. Where Griffith is predictably cutesy, Woods--a veteran of Disney's Hercules and Final Fantasy: The Spirits Within--shows again that his voice was made for animation. Fox is the key to the franchise, though: his earnest good nature and occasional bouts of pathos carry the film through much of its choppier manipulations. More than the computer technicians, the Canuck actor (and there are a couple of strange jabs at our Canadian neighbours as well, come to think of it) animates the mouse with his timing and sympathetic mien. Still, Fox and Stuart Little 2's subversive elements can't save a sequel that takes another ninety minutes to tell the same moral that its first film already pounded into dust: size doesn't matter. That is, unless it pertains to the scope of one's ambition, invention, and choice of targets for its humour. Originally published: July 19, 2002.