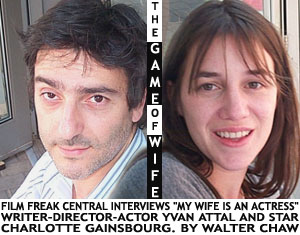 June 26, 2002|A hot and smoky day in downtown Denver (approximately thirty miles and apparently downwind from the Hayman forest fire that at the time we didn't know was started, somehow appropriately, by a lovelorn forest ranger) found me meeting Yvan Attal and Charlotte Gainsbourg at the café run by the Denver Art Museum. I was nervous about this interview, more so than most, mainly because I had nothing especially positive to say on the subject of My Wife is an Actress (Ma femme est une actrice), a seemingly autobiographical film--it's Attal's hyphenate debut--that is being praised for its romantic quirk but in which I could find neither joy nor connection. Its jokes too obvious, its characters unlikeable and shrill, and its conclusions too pat by far; I looked sadly over my unpromising notes on the ride over.

Dressed extremely casually in plain white shirt and khakis, Mr. Attal comes across just as he does on the screen: as a sort of Gallic Griffin Dunne everyman who vacillates between casual attention and passionate soliloquies. His wife Charlotte is one of France's most popular actresses (some of that due to her parentage: legendary singer Serge Gainsbourg and British "mod" actress Jane Birkin), an extremely shy and very charming presence when she speaks with her light BBC accent. A moment where Ms. Gainsbourg plucks a bit of the white ash falling from Colorado's apocalyptic skies from Mr. Attal's tousled hair demonstrates a level of simple affection and tenderness between this unlikely pair that's missing from all of My Wife is an Actress.

I warmed to the couple in that instant, even though the interview to that point had been slightly contentious and loaded--it's the hardest part of the job to be true to oneself when speaking with folks regarding projects that, for them, have been years in the making. It is during times like these that I understand why film critics are so reviled by the general population and why criticism is not seen so much as an art as an irritation in the United States. I did take some solace, however, in remembering that the top-rated television show in France, the birthplace of the CAHIERS DU CINEMA, is a book-discussion panel; I guess if anyone would, the French would understand.

Nothing if not tactful, I softened them up by asking the pair about the peculiarly violent and aggressive brand of feminism that is the most visible forefront of the New French Cinema.

YVAN ATTAL: I don't really know what to say except that we have a lot of woman directors and of course when women make films they are more interested in making films about women. In American cinema it seems that the main characters are predominantly men and it's pretty rare that a woman--
CHARLOTTE GAINSBOURG: But it's hard in France for women, too, to find good roles.

FILM FREAK CENTRAL: You've had pretty good luck, though, with strong and quirky roles with predominantly male directors.
CG: Yeah, but it's frustrating too when I see the kind of roles I could have if I were only a man.

I read an article some time ago about your efforts to preserve your father's house as a memorial to him--but I haven't heard if your efforts bore fruit.
CG: I still have the house but I want someone else to do it now. It's been too long and I can't do it anymore. It's quite a small house so to imagine people going in as though it were a museum is difficult, but you have to find a way and I'm sure someone else will figure out how. Maybe I'm too close to him--I don't want even one object moved--so it's better if someone else goes in there and does what I can't. If there's any memorial there, I'll be happy. I mean, at the beginning I didn't want anyone touching anything, now I'll just be happy if people can go in there and see what they can see.

Though you've said that this film is not autobiographical, there are clearly autobiographical elements.
YA: A few things are. It's the subject of the film though to show what is real and what is not real. There's a scene in the film for instance where a man asks what it's like to live with an actress and doesn't it drive you crazy which is the basis for the short film...

I Got a Woman from 1997.
YA: Right--so I thought it would be a good idea to expand the film by exploring what is real and what is not. So the film is actually meant to be a deeper exploration of that divide and that's why I wanted you to believe that this story is our story--why it's called My Wife is an Actress and that she and I play characters named "Yvan" and "Charlotte." Every time in the film you think you're about to hear Charlotte's last name we have some sound covering it so it's like a joke, you see, to play with reality.

There've been quite a few reality-testing films in the last couple of years, stuff like Mulholland Drive and Memento. Because of your interest in the genre, can you see yourselves making a more pure variety of that kind of film in the future?
YA: I love movies--every kind of movie. I would love to make a documentary, I would love to do another short theme, a comedy, you know, you just have to be sincere with what you really want to do. I don't consider myself an actor anymore, I'd really like to focus on directing but it is such an investment of time. I wrote My Wife is an Actress two years ago and here I am still talking about it so it is so important to believe in your project. It has to be vital to you.
CG: I'd love to make a horror movie.

What kind of horror films do you like?
CG: I like the old Polanski films. I love Repulsion and Rosemary's Baby.

Tell me about your future projects, Mr. Attal. I know you're working with Jean-Paul Rappeneau in the capacity of an actor next?
YA: Yes, I start next week on Bon Voyage--it's a great director with great actors and I really want to start. It's set in the 1940s and concerns the uncertainty surrounding the Vichy government. It's a comedy--I play a young guy, a thief, a hustler. And all of these people meet in Bourdain.
CG: I was involved with a few projects (Embrassez qui vous voudrez and Anna M. -Ed.), but after Yvan's film I've sort of been taking a break. I'll be doing a French film next, a first film so the director is not well known.

Do you like working with first-time directors or the veterans?
CG: I don't really think about that, really, I'm more interested in the quality of the screenplay.
YA: I'm really excited to work with Rappeneau, a veteran, brilliant director so that I can learn more about my craft of course--but if there's a young guy with a good idea, so be it.

The mod photographer, yes, in 1999's The Intruder?
CG: Right--that was fun but the film wasn't any good. And I worked with my uncle (Andrew Birkin in The Cement Garden -Ed.) and of course I love him so what can I say about that? And the only other one was [Franco] Zeffirelli (in 1996's Jane Eyre -Ed.), but he was an Italian who communicated to us in English. So I can't really comment on the difference between French and English directors.

Was Zeffirelli's flamboyant style difficult for you--he seems an opposite personality.
CG: It was a very difficult shoot for that reason and because I was essentially put in the middle of a conflict between Zeffirelli and William Hurt, so that was uncomfortable to be in that position. But I loved doing the film, I love that character and that story--and I liked it, in the end I really liked that experience. 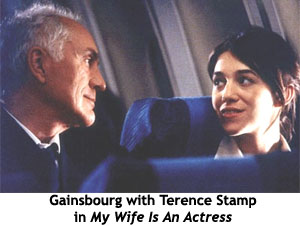 Tell me about the sister subplot and the strain of anti-Semitism that runs as an undercurrent in My Wife is an Actress--a concern that has recently gotten a great deal of international attention because of your last presidential elections and Woody Allen's comments at Cannes.
YA: Well, I agree with Woody Allen and I don't. I agree with him that he had to come to Cannes--he was invited to this great country, he is a great director, and he had a right to come to that festival, but he can't say that France is not an anti-Semitic country because it is. That's my opinion. When I wrote that story it was a year ago, but it was the same political environment and to be honest I could have done the same [anti-Semitic subplot] in any country. Jews everywhere are, how do you say, strange for people--so if I were doing the film here, in the United States, I could do the same thing--it's not just France.

You're making a statement about the universality of the Jewish experience?
YA: Yeah, but it's also a part of the Jewish thing that we always think that people are talking about us and we talk about them so we can see it both ways, if you know what I mean.

I know, Mr. Attal, that you were born in Tel Aviv--do you have any interest in making a film about the conflict there?
YA: Yeah, yeah of course I would love to do it, but I'm French--I grew up in France so I have a French point of view of the conflict. I would love to find a subject but I don't really have one. I was supposed to make a film about the Jewish community in France but I gave up on it for a variety of reasons and now it's too hard. It's too political to make such a film.

Too political in what sense? In finding funding, finding a suitably non-controversial subject...?
YA: What can I say, really, it's so stupid that people will commit to make a "Romeo and Juliet" kind of movie set in Israel with a Jewish Romeo and a Palestinian Juliet but even though everyone knows we have to commit to peace in that region, no one will make a major picture about it. You have to find a way to say something original about the situation. Of course the Palestinians deserve a country, it's obvious, and I'm not always sure that the Israeli government does all it can to foster that. But Israel needs to exist in security and the Palestinians need to admit that and they won't. The worst is the people who pay the price for their leaders' stubbornness.

It doesn't seem like a lack of passion is your problem.
YA: (laughs) Everyday I think about the conflict because I'm so close to it. My dream is that Israel and all the Arab countries will live in peace and I would love to find the right project to express that.