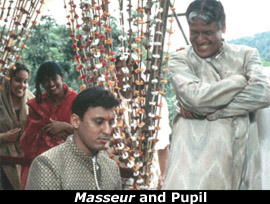 In other hands, this tale of backcountry wiliness and anti-Empire aspirations might have had more sense of purpose. It's the story of a Ganesh (Aasif Mandvi), an aspiring writer from Trinidad who fails as a teacher and winds up returning to the country. After presiding over his father's funeral, falling in with a conniving merchant named Ramlogan (Om Puri, hamming it up) who, impressed by Ganesh's meagre learning, half-flummoxes him into marrying Ramlogan's daughter Leela (Ayesha Dharker). Ganesh so devotes himself to writing that he temporarily drives his new wife away from him, but once he's finished his slim volume of religious trivia, all is forgiven.

But this is just the preamble. The Mystic Masseur kicks into high gear when Ganesh has to make a little money to support his massive Penguin Classics habit; taking up his father's massage trade, he somehow parlays it into a faith-healing and then political career. The story becomes outrageous, then bittersweet: After supplanting, through triumphant sneakiness, the local representative, Ganesh rides out of the country into the brick wall of big-time politics, where he faces the unconsidered foe of British colonialism. The material runs the gamut from the comic to the domestic to the political; all that is missing is a sensitive director to bring out its latent complexity.

Unfortunately, Ismail Merchant and screenwriter Caryl Phillips are not complex people. They have time for one narrative line and in its pursuit crowd out the backstory and context that might turn The Mystic Masseur into something more than a comedy of silly country folk--the film doesn't consider, either through dialogue or through stylistics, the characters' unthinking worship of education and how this connects to the colonized nature of their minds. The narrative itself makes some of these points, but they're straitjacketed by the film's straightforwardness. Unable to intellectually multitask, Merchant and Phillips fail to establish the motives of their characters' behaviour, inadvertently writing them off as comical Coen-esque bumpkins--without the Coens' saving grace of stylistic élan.

Merchant is of the point-and-shoot school of cinematography, with a minimum of camera set-ups and a total indifference to colour--there's no rhythm to settle into and an absence of compositions that convey the film's themes, meaning we're channelled even further into the main storyline and forced to accept its limited scope. Not only does this reinforce the screenplay's flaws, it's tedious to watch; giving this material to Merchant is like giving Faulkner to the director of The Cat from Outer Space--who might also, like Merchant, weed out the many threads that create the narrative's (and our) world for the sake of bland, professional "storytelling."

Admittedly, I say this having not read Naipaul, though on evidence of the bare bones of the film, that's a situation I intend to change. The strong 'plot,' as it were, is not enough to save the movie--that would be a job for a filmmaker capable of conveying the elements that create our lives even as we fancy ourselves autonomous. Instead, Merchant leaves everyone in The Mystic Masseur out of that world, whatever his good intentions might have been, resulting in something that can be endured but is best forgotten as you search for the source in the depths of your local bookstore. Originally published: May 31, 2002.