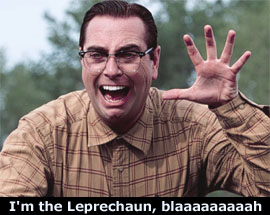 Like the better-looking but equally painful Mr. Bean movie, Red Green's Duct Tape Forever abandons everything responsible for the original show's success in favour of wet pathos and ersatz Life Lessons. Unscrupulous businessman Robert Stiles (Richard Fitzpatrick) necessitates a plot when he crashes his limo into a sinkhole near the Possum Lodge; the resulting $10,000 lawsuit forces the lodgers to fashion an enormous duct tape Canada goose in order to win third prize in a contest south of the border. This means that Red (Steve Smith) and the gang must abandon the swift movements of the show, which dart from skit to story in an attempt to keep things moving. Instead, he (and we) spend quality time with nerdy nephew Harold (Patrick McKenna) on a trip so long that a subplot involving Harold's intestinal fortitude appears to keep it from getting too dull.

It doesn't work. Nobody cares if Harold gets his courage from the Wizard--he's just supposed to be the butt of the endless variety of jokes provided by the series. But the film is so married to the idea of a conventional plot with a conventional resolution that it sabotages the humour of the source material--Harold's humiliations are either too feeble to register (he finds himself stuck in the goose, tee-hee) or too uncomfortable to enjoy (he is nearly abandoned by Red and a tagger-on). Red Green's Duct Tape Forever is also unnecessarily convoluted: byzantine developments involving corrupt policemen, hired thugs, and kidnappings of Harold exist simply to justify the running time, and they reveal in their sloppy, mechanical nature the venality of the whole production, which is to capitalize on a property rather than to give any real pleasure.

There is also the matter of Eric Till, whose direction is in the time-honoured tradition of Canadian hacks: stay wide to catch everything and don't cut in come hell or high water. Not only is this boring to witness--not necessarily a problem for a slob comedy--it short circuits what little humour remains by defusing the tension, which is essential for building to a punchline. Furthermore, he demonstrates no skill with actors; McKenna is allowed to mewl and fidget far beyond what the character requires while the subdued Smith slowly fades into a soft grey mass to the left of the screen. A couple of actors rise above this--Peter Keleghan and Melissa DiMarco do their best--but the rest act as though they are sinking into tar. With its combination of a woodland setting, haphazard visuals, and amateurish performances, the film under Till's guidance suggests that it might really be the gag reels from the Friday the 13th films intercut at random.

The film's production notes include the following quote from a nameless crew member: "I don't know if this feels like working. It's more like being on vacation up north." The next time some faux-populist dingbat accuses an art film of "self-indulgence," send them to this movie: In terms of hubris, Red Green's Duct Tape Forever makes Napoleon look like a ten-page flipbook and Fellini a housepainter in Tuscany. If a vacation is what you want out of a film shoot, I suppose that Steve Smith is your man, but if you want to see something enjoyable out of a "vacation," I suggest you seek elsewhere. Originally published: April 12, 2002.