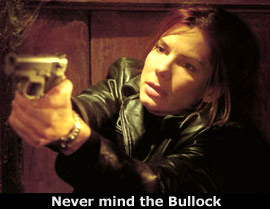 by Walter Chaw A shallow Leopold and Loeb riff crossed with a heaping helping of the kind of law-chick bullstuff made popular by the horrible novels of Patricia Cornwell, Murder by Numbers trudges along with its tired formula repertoire like a funeral procession for the genre. For a spell, it feels as if the film will transcend the unpromising irony of its title with a female protagonist painted as unflattering and tortured, but by the time the final credits roll after an unforgivable third act, Murder by Numbers washes out as just another imminently forgettable movie starring Sandra Bullock.

America's pug-nosed sweetheart is Cassie Mayweather: spunky homicide detective. Her new partner is moribund Sam Kennedy (Ben Chaplin), and it's not ten minutes before the two find themselves in bed. The potentially interesting twist is that Cassie is the sexual aggressor, apparently working out a deep dark secret that we glimpse in sepia-stained flashbacks. Meanwhile, closeted homosexual chums Richard (Ryan Gosling) and Justin (Michael Pitt) decide to kill someone because of a larcenous misinterpretation of Nietzsche's "will to power" equating freedom with premeditated criminal activity.

Hot on the case, Cassie and Sam ponder dry-erase boards under flickering fluorescents while failing to provide an explanation for why, exactly, the film is called "Murder by Numbers." It neither uses The Police tune as its anthem nor plays with numbers like North by Northwest, Se7en, or even Peter Greenaway's Drowning by Numbers. The most confusing aspect of the film, however, is why Cassie appears wholly incapable of defending herself in any way, shape, or form. Remember the good old days when they taught self-defense in police academy?

What Murder by Numbers does do is shake itself out as a subtle variation on I Spit On Your Grave in which our purported heroine pathologically avenges a hatred for men spawned by a past victimization. Like that classic bit of exploitive schlock, Murder by Numbers is utterly lacking in irony with regards to its protagonist's unsavory motives, taking what could have been a very interesting derivation of the police procedural (something like an Angel Heart, perhaps) and contorting it into another bland bit of populist fluff--albeit bland populist fluff featuring a baboon attack.

What's more of a shame is that Murder by Numbers squanders fantastic performances by Pitt (late of Hedwig and the Angry Inch) and Gosling as well as a wonderfully- written and edited interrogation sequence. Hardly a welcome or expected follow-up to director Barbet Schroeder's raw, personal, and often intriguing Our Lady of the Assassins, Murder by Numbers is a badly underwritten and cheerless affair. It looks good, yet it feels empty and seedy to no fruitful end. All of its revelations are rote, its character edifications are flat, and so much of it is awkward and self-conscious that the picture becomes an endurance test before its ending, when it becomes an unintentionally hilarious look at how the modern thriller can't seem to help but fall back into monotony and mawkish manipulation. Same movie, different title: By the numbers, indeed. Originally published: April 19, 2002.