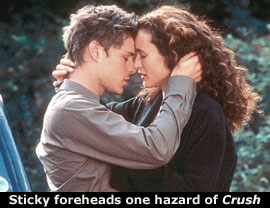 by Walter Chaw A punitive film that has one of the more unpleasant third acts of any film in recent memory, John McKay's Crush is an atonal estrogen opera that demonizes feminism while gifting the most sympathetic male of the piece with a nice vomit bath at his wedding. It isn't political but rather misanthropic, a film that begins genially but ends with enough open contempt for each of its three protagonists that Crush seems something of an anti-romantic comedy. That would not be a bad thing save for the fact that the film aims for frothy uplift on the one hand and a heart-wrenching Love Story twist of fate on the other, with nary a whiff of satire or self-awareness to be found in-between.

Kate (Andie MacDowell) is a Yankee headmistress at a British boarding school who gets together with her two spinster pals, frumpy Janine (Imelda Staunton) and icy Molly (Anna Chancellor), every weekend to drink gin, eat caramels, and complain about their miserable dating lives and their lack of children. Because we're familiar with this kind of scenario, before Crush is over we know that the picture will somehow solve both problems. Kate begins a torrid affair with a man at least fifteen years her junior, Jed (an excellent Kenny Doughty), leading her to stop dressing like an old lady and start talking love and happiness. Suspicious of Jed, Janine and Molly conspire to undermine the relationship to disastrous consequence.

Crush is whimsically scored in the early going, announcing itself as a farce along the lines of Four Weddings and a Funeral and, indeed, sporting two of that picture's female leads. (MacDowell and Chancellor.) Because MacDowell is reasonably good at playing an emotionally unavailable woman coaxed into hedonism (both of her marginally successful turns are as such in sex, lies, and videotape and the aforementioned Four Weddings...), she is reasonably good in Crush. At its essence, in fact, her performance here is the offspring of those two aforementioned turns.

Unfortunately, Crush's ambitions carry it past its amiable beginnings into the ignominious land of disingenuous maudlin. It wants desperately to be realistic but succeeds only in being awkward and foul. In its zeal to have a message about the enduring nature of friendship, the film tests it in the most sadistic and convoluted ways possible, sacrificing its only vaguely interesting character in order to punish Molly before directing Kate towards becoming an opportunistic gold-digger taking advantage of a genuinely good man. Luckily for milquetoast Janine, she is only asked to betray her commission as a police officer in the pursuit of another amazingly bad idea.

Crush is two films, one fairly decent and the other pretty terrible. It finds its confidence in the beginning but loses its way upon coming to believe that the demonstration of its points necessitates a drastic change of tone. Its ugliness mars the sunniness of its conclusion that, seeing as it involves binge drinking, chain-smoking, and mocking one another's lifestyle choices, isn't all that sunny to begin with. Mistaking its unkind contrivance for courage, Crush is a deeply problematic film: nice to look at (Henry Braham's cinematography is sublime) yet ultimately so heartless (nihilistic, even) that its messages of loyalty and perseverance are betrayed. Originally published: April 19, 2002.