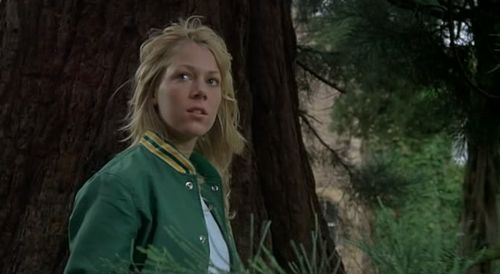 by Walter Chaw John Hough's cult favourite The Watcher in the Woods is a movie about how a camera presents a point-of-view and of how that point-of-view, if it's not attached to a specific identity, can become menacingly voyeuristic; shame that The Watcher in the Woods isn't also about a story with characters in whom you're interested and performances that don't set teeth on edge. One of the more unusual Disney productions of the late-Seventies, the film becomes yet another showcase for an aging Bette Davis's hiccupping hag archetype and, sadly, an opportunity for figure-skater Lynn-Holly Johnson to demonstrate how good athletes seldom become good actors.

Mixing elements from two other Hough chillers--the unseen of The Legend of Hell House and the focus on possibly supernatural children in Escape to Witch Mountain--The Watcher in the Woods follows the Curtis family as they settle into a giant mansion in the British countryside. Big sister Jan (Johnson) immediately sees a blue light in the forest surrounding their new home (a peculiarity of the film is that most of the "sightings" happen in the daytime), while little sister Ellie (Kyle Richards) finds a puppy and begins channelling a malevolent spirit. The spirit, the titular watcher, could be "Karen," the long lost daughter of strange Mrs. Aylwood (Davis), reaching out from beyond the grave--but as the box art for Anchor Bay's DVD boasts "The Most Legendary Monster of All Can Now Be Seen for the First Time," one suspects that what haunts the woods is something other than a little girl's ghost.

It can be said that The Watcher in the Woods is little more than a somewhat failed variation on the menstrual fairy tale (note the spot of blood introducing the unpleasantness, an extended horse ride, the absence of the father, the prominent wearing of the colour red, the journey into wood and water), but the fitful effectiveness of the film, such as it is, derives from its exhausting use of the unattached PoV. It's an effect that creates an inarguably unsettling mood, an air of vulnerability for characters denied the assistance of a graceful screenplay or a worthy cast. (Of those assembled, only Ian Bannen as one of the lost Karen's childhood friends comes off as more than an embarrassed, half-assembled sketch.) Unfortunately, Hough even misuses and underuses his floating subjective camera, his laudable restraint in revealing the beast undermined by an abuse of 'jump scares' (a cat leaps out, a plastic carnival bogey appears for no reason) as well as a few too many misdirections and red herrings. The film mistakenly believes it's fooling you every time it tries.

With a conclusion that is as unfair as it is nonsensical (it introduces a theory for the strange doings stolen directly from the "Little Girl Lost" episode of "The Twilight Zone"--Richard Matheson producing the source material for it and Hough's The Legend of Hell House), The Watcher in the Woods is painful for its execution, its datedness, and its missed opportunities. Whenever it appears as though mirrors will be used in an interesting thematic way, the film spends its time on terrible "laser" blasts; whenever it seems as if the woods will be utilized to their full chthonic potential, Jan is allowed a few too many lines of stilted dialogue excruciatingly delivered. The Watcher in the Woods is its own worst enemy--far better as a curiosity during a time when Disney was offering the worst mainstream movies the world has ever known than as a horror film the whole family can enjoy. It's probably far better remembered than revisited.

THE DVD
Anchor Bay's DVD release of The Watcher in the Woods is just awesome. The 1.85:1, THX-approved anamorphic transfer is unbelievably lush and brilliant. Though there are a couple of brief instances in which there appears a scratch or other minor print blemishes, it's frankly impossible to believe the negatives for this piece are over twenty-two years old. Perhaps the only thing more impressive than the edgeless, artifact-free video transfer is the crystal-clear remix (in Dolby 6.1 EX and matrixed DTS-ES configurations), which makes tremendous use of the rear channels with atmospheric effects. Dialogue comes through with a sharpness that causes one to wish that the words were worth listening to. Only the bass channel is underutilized, but that's the height of quibbling.

A commentary featuring director Hough is largely uninformative: his cast anecdotes and production details do little to elucidate beyond the very basics of the piece. Hough occasionally marvels that the film looks better than he remembered, and does have a pair of notable tales to tell regarding the divine Ms. Davis, but the track is punctuated by long silences rather than any true wealth of information. The same could be said of Hough's optional commentary for two alternate endings, one approximately eight minutes long, the other fourteen. In both, the "monster" can be seen in all its puppet glory and frankly, it's pretty awesome.

The first alternate ending holds promise that The Watcher in the Woods could have been something truly dark and unsettling; alas, The Mouse mentality of "happily ever after" takes over, resulting in a denouement even cheesier than that of the final version. Hough confesses a deep disappointment in each of the film's three endings, waffling that his true choice would have been a conclusion falling in a compromise between the three that were shot. I would have liked the first alternate ending minus its second half, though such an ending (nihilistic and discomfiting) would never have found a home in a Disney production of that era. Anchor Bay's sterling tradition of absolute quality and devotion to its product continues with two theatrical trailers, a superlative biography of Hough, a TV spot, and a twenty-page insert booklet featuring cast and crew interviews. Originally published: March 10, 2002.