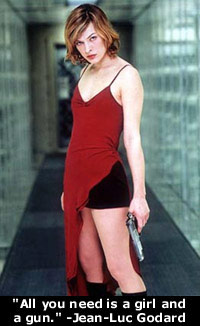 by Walter Chaw A group of highly-skilled soldiers infiltrates an abandoned facility where all the civilian workers of a multi-national corporation have mysteriously died. Suffering a holocaust themselves immediately thereafter, the surviving members of the squad break down into a cowardly tech-specialist (Eric Mabius); a covert agent of the corporation in question (James Purefoy); a tough-talking Latina with a big gun and a chip on her shoulder (Michelle Rodriguez); and a woman suffering from bad dreams who seems particularly adept at fighting the bad guys (Milla Jovovich). Discovering that the folks in the "hive" died during military research gone awry (thus unleashing hordes of nearly-indestructible villains), the foursome attempts to get out before a desperate time limit expires while also containing the evil to the site of infection.

Paul W. S. Anderson's Resident Evil is a louder, lazier, wholly jump-scare dependant rip-off of James Cameron's Aliens. It cribs the plot, the characters--it even steals the conniving robot from the prequel to that SF-action classic, Ridley Scott's Alien. Distinguishing Resident Evil from these films (putting aside the drastic drop-off in quality) is that its rampaging monsters are not extra-terrestrial but uniformed and business-suited bogeys "borrowed" from George Romero's Dawn of the Dead. Despite the amount of theft of respectable genre sources going on, by the end it resembles a somehow less coherent and louder version of Steve Beck's bloody music video Thir13een Ghosts. Resident Evil isn't a product of its cinematic predecessors so much as an MTV, sugar hysteria, and PlayStation cocktail.

Based in actuality on a wildly popular videogame series of the same name, Resident Evil the film suffers the same malady afflicting Resident Evil the first-person shooter. The acting is horrible, there are far too many 'story' interludes the height of "X Files"-lite ("The Corporation is making a evil virus! And the government might be involved!") distracting from the central fetishistic Romero-glee of indiscriminate zombie murder, and, most damning, there exists a lamentable inconsistency in its lore. The advantage the movie has over the game is that Jovovich isn't shy: Her full-frontal nudity remains intact just weeks after John McTiernan's Rollerball was released sans a much-hyped money shot of Rebecca Romijin-Stamos.

Resident Evil presents heroes in hopeless situations only to have them appear in the next scene unscathed in a different environment; it has someone chomped by dozens of zombies look good as new a moment later; it has zombies that bite but don't chew; and it is remarkably squeamish when it comes to showing gore. One scene in particular--with Jovovich squaring off against a roomful of undead pooches--climaxes with an extreme close-up of a gun firing and a spent round hitting the floor. Save for a prologue in which an evil computer goes postal and the aforementioned bit of prurience wherein Milla crawls around wearing a sheet of paper (shades of The Fifth Element), Resident Evil is a theatre-shaking, strobe-lit monstrosity, a prime example of low-attention span cinema. The scariest part of the entire calamity is an epilogue that promises a sequel. Originally published: March 15, 2002.