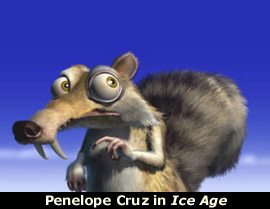 by Walter Chaw Borrowing heavily from Disney's aimless and laggard Dinosaur, Fox and Blue Sky Animation's Ice Age is burdened from the outset by the vaguely disturbing reality that the titular epoch spells doom for most of the heroes of this animated mistake. When our quartet of cuddly endangered animals saunters off into the sunset, it feels disturbingly melancholy--something director Chris Wedge tries to assuage with a tedious epilogue that beats a long-dead running gag into the loam of an increasingly belaboured film.

Manny the mammoth (Ray Romano), Sid the sloth (John Leguizamo), and Diego the sabretooth (Denis Leary) join forces to return a lost human baby to its tribe in an arctic wilderness at the dawn of the Ice Age. Intermittently, a prehistoric squirrel, Scrat (Wedge), engages in a slapstick pursuit of a slippery nut. Meanwhile, Diego's evil tiger pals (each of them sporting Spanish names for no discernible reason) conspire to ambush our lovable misfits before they reach the people.

Ice Age is distractedly inconsistent in its tone and internal reality. In a wordless prologue involving Scrat (widely seen in a much-lauded teaser), Ice Age establishes that its characters can survive falls from impossible heights and comical smushing. Yet Ice Age also presents a pair of haunting fatalities and a dimly-suggested massacre of a hero mammoth's wife and child--a traumatic event that explains the mammoth's solitude and bitterness, but not his sudden devotion to rescuing a product of the (human) culture that caused his widowerhood and exile. A case could be made, I suppose, for Manny wanting a surrogate child (and Ice Age does indeed make that case), but a richer vein of forgiveness and acceptance should have been mined in the relationship between hunter and prey. It's pushed so far into the subtext that it's invisible, beneath flat jokes, stink gags, and a bit involving tracking excrement all over someone's dinner.

Though I was mildly interested in what appear to be a pair of homosexual rhinos, Ice Age is further demonstration of an American animation industry that pumps out indefatigable barrels of the same old interchangeable Disney-esque garbage. The vocal performances range from monotone drone (Romano, Leary, and Goran Visnjic as the evil sabretooth) to spastic (Leguizamo, of course, and Wedge)--leading me to wonder if Ice Age could be read with more profit as an underground stoner comedy--and the action set-pieces run out of imagination long before they're allowed to fizzle out.

I found Ice Age akin to witnessing an appallingly inept comic suffer a protracted flop-sweat. Disjointed, packed with obvious filler, and seemingly incapable of following through on its plot threads or capitalizing on its best ideas, the film is just plain difficult to watch. With no chemistry between its characters and a conspicuous lack of spark and impetus as well, Ice Age feels dreadfully inanimate for an animated entertainment. Without question, it's the biggest disappointment of early 2002. Originally published: March 15, 2002.