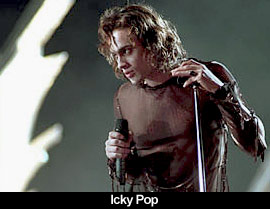 by Walter Chaw The latest big-screen adaptation of an Anne Rice Vampire Chronicle, Queen of the Damned looks great but remains the sad product of Rice's juvenilia and velvet eroticism. Its sweaty mythmaking matched by its thirty-something-decade whining, the film substitutes blood for semen in its kinky puerility (a rose-petal love scene is a classic in scarlet euphemism) and becomes boring and pat when it should've been trashy and unapologetic. The greatest problem with the film isn't as obvious as its bad writing and weak structure: it's that Queen of the Damned tries to make sense where none is to be made.

The vampire Lestat (Stuart Townsend) awakes from a century-long sleep (thus invalidating the cheap finale of Neil Jordan's Interview with the Vampire), heeding the call of bad Korn-ish garage goth-punk and the promise of fame as a vampire frontman. In flashback, we see Lestat's creation at the hands of a campy Marius (Vincent Perez, doing his best John Waters) and meet young Jesse (Marguerite Moreau) as her succubus foster mom Maharet (Lena Olin) is sending her away to study with the Talamasca, a collection of intellectuals studying the supernatural. If you've read Rice's novels, you'll note gaping omissions and unforgivable abbreviations; if you haven't read Rice's novels, you'll notice them even more.

Lestat "outs" himself and, in the process, "outs" all of vampiredom. (Queen of the Damned clearly substitutes handily for an adolescent homosexual awakening drama, something supported by Lestat's "creation" myth at the hands (and neck, and wrist) of fey Marius. It's all so "ten years ago.") Vampiredom is unhappy with the publicity and decides to murder Lestat (in one of many classic head-scratchers, they decide to wait until the absolute highest profile moment at a Burning Man-like gathering to "silence" him), but the titular Queen of the Damned (Aaliyah), the mother of all vampires, takes a liking to Lestat and protects him.

Though Queen of the Damned opens with an homage to Robert Wiene's The Cabinet of Dr. Caligari, its visual style is more closely akin to Tarsem Singh's The Cell (though neither as trippy nor daring). One scene impresses in particular: Our Rock God bloodsucker Lestat (portrayed in a past incarnation by Rock God bloodsucker Tom Cruise) stands on a pathway between reflective pools playing a mean fiddle for a pair of alabaster statues. Taken with a suitably appalling tableau of carnage at a beachfront property, an indescribably nifty digital shot of a Death Valley throng in thrall, and sainted pop star Aaliyah's undulating 90lb. terminator, Queen of the Damned is occasionally a truly captivating visual experience. Sadly, the compression of Rice's sprawling narrative results largely in incomprehensible jargon, long stretches of gaping inaction, and a bushel of ragged plot holes.

Queen of the Damned functions much better as a sociological exercise than as a narrative, in much the same way as the badly-overwritten Anne Rice historical melodramas (sort of Tolkien with bodice-ripping and for vampire mythology) upon which it is based. Not terribly interesting in of itself if you're past a certain emotional age, the desire for the life of a Lost Boy speaks to a kind of empowerment through disenfranchisement that points to a self-mutilation-indicated developmental alienation. Embedded in the teen fascination with being a vampire is imagining the same kind of perks package offered by being a rock star (or a movie star), so it's almost a fait accomplí that a movie about a rock star vampire would have its charms. What better hope for a self-pitying, conventionally unattractive or insecure teen than to become suddenly gifted with political charisma, sexual prowess, an intimate club of others of your "kind," and the power to wreak fearful vengeance on bullies and doubters.

Obligingly, then, Queen of the Damned offers a sequence where bullies are conquered, a trope having to do with influencing mobs of people, a private club peopled with folks who understand our freak-hero's hang-ups, and a few vaguely naughty sequences involving eager groupies. More importantly, despite the advantages conferred by vampirism, it offers ample opportunities to feel sorry for oneself modeled after the maundering Byronic model: lonesome vantages under glowering skies while clad in flowing black. Rich and powerful, beautiful and immortal, and so alone...so very alone. It's not so much an archetypical romantic irony as a manic-depressive fancy brought on by a hormonal imbalance.

Queen of the Damned suffers from the same brand of confusion as the loneliness and fear that fosters a wish for a Don Juan superhero invulnerability. (The key moment in the film, in fact, is a strange reimagining of the flying love scene from Superman.) It sees itself as tragic when it's just sort of pathetic, and what could have been a campy indulgence in that childish power trip becomes a misguided attempt to manufacture high art out of a sow's ear. The film is Murnau's Sixteen Candles, complete with a prom gone wrong and a cheery fade on our happy (undead) couple. Better luck next century. Originally published: February 23, 2002.