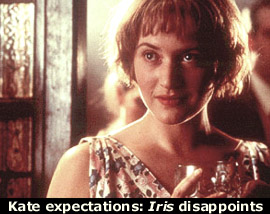 by Walter Chaw Iris wants nothing more than to be an objective look at the life and decline of British novelist Iris Murdoch (played by Kate Winslet and Dame Judi Dench) from insouciant free-love literati to decrepit Alzheimer's victim in the care of her stuttering husband, novelist and critic John Bayley (Hugh Bonneville and Jim Broadbent). But the film confuses objectivity with sentimentality, and in the process obscures its titular protagonist with maddening fragments meant to elucidate her brilliance. Iris makes the mistake of assuming that its audience is well versed in the work of Murdoch and Bayley--enough so that the loss of her mind is one that is tragic beyond the spectator's basic human decency. Iris also makes the mistake of not allowing Dench the opportunity to play Murdoch as anything but a woman in mental decline, leaving the "pre-disease" spunk and vitality to a game Winslet. The "before" and "after" shots are two different people and the film just isn't agile enough to carry an illusion contrary.

Iris is wilfully unpleasant and at a certain point it takes a turn for the grotesque and maudlin--its "so there you have it" humanism at odds with its instinct to have Winslet skinny dip in symbolic bliss and Dench dance within her dementia in a sunbeam. That Dench and Broadbent manage to provide two of the best performances of last year in a movie this poorly conceived and executed is as good a testament as any to Dench's dignity (unflappable even in the face of the James Bond franchise) and Broadbent's emergence as an actor to be reckoned with. Between the two older thespians there is a frisson that can only be described as contentious, devoted, and truthful--but Winslet and Bonneville's younger pairing fail as both narrative device to the larger story and as self-contained story.

Accordingly, Iris fails whenever it flashes back to Winslet and Bonneville--the former mannish and unkind, the latter mannered and awkward. Why the ostentatious young Iris would ever choose social cripple Bayley is a mystery only slightly dispensed by the revelation of her habitual bisexual cuckolding of him. The problem of why the decent Bayley would stand for the insufferable Iris is only marginally exorcised by the film's repeated declarations of Iris's (otherwise mysterious) desirability. Iris works when it works solely on the strength of Dench (who manages to find truth in the middle of a stunt role) and Broadbent. There is an honesty to their relationship that shames the rest of the film, a purity in their performances that throws the self-conscious festival crowd artificiality of the rest of the production into sharp relief. The defining irony of the film is that like Dame Murdoch in the throes of her illness, Iris is lost, confused, and, perhaps most painfully, very occasionally brilliant. Originally published: February 15, 2002.