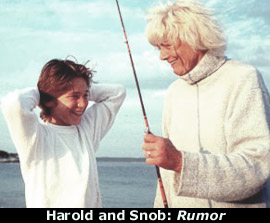 by Walter Chaw A Rumor of Angels is a maudlin tearjerker in the rarely interesting "gimp on the hill" tradition (The Man Without a Face, Finding Forrester, Heidi): a child befriends the town outcast to teach us all a little about acceptance through a series of rote vignettes. Peter O'Fallon's belated follow-up to his claustrophobic neo-Tarantino gangster flick Suicide Kings is long on twinkly-eyed close-ups and short on shame. A young boy (Trevor Morgan) trespasses on a wizened hag's property (Vanessa Redgrave), gets shot at, suffers a post-traumatic stress fit at a bridge (the source of which is not ever a mystery, considering the boy's mother has recently died), and gets picked up by his weird uncle (Ron Livingston, overacting). There is never a question that the boy and the old lady will become dear pals, never a doubt that they will fill a void in one another's life, and never an uncertainty that the kid's skeptical parents (Ray Liotta as his dad and Catherine McCormack as his stepmother) will eventually come around.

The question, then, isn't whether A Rumor of Angels holds any surprises, but whether it tells its tired tale with a reasonable degree of dignity. The answer arrives when young James (Morgan) has an emotional epiphany by tearfully (and repeatedly) screaming "raccoon" to the uncaring sky. I wonder if I have a heart of stone to so consistently and predictably remain unmoved by films that go so far out of their way to sadden me. With issues of dead sons sending Morse Code messages to bereaved mothers, absentee fathers called to the mat by insufferably wayward brats, over-indulgent step-parents resolutely providing changes of underwear, wasting and predominately symptom-less disease, and a finale that might have been mystical but for the fact that it's a spastic miscalculation that turns Redgrave into a talking lighthouse, it seems as though A Rumor of Angels (based on a dated bit of 1935 spiritualia called Thy Son Liveth: Messages from a Soldier to His Mother) has all the bases covered for calculated weepers save a twilight game of catch between a dead dad and his boy. I suspect if the film had gone on for another fifteen minutes, we would've seen that, too.

A Rumor of Angels features a typically commanding performance by Redgrave (though it pales in comparison to her work in 1999's Mrs. Dalloway), against which the rest of the cast suffers. Liotta sleepwalks through another variation of his worn crinkly-eyed maniac persona, a bashful McCormack seems afraid of her thankless role as the evil substitute mom, Livingston is horrendous in affecting a bizarre Zen hillbilly, and young Morgan is ear-splittingly strident and wholly unsympathetic. Each time someone shares the screen with Redgrave, they're instantly and handily blown off it by the strength of her presence. Eventually, Redgrave herself is betrayed by a script that demands the action be dictated by metronomically spaced reveals (an entire character pops up apparently for the express purpose of dropping a particularly unsurprising bomb) and clumsily established opportunities to wrest tears from reticent ducts. A Rumor of Angels is melodrama in the increasingly devalued "family" genre--devalued because family-appropriate fare is too often the kind of simple-minded fable that Garry Marshall and the Hallmark Channel long ago corrupted into self-parody. Originally published: February 1, 2002.