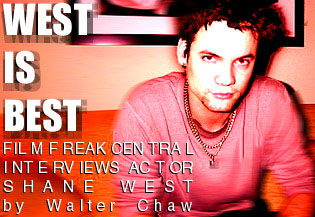 January 11, 2002|Shane West loves horror movies--explanation, perhaps, for his participation in the Wes Craven-produced Dracula 2000. And he has a knowledge of them that belies his relatively tender age of twenty-three. It's an undercurrent of the slightly wicked (with his horror jones and his punk band Average Jo) that fuels his persona across various heartthrob fansites dedicated to celebrating the young, the pretty, the slightly dangerous. Mr. West's knowledge of film, his respect for his craft, and his politeness and obvious decency are qualities each that seem all too rare in any walk much less Tinsel Town. It's early yet in Mr. West's career, the upcoming adaptation of Nicholas Sparks's A Walk to Remember is only his second leading role, but it's his performance as the soulful Eli Sammler on ABC's well-regarded drama "Once and Again" that has been the key to his rising popularity and critical recognition.

Mr. West is not like most of his peers: he's neither cocksure nor flippant, he appears grateful for where he is, and he thinks that Tobe Hooper's The Texas Chainsaw Massacre is a work of genius for its use of sound and image. It's hard for a young actor to be taken seriously, particularly with the general quality of films starring young actors being cranked out in the noisome wake of Titanic, but Shane West deserves a shot. I hope he gets it.

You were only on the set of Ocean's 11 what, one, maybe two days? Did you get a sense of Soderbergh as a director?
It was only a day--and it was great. It was kind of a whirlwind but it was a lot of fun. I felt lucky that I had a line focused to George and two to Pitt. Soderbergh was amazing to work with, it was all "what do you think?" with him. Ours was a written scene, but most of it was ultimately improvised--Soderbergh would just go around and ask, "Okay, what's your problem?" Mine was I didn't know what was going on, Barry [Watson] didn't know if folding was good, Josh Jackson thought he was good at poker. It was a fun opening for the film. On a personal note, though, the guy's great--he's from Louisiana, I'm from Louisiana. I saw him in a Carny's restaurant there after Ocean's 11, and even though I did work a day on his film, I wasn't sure he'd remember me. I'm always like that, I never think people will remember me--but he waved me over just to say hi. He's really just a great gentleman.

You've been fortunate to work with a lot of veteran actors as well as directors this early in your career--it's two films with Peter Coyote now, isn't it?
It is--but it's funny that the majority of films that I've done have had more people my age than they've had a lot of older people who'll truly sit down and talk with you. A lot of the time, I don't even get to work with the great people who are in the same film as I'm in, but shooting on different days. Christopher Plummer, Bebe Neuwirth--and especially most of the cast of Ocean's 11. Peter Coyote's a very eclectic guy with a very interesting past. He gave me his book Sleeping Where I Fall and he told me a little about his trips through this world. He did something very cool with me on set: after a take he said, "Let's do something very different for this next one." In six takes we did six different reads, giving me an opportunity to stretch, and giving the director a lot of different ways to go with it.

After whom would you most like to model your career?
I would love to have a career reminiscent of a Brad Pitt or a Johnny Depp--especially Depp. Coming form "21 Jump Street" and Nightmare on Elm Street to Platoon, I'm like, "That, that's really unfair!" (laughs) I mean, he never had to have the film or films that he needed to be really embarrassed by, and that's not fair. I also like Pitt because he's a leading man but he's proving himself to be a character actor, and I hope to be seen the same way one day. 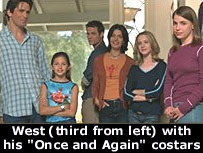 So like most of the men in the United States, I'm a big fan of Sela Ward, the star of your show "Once and Again".
She's great, she's gorgeous. This year I finally had more scenes with her--the second episode this year was basically just me and her, with her helping me figure out where to go with my life, essentially.

Do you have a preference between working in television or film?
I prefer film, but the TV show that I'm on is basically practice for a film. It's not like "Friends", it's not a half-hour sitcom sort of thing, it's an hour drama--it's shot on film, it takes about eight days to shoot one episode, so basically shooting "Once and Again" is like shooting a long movie because it's handled in the same way. 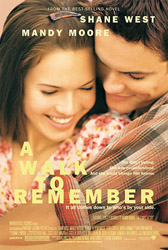 Are you unhappy being typecast as a high school kid now that you're into your early twenties?
When I shot A Walk to Remember, I was 22. After this, I really want to try to go after the more adult characters. (long pause) It's tough--it's tougher for guys to break out of the teen mold.

Why is that?
Well look at Drew Barrymore and Charlize Theron, fine actresses, but age-wise, they're only about two years older than I am--but would anyone ever put me opposite them as equals or love interests? Probably not. You get more Gwyneth Paltrow/Michael Douglas pairings where the man is far older--it's kind of what Hollywood does. I'm not opposed to taking my lumps, that's just the way things are, but it's frustrating.

Kind of a male fantasy thing? The old man and the young super model?
Right. I know a lot of women in the industry who are really disappointed with the way things are, but if you want to work, that's what you deal with.

I hate to ask because I suspect you have to answer this question so much, but what was it like to work with Mandy Moore?
She's great, she really was. I didn't know what she was gonna be like coming in being the kind of icon she is in the music industry. She's 17 and I was like, "I hope she isn't this jaded diva," but she wasn't--she was really sweet, one of the nicest people I've ever met, and I don't think she's ever gonna get jaded.

She's really her own person. I don't listen to the kind of music that she makes, but I look at her and I begin to realize that her stuff, especially her new stuff, is pop music for sure, but they're really songs and not hooks.

How's your own band going?
The band's doing good, we have a song on the soundtrack, track 11 on the CD--this is our first proactive move as a band. We weren't inviting labels to shows or talking to managers, but we're moving forward now to see what's going to happen with it.

Tell me about your music--who're your influences?
I was born in '78, my dad was in a punk band, he opened for Blondie, so I was raised on Pretenders, Siouxsie and the Banshees, The Clash--all that kind of stuff. We're consciously not trying to emulate anyone though if I had to nail it down, probably The Clash or The Kinks--their hooks and their melodies are what I'd really like to bring into what I write now.

What do you think of your career so far?
I have friends who have made a popular movie and are in the spotlight and stay there because they're smart about what they do--and others who've made a popular film and never done a good thing since. Critically well received or not, my early roles were good exercises for me, good places to start. Playing a bad guy, playing a nerd, things that were different, and fun, and challenging for me. In Walk to Remember I get to do something that's a little more complicated and I feel as though however it's received, this is the path that my career needs to take for me to grow as an actor.