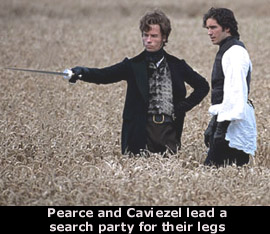 by Walter Chaw Preserving the main events of the bombastic blunderbuss novel on which it is based, Kevin Reynolds's adaptation of Alexandre Dumas père's The Count of Monte Cristo also jettisons what meagre subtlety there was in the source material. The film, an attractive swashbuckling spectacle, is pleasantly campy for its first hour and a plodding endurance test for its final eighty minutes, an initially agreeable, if ridiculous, escapist (literally) flick that bloats to the dimensions of standard Hollywood offal.

The Count of Monte Cristo is so worried about earning back its budget that it has erased all semblance of controversy and character ambiguity: the good guys are lily white and the bad guys are grotesquely stained. Accordingly, one can recognize the side a character's on by his oral health: thirteen years in an early nineteenth century French prison does nothing to despoil our hero's heavenly choppers, while those same thirteen years in comfort in Gay Paree wreak dental mayhem on our snarling villain. The Count of Monte Cristo is so uncertain that you can assimilate thorny characterizations and plotting that it provides for you a series of visual aids, lest you be put off by independent thought.

Edmund Dantes (Jim Caviezel) is an illiterate dullard who, after meeting Napoleon in a pleasantly overblown prologue, is arrested for treason in Marseilles and shipped off to Chateau D'if island prison, which is presided over by the wry warden Dorleac (a hilarious Michael Wincott). It appears as though boggle-eyed naïf Edmund was betrayed by his best friend Fernand (Guy Pearce), the chief magistrate Villefort (James Frain), and the orthodontically disabled Danglars (Albie Woodington)--and as he rots away ("rots" in the sense that he loses neither weight nor teeth), poet/priest cellmate Faria (Richard Harris) aids him in plotting sweet revenge. Because there would be no movie without it, and because the previews and a basic classical education give it away, I'll tell you that Edmund escapes prison to become the titular nobleman and that he has a reunion with his lady fair, and I'll also assure you that there are a handful of well-staged swordfights erratically sprinkled throughout to occasionally jolt the slumbering audience into brief attention.

Readers of the novel will be relieved to know that the Woody Allen/Soon-Yi indentured sex-slave subplot hasn't made it to the final draft of Jay Wolpert's screenplay, though the addition of a pugnacious Puerto Rican man Friday (Luis Guzmán) rings perilously close to unkind caricature. For the most part, the major changes between film and novel are welcome ones that update or eradicate the more peculiar cruelties and perversions of the Dumas work. Yet where the book at least has the albeit unintentional side effect of inspiring sympathy in its cast of predominantly decent baddies, the film is so skittish that it tries to convince that 140 minutes of ugly revenge fantasy aren't 140 minutes of ugly revenge fantasy. After all the smoke has cleared and blood's been spilt, Reynolds zeroes in hopefully on a ridiculous bit of prison graffiti indicating that God will avenge all wrongs--funny, here I was watching a meticulously premeditated period Death Wish that runs at least thirty minutes too long.

The Count of Monte Cristo is just like the deli sandwich that bears its name: lots of ham, lots of cheese, and covered with a sickly sweet coating to disguise its excess and excrescence until just after (or during consumption of its second half). Richard Harris comes off best as Edmund's mentor/Don Diego, Pearce has a blast as a loathsomely fey scoundrel, and Wincott and JB Blanc as an insouciant pirate king (a character greatly expanded from the novel though still underused) have moments in smaller roles. As soon as Harris goes sweetly into that dark night, however, charisma vortex Caviezel dons Old Scratch facial hair and does his best Chris Sarandon impression, sucking the life out of the rest of the movie. Combined with Reynolds's chronic inability to resist stupid camera flourishes (and keeping the boom microphone out of frame), and Ed Shearmur's relentless, apalling score, The Count of Monte Cristo collapses into something insensate. Stick with the sandwich: it costs a couple of dollars less than the price of a movie ticket. Originally published: January 25, 2002.