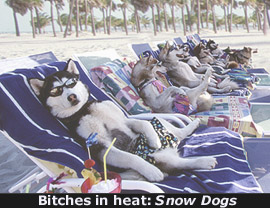 by Walter Chaw Brian Levant's Snow Dogs counts on adult audiences rationalizing that although it was terrible, at least their kids liked it. Why is it that the standards we hold for our children are substantially lower when it comes to the movies? (And if kids will probably like anything, why not expose them to something a little less offensive than Snow Dogs?) It isn't so much that Snow Dogs finds its humour in a black man getting humiliated by a pack of dogs who are smarter than him, nor that it also mines for yuks by placing a black man in mortal peril because of his suicidal stupidity. No, the moment that Snow Dogs crossed a line for me was when Cuba Gooding Jr., an Oscar-winning African-American actor (one of, what, six?), gets comically treed by a ferocious dog.

Gooding Jr. has come full circle in his career: he played an unspeakably reprehensible Stepin Fetchit figure eight years ago in Lightning Jack, and finds himself in Snow Dogs playing a similar slapstick caricature who spends his time alternating between screeching in terror and mugging shamelessly. When James Coburn appears as a tiny Alaskan community's requisite snarling maniac (the cast is late-period "Northern Exposure", quirk for quirk's sake), of course it is his job is to torment Gooding, and wouldn't you know it, his name is Thunder Jack. If Snow Dogs were made with Tim Allen as originally intended, the gags would surely remain unfunny and exhausted, but at the least they wouldn't touch on the eye-rolling pickaninny archetype that was for so long an ugly staple of American cinema.

Ted Brooks (Gooding Jr.) is a successful Floridian dentist with both an assistant (Sisqó) and a mother (Nichelle Nichols, who used to answer the phone for Captain Kirk) played by actors incapable of delivering dialogue. Because Snow Dogs never tires of taking the racial stereotype shortcut to comedy, we know that one of Ted's parents is white because Ted loves Michael Bolton. Because Snow Dogs is a cinematic thumbscrew and Levant is a friggin' sadist, Michael Bolton provides several songs for the soundtrack and makes a stupid (as if he could make any other kind) cameo as himself.

One day Ted discovers that he's adopted and that his birth mother has died, leaving him her home in nowhere, Alaska. Travelling there amidst limp cracks about his blackness and Alaska's whiteness, he runs up against two veteran white actors (Coburn and M. Emmett Walsh), each of whom, judging by their stasis and lack of discretion in role choice, died three years ago. Super-bimbo Joanna Bacalso, turning in the worst non-Lorraine Bracco performance of the past several years, appears as another in an endless line of tough-as-nails, tender-as-lace backwoods barkeeps.

By my resigned count, there are about twenty flaccid dentist jokes, about a hundred dog reaction shots (many computer enhanced in that eye-bugging, eyebrow-raising way that commercials rendered impotent years ago), about five minutes in which Cuba isn't throatily expressing his bemusing panic or his resiliency to physical mortification, and about a dozen times that I checked my watch. For as racially appalling as Snow Dogs reveals itself to be, it also manages to slip in a pro-life, pro-family message right at the end that honours its instinct to stereotype by turning its blunt rapier to fundamentalist right-wingers (who, in fairness, probably don't all hate black people and single mothers).

Snow Dogs is a family film that shows a man being mauled by seven dogs, hooked in the leg and dragged off a mountain, scared up a tree, submerged in freezing water, chased by a bear (that, like the dogs and a skunk, digitally laughs at our hero), and forced to bounce lines off of Joanna Bacalso. It's never funny on purpose (its funniest two moments come when Nichols and Bacalso actually have a scene together, and when Thunder Jack and Ted are teetering on the edge of a summit), and its conclusion is so rote and telegraphed that it actually feels brand new. Snow Dogs is terrible and, worse, it's feckless--and it's going to be fairly popular for a couple of weeks, as most Disney brand "family films" are. That should depress you. Originally published: January 18, 2002.