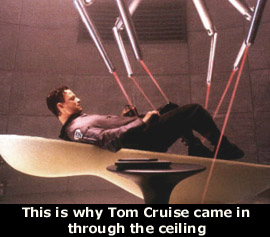 by Walter Chaw Mouldering in a can for over a year (the film would smell pretty stale regardless past 1980), Impostor is the umpteenth adaptation of a Philip K. Dick story (whether directly or indirectly), a fable of identity that pales in comparison to an acknowledged classic like Blade Runner, an ambitious blockbuster like Total Recall, and an under-seen sleeper like Screamers. Overseen by professional bad director Gary Fleder, Impostor would I suspect most like to invite comparisons to two Harrison Ford films--Blade Runner and The Fugitive--but ends up best resembling, in its dour overreaching and intimations of future-shock resonance, the late, unlamented Dylan McDermott/Iggy Pop vehicle Hardware. Although the increasingly reptilian Gary Sinise seems game with all of his Steppenwolf method in tendon-popping tow, his sickly earnestness seems misplaced in an exercise that is essentially a strobe-lit pseudo-philosophical sci-fi opera that a major studio wisely declined to release for twelve full months. Future employers of actor Mekhi Phifer take note: with this and O, it appears that hiring the lad is all but inviting a lengthy release delay.

An opening spaceship screensaver seemingly swiped from Wing Commander summarizes that we are at war in 2079 with the evil, anonymous Alpha Centurians. With mankind seeking shelter underground or beneath the protection of blue electromagnetic domes, the enemy devises a new threat: an exploding "replicant" (a robot that resembles a human), an idea that sort of reminded me of the time Wile E. Coyote tried to kill the Roadrunner with a girl roadrunner bomb. Enter brilliant peacenik weapons researcher Spencer Olham (Sinise) who, on the morning some project of his that makes him wax rhapsodic about Oppenheimer is set to deploy, is arrested by ESA ("Earth Security Administration") heavy Major Hathaway (Vincent D'Onofrio). Convinced that Olham is in fact an alien robot bomb (not a bad description for the film, come to think of it), Hathaway is allowed a lengthy exposition detailing how the bomb, hidden in the heart (and in place of the soul, one surmises), will only detonate when it's close to the prescribed target. This is an important thing to remember, because it renders the pivotal moment of the film nonsensical, unfair, and ludicrous. In truth, there are so many black holes in Impostor that trying to keep track of them would tax Hawking.

I don't want to take a lot of time detailing how both Spencer and his perfect doctor wife Maya (Madeleine Stowe) are so without shading and controversy that you figure there must be a good reason Hathaway suspects Spencer of being a cyborg explosive (hence undermining any tension). Nor am I particularly interested in discussing just how stupid the interrogation sequence is and how easily Spencer escapes it, or how poorly lit and framed the film needs to be for one to repeatedly mistake the African-American Phifer (as Cale, post-apocalyptic hooligan with a heart of gold) for Sinise. I also hesitate to mention that it's completely impossible to decipher what's happening in any of Impostor's fight sequences, and that the technology of 2079 seems mainly to involve voice-activated showers, flying cars, and a medical scanner device that looks like a cross between the laser thing from Goldfinger and the plastic surgery thing from Logan's Run. In fact, all I really want to dwell upon is the fact that the most likable character in the film, Spencer's best friend, gets a pathetic three lines and two minutes of screen time. (He's played by the always-good Tony Shalhoub.)

The one interesting quandary the film poses involves a moment of altruism from a character later found to be artificial--but even this is a concept worried over to greater success in innumerable superior entertainments. Impostor wants to be a poignant examination of humanity, but as neither Sinise nor Stowe nor D'Onofrio ever convince that they are human, there's not much surprise or pathos should one, all, or none of them turn out to be machines. So essentially, it fails as philosophy, it fails as science-fiction, and it fails as an action film. Still, Impostor would have passed as an agreeably inane bit of noisy nonsense if not for a poorly thought-out and arbitrary closer that reeks of desperation and explains by itself why the film rotted for so long before being dumped into the tepid post-Oscar doldrums. Originally published: January 4, 2002.