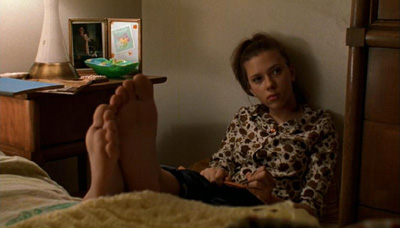 by Walter Chaw Editor Éva Gardos's An American Rhapsody, her first film as writer-director, is riddled with inconsistencies, lacklustre performances, and convenient platitudes that are perhaps not terribly surprising for a debut screenwriter and director, but disheartening from a veteran cutter who gained experience with the likes of Hal Ashby and Peter Bogdanovich. The problem with an autobiography, after its inherent onanistic self-absorption, is that it will too often hide behind the aegis of truth to excuse a multitude of narrative sins. An American Rhapsody is deeply felt, no question, but it jerks and lurches along without much regard for secondary characters, continuity, motivation, and coherence. It is ultimately little more than an episodic patchwork of over-burdened vignettes that among them share only a desire to manufacture unearned pathos and manipulate events towards the most expedient solution.

Margit and Peter (Nastassja Kinski and Tony Goldwyn), with their young daughter Maria (Mae Whitman) in tow, flee the Stalinist regime taking over their native Budapest in the winter of 1950. Left behind is their second daughter, the infant Suzanne, who, after her grandmother Helen (Agnes Banfalvy) is arrested for crimes against the state, gets sent to live with a poor peasant couple somewhere in the Hungarian countryside. The early escape sequences, unsupported by background information and shot in black-and-white (popularly employed to depict fascist oppression), at once betrays Gardos's fatal weaknesses as a storyteller and her grave overreliance on convention.

The picture then flashes forward six years to grandmother Helen leaving prison and young Suzanne, played by fantastic newcomer Kelly Endresz Banlaki, acquiring a visa via the Red Cross to go live with her once-intelligentsia, now-blue collar parents in America. A split narrative follows Suzanne's impossibly bucolic upbringing with the sad-eyed peasant couple whose performances hinge on forlorn expressions and dire pronouncements ("One day, they will take her from us, papa!"), while in America, Peter and Margit toil as a vacuum cleaner salesman and a diner waitress, respectively, both characters glossed by Gardos.

A pair of housewives befriend Margit, offering her an upside-down cake before vanishing, their brief appearance having served as a minor plot device. Suffering the same fate is a relatively major character, George (Zoltan Seress): after being the catalyst for flight in the prologue, he is relegated to serving as a chauffer before likewise disappearing. Of all the egregious assumptions and elisions made by An American Rhapsody, when teenage Suzanne returns to Hungary to mawkishly rediscover her roots, no attempt is made to explain why she doesn't seek out George, the key figure in her parents' decamp and in her own deliverance.

As the fifteen-year-old Suzanne (played by the suddenly ubiquitous Scarlett Johansson of Ghost World) discovers smoking, drinking, and boys to the chagrin of her frantic mother, she decides to make a pilgrimage back to her homeland to find purpose. It is clear neither how she expects to accomplish this remarkable transformation nor that her minor rebellions are unusual enough to merit a complete re-examination of her existence (save for an incident with a rifle). Mostly, however, it's unclear how the Deep Dark Secret imparted upon her by morose grandmother Helen serves to explain Margit's gross misbehaviour and correct Suzanne's.

An American Rhapsody can be broken down as a prologue and two pictures minus a concluding act. One film is partially effective, with a six-year-old child pulled from a Maxfield Parrish conception of a native woodcut and thrust into a strange capitalist wonderland infested with Coca-Cola, hamburgers, television, and Elvis. The second film is a dreadful collection of clichéd mother/daughter tensions pulled from every moralizing tear-jerking period coming-of-age drama and watered down ("I was worse," confides Gardos in the press notes) to such an extreme extent that when Margit drops her own iron curtain down on Suzanne's normal-seeming puberty, she comes off as unjustifiably hysterical, even tyrannical. An American Rhapsody condemns communism in its prologue but condemns capitalism initially; it shows an escape from unreasoning fascism in its opening minutes, yet has Margit embody unreasoning fascism in its second act. The source of the film's atonal disconnect appears directly attributable to Gardos's inability to champion a clear viewpoint in a story that is very obviously too personal for her to have anything approaching perspective on the actual effectiveness of the story.

If An American Rhapsody is a tale of two films, it is also a tale of two actresses. The remarkable talent Kelly Banlaki conveys a gamut of natural emotions with a purity that brings the proceedings the closest they come to honest--and heartbreaking. As her older counterpart, Scarlett Johansson has the quality of an early Lili Taylor, exuding a skittish, wounded intelligence, but in An American Rhapsody she's given only a rough caricature to inhabit. Banlaki commands the early portions of the film as a beacon of stunned confusion in the midst of the forced artificiality of an eternal Norman Rockwell Americana. Her plight draws the eye and her performance moistens it; in a beautifully shot scene--the movie's best--rich with subtext and melancholy, she wakes up in California, dons her peasant rags, and loses herself in the wilderness of identical suburban track houses. Tellingly, the signature moment for Johansson is an inert, if lovely, scene with Susan, having journeyed back to Hungary, leaning insouciantly against a wall festooned with anti-American graffiti; a bride and her groom pass in languorous slow motion. While An American Rhapsody is initially interested in the process of loss, it gradually becomes ensnared in the trap of passive and ignorant observation.

The most maddening thing about the aggressively well-intentioned An American Rhapsody is that Gardos possesses a truculent adolescent's intractable misunderstanding of the mother's contentious trials as protector, the father's mysterious role as provider, and the teenager's status as an over-romanticized Byronic rebel. Gardos says that, "Often during shooting, memories would come flooding back. A scene would bring tears to my eyes and I realized I was getting a chance to grieve over things I'd never had a chance to grieve about before." Consequently, Gardos commands the film from the perspective of a wilful child. Margit's sudden devolution into a household tyrant, all huffing regrets and impotent gesticulations, and Peter's unexplained disappearance for nearly all of the latter half (reappearing briefly from the ether just to bestow a convenient airplane ticket on his troubled daughter) speak to a puberty-collared vision of reality.

An American Rhapsody succumbs to the pitfall of approaching a subject so unnervingly intimate that gross problems in script, performance, and direction are overlooked and forgiven as, "Well, that's how it happened." The film is oddly disjointed for all its attempts to ingratiate, strangely listless for all its invested passion, and mysteriously static despite its abundance of overheated reunions and tearful goodbyes. An American Rhapsody suffers wounds so traumatic that no amount of painful sincerity, occasionally striking cinematography, and breakthrough performances by young child actors can salvage it. It is a film best described as a photo album of priceless but anonymous family snapshots, wistfully narrated for an audience of strangers. Originally published: August 24, 2001.

THE DVD
by Bill Chambers Paramount's DVD release of An American Rhapsody has its share of flaws. The 1.77:1 anamorphic widescreen transfer is lacking in the area of fine detail; the image also appears oversaturated after the film's transition from (low contrast) black-and-white to colour. At first, I thought my eyes just needed time to adjust, but the intensity of the primary reds, blues, and greens never really settles down into something that looks intentionally heightened. There's not much wrong with the accompanying 5.1 Dolby Digital audio, though the mix's only fireworks occur during the introductory escape sequences and even then are minimal at best. Extras include the original theatrical trailer and a full-length commentary by Gardos (sounding an awful lot like Lorraine Bracco) with friend/co-producer Colleen Camp in which they often mistake clichés for innovation. (They seem to think that An American Rhapsody is the first film to depict teenaged characters who underestimate their parents' struggle.) One thing I did learn from them: Johansson (as in Scarlett Johansson) is pronounced "Yo-hansson." Originally published: January 31, 2002.