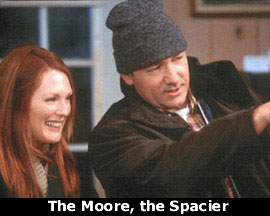 by Walter Chaw In 1994, E. Annie Proulx was plucked from obscurity to win both the Pulitzer Prize and the National Book Award for The Shipping News, her second novel. The story of "large, white, stumbling along, going nowhere" Quoyle struck a nerve with its combination of lyricism and evocation of the provincial "foreignness" of Newfoundland, Canada. Personally, though I found Proulx's prose intoxicating, the book's final thirty pages seemed discordant and atonal to me--they betray the mood with a kind of desperate urge towards resolution that feels contrary to the quirky, steady melancholy Proulx had established. (It comes as little surprise that the end of the novel was written before the rest of it.)

The Shipping News is really the tale of a man broken free of his moorings, left to nurture a relationship with a troubled daughter and to discover his roots. A little direly, the weight of symbol in the novel is placed on a clapboard home clinging stubbornly to an exposed peninsula, there by steel cables that hum in the rising wind. The second film from producer Irwin Winkler employing a house as an extended metaphor this Oscar season (he directed Life as a House), the troubled big-screen production of The Shipping News finally comes to life with Lasse Hallström at the rudder and Kevin Spacey and Julianne Moore in the lead roles. (At various stages of the project's development, co-stars as diverse as John Travolta & Kelly Preston and Billy Bob Thornton & Meg Ryan were attached.)

Quoyle (Spacey) has a one-night stand with volatile biker strumpet Petal (another miscast turn for Cate Blanchett) that results in a baby, Bunny (portrayed by triplets Alyssa, Kaitlyn, and Lauren Gainer). When Petal dies in a karmically correct car crash scant days after Quoyle's abusive father kills himself and his wife, Quoyle takes Bunny and moves back to his ancestral home in Newfoundland with his aunt Agnis (Judi Dench). Quickly securing a job at the local newspaper run by wizened fisherman Jack Buggit (a pitch-perfect Scott Glenn), Quoyle courts the freshly widowed Wavey (Moore), interacts with Newfie journalists Tert (Pete Postlethwaite), Nutbeem (Rhys Ifans), and Billy Pretty (Gordon Pinsent), and uncovers secrets about the family reserve.

Once the poetry of Proulx's novel is lost to expansive and chilly shots of Newfoundland in "late spring," the film must find its footing in its characters and the relationships between them. To that end, Spacey's Quoyle is a confused emptiness at the centre of the film. It's the actor's third bad performance in a row--he should be more careful with the arc of his career. Spacey just isn't good in irony-free parts; for Quoyle, he employs a flat, non-descript East Coast accent that fades in and out depending on the level of sincerity he's trying to convey. Incalculably worse than that, Spacey mistakes "shy and awkward" for "mentally challenged." Without a strong anchor, The Shipping News hems and haws along the outside of the relevance and poignancy it so desperately desires. Julianne Moore has moments of truth here and again, but she, too, suffers from an accent that proves distracting and ephemeral. Making an impact on the fringes are Glenn in what may be his best performance, and of course Judi Dench, who nails that peculiar Newfie accent more often than not. It's clear that the hiring of Hallström was intended to capitalize on the Irving-esque elements of the screenplay (writer protagonist, father/child dynamic, cast of eccentric supporting characters), but The Shipping News is not only no Cider House Rules, it's barely The World According to Garp.

The Shipping News is remote and jumbled. It begins with unwelcome flashbacks and dream sequences and ends as weakly as the novel; the closing minutes are a series of unearned surprises and too-tidy resolutions. While a late addition of prologue and epilogue voiceover (late as in a week prior to release) goes some way towards clarifying that Quoyle isn't mentally challenged for the first thirty minutes, it otherwise does little to improve the film's overall quality. The Shipping News misses the details that made source material sing, and though the scenery is often breathtaking in its post-apocalyptic blight, Hallström's movie is as staid and impenetrable as the frozen loam on which he sets its foundation. Originally published: December 26, 2001.