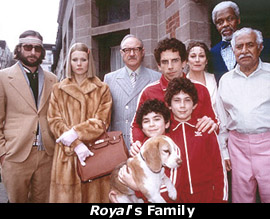 While striking a tone somewhere between the two, The Royal Tenenbaums is as irreverently structured as the best of Kurt Vonnegut Jr. and as meticulously peopled with a gallery of grotesques as a John Irving novel. More importantly, it honours the fractured fable-making of the former and the serpentine family dynamics of the latter without falling into the built-in pitfalls of pretension and preciousness. It provides for Gene Hackman his best role since his whip-wielding sheriff in Unforgiven, and as the third film for writer-director Wes Anderson, it marks his coronation as the most exciting and distinctive American voice in cinema since the Coen brothers or Jim Jarmusch. Though it's difficult to call a film "genius" after a single viewing, The Royal Tenenbaums has that aura that only comes about through a rare synergy of an immaculate eye and a dexterous ear. It is that rare work both instantly satisfying and possessed of slower rewards, tantalizing with a promise of a continued unfolding, so meticulously has every scene been packed with pithy minutiae. Notice the little stencils that decorate bedclothes, pay attention to the wonder embedded in an observation about a hawk's feathers and the thought with which a derelict's skeleton is exhumed, and note with careful consideration the subjects of every piece of art on every wall.

En route to being a singular, somewhat alien, artistic fabrication, The Royal Tenenbaums connects on a multitude of personal levels. What begins as something perverse and wickedly scathing like Anderson's own Rushmore ends as a quieter and deeply touching satire. There is something at work in the film that stirs the memory even as it riles the soul--a point of recognition that surpasses consciousness. You may not recognize Richie and Margot, Royal and Etheline, Pagoda and Chas (or you may, as the height of mannered theatricality), but they inculcate themselves so quickly and easily that Anderson has clearly touched upon archetypes in their genesis. I compared The Royal Tenenbaums to Kurt Vonnegut Jr.--let me amend that by saying it recalls the best of Kurt Vonnegut Jr.: a Slaughterhouse 5 or, more specifically, a Cat's Cradle.

The screenplay, by Anderson and Owen Wilson, is, to that end, a mellifluous, labyrinthine thing, indescribably delicious and ambitiously literate. It deals with sacrifice and family mythologies, loyalty and dynasty. With neither irony nor schmaltz, the film is about what is really important in life, at once ineffable and immediate poetry. I was also reminded of Terrence Malick's The Thin Red Line in the ways that the characters, while remaining distinct, reflected the unifying hand of one creative and intellectual ideal. It's the aspiration for all good art to touch upon the universal in our condition even as it tells a story that is unique and true to itself. In that lofty regard, The Royal Tenenbaums succeeds as well as or better than any other film from 2001.

There is a scene towards the end of the film in which two people fall over a fence and land in a Japanese stone garden. Coming at the end of a frenetic chase, one character says to the other, "I think I need help." The Royal Tenenbaums is lost souls finding help from the people connected to them forever. It is a hopeful film, a challenging film, and a beautiful film. The Royal Tenenbaums is a brilliant film. Originally published: December 26, 2001.