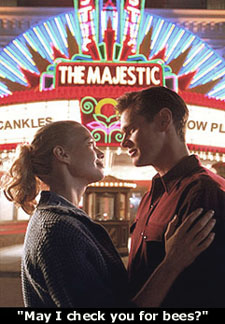 by Walter Chaw The Majestic begins promisingly enough; I wondered for a while if it was riffing on the short story "Mars is Heaven" (from Ray Bradbury's The Martian Chronicles), wherein Martians recreate a bucolic midsummer's evening in Springfield for visiting astronauts, only to murder the terrestrial interlopers in their blissful sleep. I actually held out hope that the Rockwellian Lawson, CA of The Majestic was going to be like that for amnesiac screenwriter Peter Appleton (Jim Carrey), who washes ashore there after a whimsical bridge accident. If only The Majestic were some kind of Truman Show/"Twilight Zone" construct along these lines, but no such luck: Frank Darabont's latest film, a creepily painstaking reproduction of Frank Capra's Americana and Capra's wide-eyed vision of American justice, betrays not a hint of invention. The Majestic is a manipulation so fearful of controversy that it inadvertently forgives both the film industry it apparently mocks and the witch hunters it seeks to excoriate.

As The Majestic begins, Peter is taking notes from studio executives wishing to replace the lead character in his latest screenplay with a lovable dog. After discovering that he's been named a communist sympathizer and thus made the studio blacklist, an inebriated Peter converses with a stuffed monkey (the second time in two films the Academy Award-coveting actor Carrey has shared a scene with a toy primate, indicating to me that he either doesn't really want that Oscar or needs a new agent) and drives off a bridge in his Mercedes convertible. If you're thinking It's a Wonderful Life (and Darabont surely is, as we see a poster for that Capra film in a theatre lobby later on), consider that George Bailey's life changes as he is in the process of suicide; Peter Appleton's changes when he swerves to avoid killing an opossum.

When Peter comes to during an impossibly golden sunrise, washed up (get it--washed-up?) on a well-kept beach just outside of Lawson, an immaculate nightmare of a small town, he is awakened by--you guessed it--a lovable dog. This would seem to suggest a kind of self-awareness, but please allow me to disabuse you of any notions of wit, post-modern or otherwise, The Majestic may have. Although what follows Peter's awakening is increasingly inevitable, a spoiler warning is in effect: Peter will be brainwashed into believing he is Harry Trimble's (Martin Landau) long-lost war hero child, Luke; Peter will fall in love with Luke's old sweetheart, Adele (Laurie Holden); Peter will refurbish the town's old movie house; Peter will filibuster before HUAC; and Peter will ultimately be accepted for who he is by his adopted town. The only surprise in The Majestic is, in fact, that Peter does not at any point tearfully exclaim of a crushed flower, "Zuzu's petals!"

The film is humiliating to watch. Mark Isham's soaring John Williams-esque score holds your hand through weepy-eyed confessions, cheap underdog uplifts, Witness-style barn-raisings, desperately contrived cliff-hangers, and dying fathers who just want to touch their beloved boys' faces one last time. It is pornography or slasher cinema for the squeamish middle-class: every pre-fabricated epiphany is string-scored to elicit the easiest response. I would offer that the reaction aroused by a bloody axe to the head is as unsurprising as that of an aged dad greeting a prodigal son thought deceased, in particular if there are violins involved. When it's revealed that HUAC has turned Peter's Mr. Smith Goes to Washington-style speech about "my America" (he's aided by a leather-bound pocket edition of The Constitution given him by his sweetie, natch--can you stand it?) into an "outing" of one of Peter's old flames, I thought The Majestic had, despite itself, offered an interesting point about the difficulty of standing up to Joe McCarthy and his crusaders. But when Peter's lawyer (Ron Rifkin) assures him, "Peter, don't feel bad, who do you think implicated you," suddenly The Majestic sinks to the level of "they've already been named anyway," an excuse some name-namers used to justify their own cowardice and malice.

The set design and David Tattersall's cinematography capture Rockwell's terrifying perfection and Hopper's lurid isolation, despite the intended swell of the story and Darabont's deification of Capra's naivety. I suspect that if you were to turn down the sound and watch The Majestic as merely a collection of images that there's a very powerful, very unsettling film beneath the bullshit. Consider: the kiss behind the screen as it reflects Gort destroying an army; that although the film is about the blacklist the theatre in the film is playing Kazan's A Streetcar Named Desire; or the indelible images of two opposing (and imposing) mobs (one "malign," one "benign") and how they seek to claim Peter to their group will and societal standards. Note the unintentionally fascinating shot in which Peter and Adele are stalked by an entire town.

Even smaller moments, like the quietly menacing dolly-in on a kindly caretaker (Gerry Black) and the unearthing of a monument to Lawson's ("lost sons" the name implies, or "law's son," what Peter eventually becomes) fallen sons would come across, I'm sure, with far greater impact devoid of their insipid music and unbearable dialogue. The Majestic is, alas, overburdened by the dead weight of its own dim-witted aspirations and leaden narrative. However mawkish and overlong, it's so visually arresting that you might think you've seen a better film. Make no mistake, Mr. Carrey will have to wait at least another year before Oscar comes calling. Originally published: December 21, 2001.